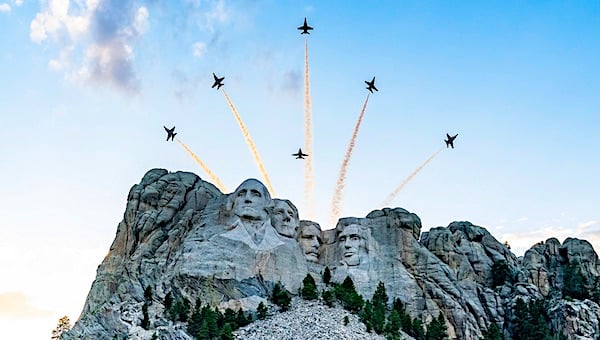 There are a few locations that are iconic for July 4th festivities and fireworks.

New York harbor with the Statue of Liberty.

The Mall in Washington, D.C.

But that location isn't going to see any of those events on the holiday this year, because the federal government had determined that Indian tribes might be offended.

That was one of a list of reasons for the rejection of the plans sought by the state of South Dakota, which incidentally also was rejected in its bid for festivities at that site last year, too.

A federal court case still is pending over that restriction.

The Tampa Free Press reported the Interior Department made the decision and "masked" its reasoning "in a fog."

Michelle Wheatley, a spokeswoman at the national memorial in the Black Hills, claimed, "After careful consideration, the NPS [National Park Service] has determined that we are unable to grant your request for this permit to hold a special event with fireworks at the Memorial. …Based on the information provided in the application, we have determined that multiple such criteria are present for the requested event, each of which would be independently sufficient to deny the request for a permit."

The letter claimed the event would threaten the environment, including the local water supply, it would offer the potential for a wildfire, it would interfere with the park's own activities, it would disrupt operations of the park's food vendor and would create objections from tribes.

"Fireworks are viewed by multiple tribes as an adverse effect to the traditional cultural landscape. The Memorial is committed to furthering the Nation-to-Nation relationships with tribal governments," Wheatley said.

She had to admit that the Trump administration obtained an agreement with tribes for a fireworks show when he was president.

But she still said the event would not be "safe and reasonable."

Gov. Kristi Noem reacted, "Mount Rushmore is the best place in America to celebrate our nation’s birthday – I just wish President Biden could see that.

"Last year, the president hypocritically held a fireworks celebration in Washington, D.C., while denying us our own event. This year, it looks like they are planning to do the same."

Noem noted the "reasons" for the denial mostly were addressed previously, and those reasons "are not in good faith."