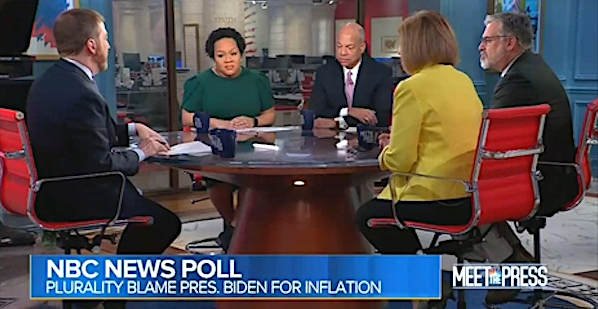 A panel on NBC's "Meet the Press" found a "huge red flag" in the network's latest congressional election poll, which has the Republican Party uncharacteristically in the lead on the generic ballot amid inflation and war.

Host Chuck Todd noted Sunday that the Republicans 46-44 lead is the first time the party has led in NBC's generic ballot since September 2014, the Media Research Center's site Newsbusters reported. And the Republicans advantage actually is greater.

"There is always a little bit of a Democratic add because Democrats are more packed in more districts here," he said. "This is a huge red flag!"

"It's a huge red flag, and it's coupled with the idea that people are blaming President Biden's policies for inflation," she said.

"That's going to be a hard thing for Democrats to overcome and to message about," she said.

Todd noted gas prices and inflation amount to "a regressive tax" that "impacts people harder farther down the socioeconomic ladder."

Panelist Steven Hayes, editor of the Dispatch, said Biden and the Democrats are doing poorly because the economy isn't getting better and Biden is "not willing to do the kind of things, I think, both with respect to the war and the economy that might actually help."

Hayes said Biden's left-wing base, which insists on a radical, green energy policy, won't let him do practical things to bring down gas prices.

Todd noted that contrary to the White House's messaging, only 6% of voters blame inflation on Russia's invasion of Ukraine. NBC found 38% blame Biden while a majority blame something else.

She observed that "three of the last four Presidents have lost control of the House of Representatives in their first midterm election."

IMPORTANT NOTE: As a result of today's ruling Democrats' galactic spending, their destruction of businesses and careers by ruinous pandemic lockdowns and mandates, encouraging people not to work by offering endless government "relief" programs, and purposely crippling America's massive oil, gas and coal industries, inflation is now raging at uncontrolled and ever-rising levels. Though the "official" inflation rate is 7.9%, the real rate is arguably double that percentage, since the official rate is calculated based on the government's consumer price index which economists say purposely underestimates inflation. After all, gasoline is at its highest price ever, construction materials have increased in price well over 20% during 2021, beef is up 21%, corn up 39%, wheat 37%, coffee 108%, and so on. The reality of all this and much more is devastatingly documented and helpfully explored in the March 2022 issue of WND's critically acclaimed Whistleblower magazine (available in both print and digital editions), titled "THE LOOTING OF AMERICA: How the elites are robbing everyone else through runaway inflation and skyrocketing prices."