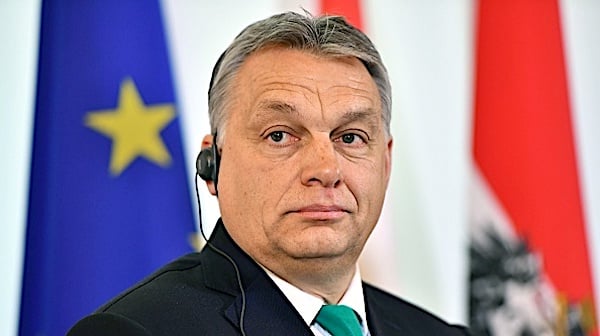 Hungarian Prime Minister Viktor Orban addreses a press conference with his Austrian counterpart at the Chancellery in Vienna on January 30, 2018. (Photo by JOE KLAMAR/AFP/Getty Images)

Hungarian Prime Minister Viktor Orban long has been recognized as a renegade – the leader not willing to submit to a globalist agenda or mandates from the established power structure.

He began his career objecting to Russian troops in Hungary, and they were removed a short time later. He moved his nation toward a free-market economy, led its entry into the North Atlantic Treaty Organization, urged the adoption of a constitution outlining conservative moral themes and defended national sovereignty.

He further outraged the establishment by erecting a fence on his nation's border to disrupt the flow of illegal aliens coming from the Middle East and Africa.

And even while fighting COVID, his nation enacted legislation that banned school content "deemed to promote homosexuality and gender change."

Now he's warning that the COVID-19 pandemic was just a prelude to a "serious stress test" that will be coming from the United Nations and the World Economic Forum.

His comments were captured and translated by the RAIR Foundation, whose name represents "Rise Align Ignite Reclaim."

He cited the U.N.'s Agenda 2030 campaign and charged that it is nothing less than global government tyranny that enslaves all humanity.

His comments came during a state-of-the-nation speech in Budapest to the Chamber of Commerce on Feb. 19.

The foundation report said he was "spot-on" about private property, traditional culture, and the need to resist and withstand the next crisis.

He said the Agenda 2030 plan, formerly called Agenda 21, combined with the WEF's Great Reset plan, would force the world into a society where "ownership is obsolete, privacy is non-existent, and … globalist organizations achieve complete control."

That, he said, is a "serious stress test, much greater than this pandemic."

"By that time in 2030, our nation, our national community including its economy, must be in a condition [that enables us] to withstand those challenges there and then, and even use them to prosper!" he said. "This is what is ahead of us…"

The RAIR Foundation describes itself as a "grassroots activist organization comprised of everyday Americans leading a movement to reclaim our Republic from the network of individuals and organizations waging war on Americans, our Constitution, our borders and our Judeo-Christian values."

During his speech, Orban cited an agreement that was signed between the Chamber and the government, and said he is confident it will help "our great national strategic goal of economic growth of two to three percent above the European Union rate every year, and when European economies are stagnating and going downwards, we must move on an upward trajectory; and around 2030 when there will be all sorts of big shifts in the world, which I don’t have time to talk about now, but from America to the European Union, a lot will happen."

The foundation report explained, "Most media ignored the portion of PM Orbán’s speech, which alludes to the UN’s 'Agenda 2030', a corporate-government fascist scheme. In the 1990s, the United Nations drafted 'Agenda 21', their so-called plan for defeating 'climate change.' In 2015, it was re-branded by socialists into 'Agenda 2030,' neither had anything to do with 'global warming' and everything to do with reshaping our world according to their socialist vision. Then last year, the push for Agenda 2030 wasn’t just about climate change but a blueprint for so-called 'sustainable development' worldwide."

The foundation report charged that the U.N. document actually describes "nothing less than a global government takeover of every nation across the planet. The 17 stated 'goals' of Agenda 2030 are code words for a corporate-government fascist agenda that will imprison humanity in a devastating cycle of poverty while enriching the world’s most powerful globalist corporations and individuals."

Orban's messages resonate with the Hungarian population because, RAIR's report said, "Hungary has had to fight off the Islamic Ottoman Turks, the Nazis, and the communists in the last century. As a result, Hungarians are generally not fond of the idea of sacrificing themselves to Globalists aiming to change societal norms and customs."

Orban said his nation "first and foremost" must fight "any socialist economic policy."

There is where private property is important, he said.

"I believe that private property has the power to create culture. And it creates a good culture, a culture on which a good life can be built, and on which, a nation can build its own future. Therefore, our basis remains private property. We want people to have their own homes, their own savings, their own land, their own gardens, their own tools. We are convinced that this is not only good for the economy, but it also reinforces the culture of taking care of things and therefore of our own lives."