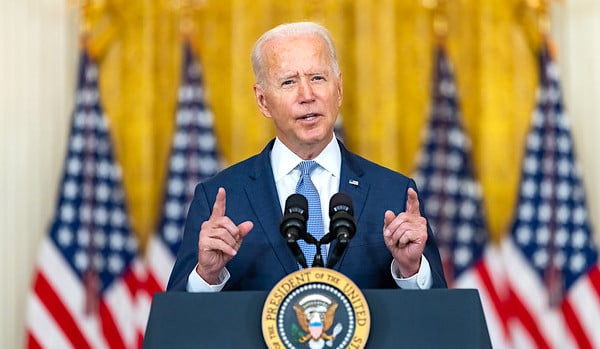 Just a collection of plastic case parts and electronic circuits, Hunter Biden's laptop computer, abandoned at a repair shop, has been in the headlines for months already.

It's revealed his trafficking with prostitutes, his influence on biolabs in Ukraine, his business deals involving overseas power players and influencers.

It was revealed by the New York Post just before the 2020 election but a coalition of legacy and social media companies conspired to suppress the reporting, a move that a poll later suggested allowed Joe Biden to win an election he otherwise would have lost.

Now that laptop are being described as a national security threat.

It is Margot Cleveland, a senior contributor to the Federalist, who clerked for a federal appellate judge for years, who wrote about her concerns.

The Daily Mail, with access to a copy of that hard drive, said the Russian government's claims that "Hunter Biden helped finance a U.S. military 'bioweapons' research program in Ukraine" "may well be true."

That, the report said, is according to "emails and correspondence obtained by DailyMail.com from Hunter's abandoned laptop."

The report explained "the emails show Hunter helped secure millions of dollars of funding for Metabiota, a Department of Defense contractor specializing in research on pandemic-causing diseases" and he also "introduced Metabiota to an allegedly corrupt Ukrainian gas firm, Burisma, for a 'science project' involving high biosecurity level labs in Ukraine."

Cleveland explained, "While these developments add another scandal to the long list of Biden family dirty laundry, the more urgent concern for the country should be the continuing threat to our national security posed by a compromised President Biden and the possibility that Russia has access to the catalog of compromising material contained on Hunter’s laptop."

She continued, "Mere weeks before then-President Donald Trump and Joe Biden faced off in the November 2020 presidential election, The New York Post published emails obtained from a laptop Hunter Biden had abandoned at a repair shop in Delaware. Those emails revealed that during the elder Biden’s time as Barack Obama’s vice president, Hunter engaged in a pay-to-play scandal, trading off his father’s position to strike deals with players in Ukraine and China. The venture was a family one, with Joe 'the Big Guy' Biden listed in one email as set to receive a 10 percent cut of one pending deal and Hunter telling his daughter in another message that 'pop' took half of his earnings."

But the information was suppressed, with even a letter from "more than 50 former senior intelligence officials" falsely claiming it was Russian disinformation.

But now even The New York Times has finally confessed the laptop is real, and now come details from the Daily Mail about the laptop explaining how he secured millions of dollars in funding for Metbiota, a DoD contractor doing research on diseases.

The revelation came just a day after Russia’s State Duma speaker, Vyacheslav Volodin accused President Biden with being "involved in the creation of bio laboratories in Ukraine," a statement that also accused Hunter Biden of that funding project.

"While none of the emails released on Friday support Russia’s claim that the Ukrainian labs were used to research or create bioweapons, propaganda need only hold a sliver of truth to serve its purpose," Cleveland wrote. "And the cache of emails contained on Hunter Biden’s abandoned laptop provides Putin and his comrades enough evidence to seemingly confirm the Russian government’s earlier claim that Hunter Biden helped implement a bioweapon program in Ukraine. This false framing also provides Russia ammunition to justify its attack on its neighbor to the west."

Such a claim by Russian, that Hunter Biden's emails confirm a biolab in Ukraine "raises a serious question with huge national security implications: How did Russia know the day before The Daily Mail’s exclusive that the Hunter Biden’s investment fund, Rosemont Seneca, had invested in Metabiota and been involved in Metabiota’s operations in Ukraine?" she wrote.

"The timing of events last week suggests Russia has access to the same emails as The Daily Mail or that Vladimir Putin’s agents might well have obtained access to Hunter Biden’s first laptop – the one the president’s son believed Russians had stolen in 2018. In either case, the Biden family corruption documented on the laptops has gone from a potential national security risk to a real one—and in the midst of a war launched by Russia on a country bordering North Atlantic Treaty Organization allies."

She said the Bidens, intelligence agencies and "the corrupt media" now are responsible "for the danger Americans now face."

"Even when coupled with the complicity of former members of the intelligence community, all of Joe Biden’s lies would mean nothing if the media had done its job and reported the story when it still mattered. It’s too late now, however: Biden is our commander in chief and Putin potentially holds a cache of compromising information perfect for propaganda purposes," she warned.