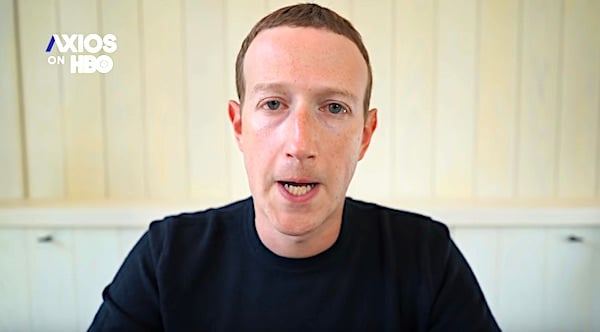 It's already been confirmed by a study that Mark Zuckerberg's decision to donate some $420 million to various leftist elections officials across America to "help" them accommodate COVID during the 2020 president race essentially "bought" the vote for Joe Biden.

Now a report from the Office of Special Counsel in the state of Wisconsin has determined that those actions also violated the state's bribery statutes.

Margot Cleveland at the Federalist has posted an explanation of the stunning verdict.

Then on Tuesday, "the special counsel provided a second interim report to the state legislative body, noting the report 'is final in the sense that it provides a list of recommendations with time for the Legislature to act before the close of its session in March.'"

The report, 136 pages, said it was not challenging the certification of the 2020 results in Wisconsin, one of several battleground states that went narrowly for Joe Biden. Its goal, instead, is to recommend ways to avoid another election that results from criminal activity.

"Our state has a deep, progressive history and is suspicious of private entities engaging in governmental activity," the report said. "Clerk's offices should be (and in 2020 were) adequately funded by state and federal entities, as appropriate, but outside grants should be disfavored or prohibited, especially where those grants have any conditions on them."

Regarding Zuckerberg's money, the OSC report said Milwaukee, Madison, Racine, Kenosha and Green Bay all agreed with the Center for Tech and Civic Life, funded by Zuckerberg, to "facilitate in-person and absentee voting."

But those agreements "where a city's election officials receive CTCL or other's private money to facilitate in-person and absentee voting with a city facially violates Wis. State. 12.11's prohibition on election bribery…" it said.

The report charged, "The record created by public document requests shows that CTCL, a private company headquartered in Chicago, engaged in an election bribery scheme. CTCL reached out to the City of Racine to allow CTCL to provide grant money to certain handpicked cities in Wisconsin to facilitate increased in-person and absentee voting in cities…. This first grant of $100,000 was to be split among the five largest cities in Wisconsin at $10,000 per city, plus an extra $50,000 to Racine for organizing the five cities. This first grant required the mayors of the five large cities in Wisconsin and their respective staffs to complete CTCL election administration forms, including goals and plans to facilitate increased in-person and absentee voting in their respective cities and 'communities of color' and develop a joint plan for elections only in these cities and not statewide."

The money being handed out by Zuckerberg – outside of any existing campaign funding regulations – was not random, and was for his political purposes.

"It was the intentional culmination of meetings or virtual meetings," the report said. "Meetings" that were "secretive."

But the moneys were not offered to any other jurisdictions in Wisconsin, the report pointed out. And the requirement was that the money was to be used for "communities of color."

One of the contractual demands was that cities had to place absentee ballot drop boxes "in targeted neighborhoods" even though those drop boxes are illegal in Wisconsin.

The investigation did not have as a goal to challenge the 2020 certification.

But Gableman's report said it was to fulfill "the duty of all citizens of our State and our nation to work hard to secure our democracy for this generation and the next."

The Federalist noted, "From the details exposed in Monday’s special counsel report, the state legislature has much work to do to address 'the numerous questionable and unlawful actions of various actors in the 2020 election.' The first unlawful action, according to the report, concerned the payment of grant funds to five Wisconsin counties that were used to facilitate voting. That arrangement, Gableman wrote, violated Wis. Stat. § 12.11, which prohibits election bribery by providing it is illegal to offer anything of value to or for any person in order to induce any elector to go to the polls or vote."

The Federalist reported, "According to the report, Priscilla Chan and Mark Zuckerberg providing financing that allowed the Center for Tech and Civic Life to offer nearly $9 million in 'Zuck Bucks' to Milwaukee, Madison, Racine, Kenosha and Green Bay counties. In exchange, the 'Zuckerberg 5,' as the report called the counties, in effect, operated Democratic get-out-the-vote efforts. Those grant funds then paid for illegal drop boxes to be placed in Democratic voting strongholds."

The report explained, "The Zuckerberg 5 also violated the federal and state constitutional guarantee of equal protection, according to the special counsel report. The grant money targeted specific voters for special voting privileges, to the disadvantage of similarly situated voters located in other Wisconsin counties. The report also detailed troubling evidence the Zuckerberg 5 counties allowing private groups working with the granting organization, the Center for Tech and Civic Life, to 'unlawfully administer aspects of the election,' including in one county where one organization was unlawfully embedded in local government election administration."

The WEC also engaged in illegal activity, with his "illegal directive to clerks to ignore the state election code governing voting in nursing homes. In several nursing home locations throughout the state, 100 percent of registered voters cast a ballot in the 2020 election—an unheard-of rate that included many ineligible voters."

Officials with the Thomas More Society said their own private investigation of Wisconsin's election came up with many of the same conclusions.

That work, with the Wisconsin Voter Alliance, "reveals multiple violations of election law by the state officials charged with the duties of conducting safe, fair, and legal elections."

A spokesman for Thomas More Society said, "The serial nature of the election violations brought out in the special counsel’s report contradict election officials’ claims of a perfect Wisconsin election. Investigations into election integrity and litigation will be necessary until progressive organizations and election officials stop intentionally violating Wisconsin law."