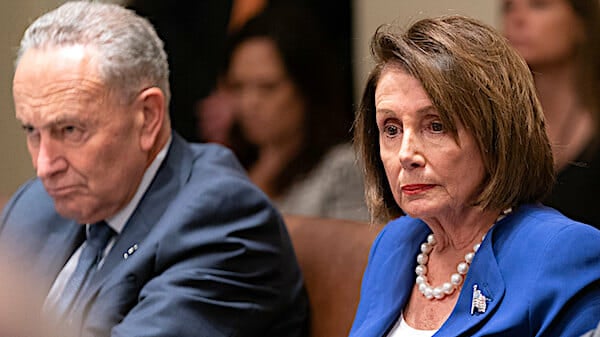 Those who are likely to vote in this fall's midterm elections see Democrats as out of touch and largely ineffective, which bodes ill for the party that is trying to cling to the narrowest of majorities in both the U.S. House and Senate.

That's according to a longtime Clinton pollster: Douglas Schoen.

He and his business partner, Carly Cooperman, wrote this weekend in a commentary for the Hill that it looks like the party could be looking at substantial losses in November.

"Indeed, the findings of our survey — which was conducted among likely 2022 midterm election voters — show that the electorate is increasingly pessimistic about the direction in which President Biden and Democrats are steering the country and feel that the party’s priorities do not align with their own," the two said.

In fact, 54% said Biden and the Democrats – a party that has lurched repeatedly toward leftist causes and agenda items in recent years – should retreat from that direction.

"In order to have a fighting chance in the midterms — as well as a shot at holding on to the presidency in 2024 — Democrats need to embark on a broader course correction back to the center," they explained. "The party needs to show voters that they are focused on solving problems and addressing quality-of-life issues and that they reject the progressive left’s embrace of big government spending and identity politics."

Sixty-one percent of respondents said Biden and his Democrats are "out of touch with hardworking Americans" and "have been so focused on catering to the far-left wing of the party that they’re ignoring Americans’ day to day concerns" like surging inflation and violent crime, they explained.

"Equally concerning for Democrats, there is a clear sense among the 2022 electorate that the state of the country has deteriorated since Biden became president and that he has not lived up to expectations."

They explained Biden is getting approval from only 45% of the respondents – even though other polls have him as much as 10 points lower than that – and a plurality is of the opinion that "Biden has done worse as president than they expected."

Biden is facing numerous disasters, including some of his own making like the issue of the porous southern border, inflation, Afghanistan, a failed domestic agenda, and more.

"As inflation has risen, the economy has become a particular area of vulnerability for Democrats. Indeed, voters’ growing economic pessimism is one of the driving forces behind their dissatisfaction both with the current state of the country as well as with Biden," they wrote. "Biden’s approval rating on handling the nation’s economic recovery is 21 points underwater (59 percent disapprove, 38 percent approve). This marks a notable 17-point decline from our December polling, when Biden’s approval rating on the recovery was negative 4 points, 50 percent to 46 percent."

And most voters blame Biden for inflation – which is now at its highest level in 40 years.

"As violent crime surges across the country — a trend that voters are nearly universally concerned about (85 percent) — by a 2-to-1 margin, voters blame Democrats over Republicans for rising crime rates (52 percent to 25 percent). Further, Republicans are trusted over Democrats to reduce crime (49 percent to 34 percent)," they wrote.

The commentary said, "Collectively, our data paints a picture of a Democratic Party that is unable to connect with voters on basic 'kitchen table' issues, namely the economy and crime."