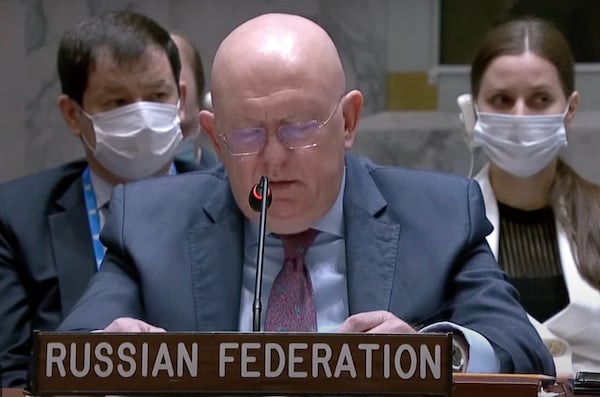 The U.S. ambassador to the U.N., Linda Thomas-Greenfield, strongly denied the allegation, accusing Russia of spreading "disinformation" to "fabricate allegations of chemical or biological weapons to justify its own violent attacks against the Ukrainian people."

Russia's Nevanzya claimed the Ukrainian labs are enhancing lethal pathogens such as the plague, anthrax, cholera and tularemia using synthetic biology and sending them to Russia through migratory birds, bats and insects.

"Ukraine agreed to make their country into a biological lab and their citizens as Guinea pigs," Nebenzya charged.

Thomas-Greenfield stated emphatically that Ukraine "does not have a biological weapons program."

"There are no Ukrainian biological weapons laboratories by the United States ... not near Russia's border or anywhere," she said.

Moscow, she added, has "a track record of falsely accusing other countries of the very violations that Russia itself is perpetrating."

On Tuesday, U.S. Undersecretary of State for Political Affairs Victoria Nuland was asked during a Senate hearing whether or not Ukraine had chemical or biological weapons.

She gave a guarded answer in which she neither denied or confirmed it.

"Ukraine," Nuland began, speaking slowly and deliberately, "has biological research facilities which, in fact, we are now quite concerned Russian troops, Russian forces may be seeking to gain control of."

Nuland said "we are working with the Ukrainians on how they can prevent any of those research materials from falling into the hands of Russian forces should they approach."

The State Department later described the labs as Soviet-era facilities that the U.S. has helped Ukraine convert to research of infectious diseases.

Steven Hatfill, a former pandemic adviser to the Trump administration, doesn't believe the labs in Ukraine have been working on bioweapons. He told Steve Bannon on the "War Room" program Friday that the labs are not "high containment" but rather institutions open to inspection focused on public health.

Dr. Robert Malone, the inventor of the mRNA technology platform that later was used in the Pfizer and Moderna COVID-19 vaccines, weighed in on the biolab issue on his Substack page, noting that in addition to being a physician, vaccinologist, virologist and molecular biologist, he has worked in biodefense and medical countermeasure development for decades.

His experience includes working on infectious disease outbreaks with scientists at the U.S. Army Medical Institute and the Defense Threat Reduction Agency.

Malone quoted an unnamed colleague familiar with the Ukrainian bio-labs who said they "fulfill a vital mission in global surveillance of emerging infectious diseases."

Malone said that, "assuming best intention," his current "working hypothesis" is that the U.S. partnered with the government of Ukraine "to (at a minimum) support collection, storage and monitoring of infectious biological agents and toxins by researchers in Ukraine, and there seems to have been some component of personnel training and facilities engineering involved with this."

But he believes the partnership between the U.S. Department of Defense and the current government of Ukraine was "ill advised," providing Russia with "some semblance of political cover for military actions."

He advises the Defense Department to turn over inspection reports to congressional investigators and the general public to dispel concerns and reduce tensions. That's particularly important, he said, in light of the erosion of public trust in the U.S. government and the international community over the past two years resulting from their handling of the pandemic.

A report one year later by the U.S. National Academy of Sciences' Committee on Anticipating Biosecurity Challenges of the Global Expansion of High-Containment Biological Laboratories said the Odessa laboratory "is responsible for the identification of especially dangerous biological pathogens."

"This laboratory was reconstructed and technically updated up to the BSL-3 level through a cooperative agreement between the United States Department of Defense and the Ministry of Health of Ukraine that started in 2005. The collaboration focuses on preventing the spread of technologies, pathogens, and knowledge that can be used in the development of biological weapons," the report said.

Zakharova said Russia had evidence the Ukrainian health ministry ordered the destruction of samples of plague, cholera, anthrax and other pathogens before the Russian invasion began Feb. 24. She described it as "an emergency attempt to erase evidence of military biological programs" financed by the Pentagon.

Pentagon spokesman John Kirby reacted, calling the claim "laughable" and suggesting Moscow itself may be preparing to use a biological or chemical weapon.

"The Russian accusations are absurd, they are laughable and you know, in the words of my Irish Catholic grandfather, a bunch of malarkey. There's nothing to it. It's classic Russian propaganda," Kirby said.

"It’s Russia that has a long and well-documented track record of using chemical weapons, including in attempted assassinations and poisoning of Putin’s political enemies like Alexey Navalny," she wrote on Twitter.

The European Union on Wednesday said the credibility of Moscow's claim is "very doubtful."

The EU, he said, was not aware of any Ukrainian laboratories that violate international law.