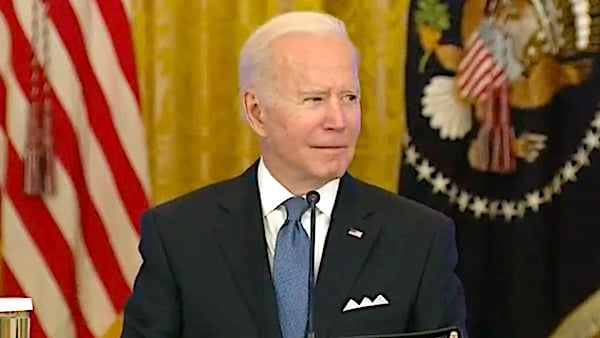 President Joe Biden is caught on a hot microphone calling Peter Doocy of Fox News 'a stupid son of a b*tch' on Monday, Jan. 24, 2022. (Video screenshot)

The White House has continued to insist that the messages on the "Hunter Biden laptop" presenting evidence that Joe Biden and his family cashed in on his position as vice president are "Russian disinformation."

But now the New York Times finally has confirmed what has been evident to anyone with a modicum of curiosity – that the emails obtained from the laptop are authentic. The Times buried that news in a story on the ongoing federal probe into Hunter Biden’s tax filings. But the "paper of record" reported the emails it obtained "from a cache of files that appears to have come from a laptop abandoned by Mr. Biden in a Delaware repair shop" were "authenticated by people familiar with them and with the investigation."

Last September, Fox News correspondent Peter Doocy asked press secretary Jen Psaki if the White House was maintaining its "Russia disinformation" stance after Politico reported a book by one of its reporters concluded two key emails and others are genuine.

The Politico reporter's book, "The Bidens: Inside the First Family’s Fifty-Year Rise to Power," cites a person who had independent access to Hunter Biden's emails who confirmed the authenticity of a 2015 email from an adviser for the corrupt Ukrainian firm Burisma thanking him for introducing him to Joe Biden. That conflicts with the president's repeated insistence that he knew nothing about his son's deals.

Later Thursday, Psaki was asked, in light of the New York Times report, if the White House still stands by the "Russia disinformation" claim. She refused to comment, curtly advising the reporter to talk to the Justice Department, because she's "a spokesperson for the United States" and Hunter Biden "doesn't work for the United States."

On Thursday, the New York Post – whose blockbuster reports on the emails weeks from the 2020 presidential election were censored by social media and ignored by news media – reported federal prosecutors have "looked into emails between the first son and his former business associates that were recovered from the laptop."

Devon Archer, who had served with Hunter Biden on the board of Burisma,  was sentenced last month in an unrelated fraud case. Archer has "cooperated completely" with the feds in their investigation into Hunter Biden, the Post reported.

The probe initially focused on Hunter Biden's failure to pay taxes since his father was vice president, but it broadened in 2018 to investigate how his international business dealings intersected with President Biden’s political career.

On Thursday, veteran Washington reporter Byron York, recounting the shameful effort of media to protect Joe Biden, recalled how the New York Times mocked President Trump for making many references to the Hunter Biden laptop during the first presidential debate.

The Times' James Poniewozik wrote: "If you listened to President Trump debate Joseph R. Biden Jr., you may have felt like you'd started watching a complicated serial drama — 'Lost' or 'Twin Peaks' — in its final season. The president kept dropping names and plot points, all seeming to reference a baroque mythology. Who was 'the big man?' What was 'the laptop?' How many seasons of this show did I miss?"

Prior to the debate, Lesley Stahl of CBS News sparred with Trump when he called it "one of the biggest scandals I've ever seen" and chastised her and CBS for not covering it.

"Of course it can be verified," Trump replied.

After the New York Post stories in October 2020, NPR's managing editor for news, Terence Samuels, explained why the public broadcast network wasn't covering a story about credible evidence that the Democratic Party's presidential candidate was running a family business that sold access to the vice president and the United States government for millions of dollars to entities such as an energy firm run by the Chinese Communist Party.