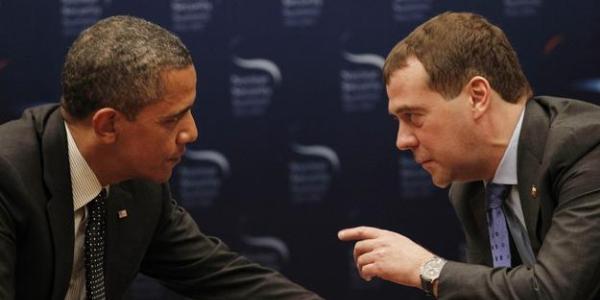 President Obama caught on an open mic on March 26, 2012, reassuring Russian President Dmitry Medvedev he would have "more flexibility" after the U.S.presidential election

Former Russian President Dmitri Medvedev, who instantly became a social media personality in the United States when Barack Obama assured him on an open mike he'd have much more flexibility after his re-election campaign was finished, now has threatened to put the United States "in its place."

Reuters reported the comments from Medvedev, still an influence in Russia even though Vladimir Putin now runs the nation, came in an interview.

He now is deputy secretary of the Russia Security Council.

"It will not work," he charged. "Russia has the might to put all of our brash enemies in their place."

Russia invaded Ukraine last month, insisting that it's "special" military assault on women and children was to defend against the Russian-speaking people in Ukraine, and that the "neo-Nazis" had to be removed from Ukraine.

The result has been a fierce defense by Ukraine that reportedly has cost some 14,000 Russian soldiers – and hundreds of millions of dollars worth of war machines already.

Also, the rest of the world has joined in a long list of economic sanctions against Russia and its leaders and billionaires, triggering outrage from those wealthy individuals who have now lost yachts, villas and more.

The Daily Mail explained how Medvedev was being used to deliver "the latest Kremlin threats against the U.S."

The remarks came after Biden had said, "Putin's brutality, and what he's doing, and what his troops are doing in Ukraine, is just inhumane," calling Putin a war criminal."

It was before Obama's 2012 election that he and Medvedev were caught on a hot mike.

At the time, there were negotiations over Russia providing European countries with a missile defense shield if the Russians would decrease their role in supporting the regime of Syrian President Bashar al-Assad.

Obama promised Medvedev he would have more "flexibility" to accommodate plans after his re-election.

Obama's promise to the Russians of "flexibility" was made at an international summit in Seoul.

"On all these issues, but particularly missile defense, this, this can be solved but it’s important for him to give me space," Obama told Medvedev.

Medvedev replied: "Yeah, I understand. I understand your message about space. Space for you."

"This is my last election. After my election I have more flexibility," Obama said.

Medvedev said: "I understand. I will transmit this information to Vladimir."

WND reported later, after Obama's second term ended, that there were questions about why the media didn't go after Obama for collusion with Russia.

WND reported, "To be clear, ace investigative reporter Sharyl Attkisson does not believe the sometimes cozy contacts between the Obama administration and Moscow amounted to collusion, but, she observed, 'under the definition currently used by Trump critics, it would be.'"

Her message was that if the media had applied the same standards to Obama that it applied to Trump at the beginning of his term, they should have gone after the former president for collusion with Russia. Probably Iran, too.

She explained at the time that, "We know factually that the Obama administration had secret dealings outside of the public and Congress with the world’s largest state sponsor of terrorism, Iran.

"And that, as part of the deal, the Obama administration unilaterally decided to return a great deal of money, in cash, to Iran in amounts that were misrepresented to the public."

Attkisson also noted that, in fact, reporters have no way to verify or know for sure what exactly transpired.

But she cited examples of Obama's close contacts with Russia:

She said at the time she didn't believe any of that was "collusion," but "under the definition … used by Trump critics, it would be."