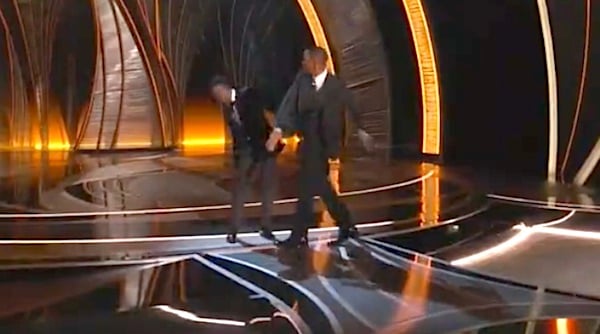 Will Smith, right, smacks comedian Chris Rock in his face during the live broadcast of the Oscars on Sunday, March 27, 2022. (Video screenshot)

(THE COLLEGE FIX) – A professor at Loyola Marymount University believes Will Smith slapping comedian Chris Rock at Monday’s Academy Awards was an example of white supremacy in action.

Smith walked on to the stage after Rock told a joke about Jada Pinkett’s (Smith’s wife) hair. “Jada, I love you,” Rock said. “‘GI Jane 2,’ can’t wait to see you.” Rock was referencing the 1997 film in which actress Demi Moore had shaved her head for Navy SEAL training.

Maia Hoskin, a visiting professor at LMU and director of counseling in the Department of Specialized Programs in Professional Psychology, writes in Forbes that Smith’s behavior “is about a much larger systemic issue rooted in white supremacist culture designed to police the behavior of Blacks amongst the who’s who in Hollywood and beyond.”