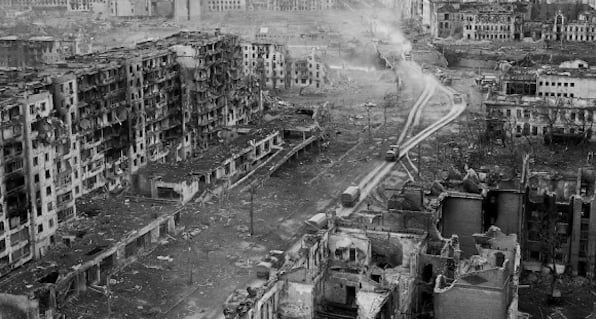 The Chechen capital of Grozny after it was leveled by the Russians during the Chechen war in the mid-1990s.

The fall of the major Ukrainian city of Kherson on Thursday marks a major turning point in the war, because Ukrainian forces mounted very little resistance and, consequently, the city of 300,000 was spared, contends Russia analyst Clint Ehrlich.

"The message to other cities is clear: Fight and be leveled or surrender and be treated kindly," he wrote in a thread on Twitter presenting his conclusion that the Ukrainians must face the grim reality that they are outmanned and Russia has shown in the past that it will show no mercy if it meets resistance.

Ehrlich, who has written for Foreign Policy and other publications, was a visiting researcher at the Moscow State Institute of International Relations.

He said that most analysts believe the odds of a ceasefire are increasing in Ukraine, but they "have it exactly backwards."

"We've actually moved closer to the nightmare scenario where Kiev is simply leveled," he wrote.

Ehrlich said there's "a real risk that we're selling the Ukrainians a false bill of goods – just like we did when we promised them NATO membership."

"They keep asking for a NATO no-fly zone because they know they can't win without it," he said. "We aren't going to give it to them."

That leaves the West with a "troubling moral quandary."

"Are we really helping the Ukrainians by encouraging them to fight?"

Ehrlich said he is "awed" by the bravery of the Ukrainians.

"But if the end result is watching [Ukraine] get viciously torn to pieces, was it really worth it?

Ehrlich noted that Russian forces have using a combination of artillery and heavy airstrikes in Kharkov, the country's second largest city.

"Large sections of the city appear to have been leveled," he said. "We have to pray that civilians were already evacuated – or the casualties will be immense."

The fear is that the Russians will use the same tactics in Ukraine's capital, which is home to 3 million people.

Ehrlich warned that the "end result of all of our cheering and all of our weapons deliveries could be a repeat of the Second Chechen War."

"The Chechens fought even harder than the Ukrainians," he noted. "They inflicted horrifying losses on the Russian army, against all odds.

"What did it get them? A Russian siege of their capital that laid it to waste."

He posted a grim photograph of Grozny after the war, commenting that it was "what so much Chechen bravery achieved."

"If the Ukrainians keep fighting hard, it's what will happen to Kiev. All while we cheer them on from the sidelines."

SITREP - Day 8: Most analysts think the odds of a ceasefire are increasing in Ukraine.

They have it exactly backwards.

We've actually moved closer to the nightmare scenario where Kiev is simply leveled. 🧵