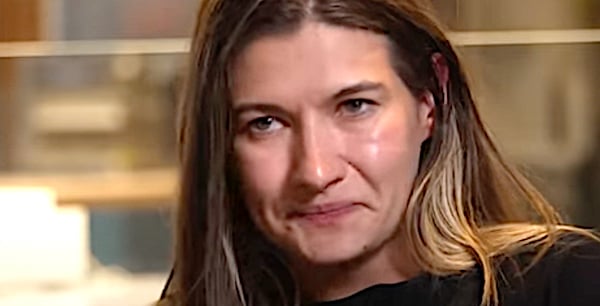 Seattle bakery owner Olga Sagan explains why she finally is giving up pushing for change in her city. (Video screenshot)

The immigrant owner of a Seattle bakery who closed a downtown shop amid record-breaking crime and drug users blocking the entrance while police stand by idly explained why she finally gave up.

After a man was shot dead around the corner of Piroshky Piroshky bakery, Olga Sagan said it finally was time to stop pushing for change.

"No one is listening. This is not new. Look at how many small businesses we have left here. We have only big businesses here," said Sagan in an interview with independent journalist Brandi Kruse.

"I'm a smart business owner. I have given up my business during pandemic. I can read signs. I can read patterns. And this is a pattern that I can't deal with anymore," she said.

She pointed to the chaos outside her window.

Kruse, a former reporter for the local Fox affiliate KCPQ, noted Sagan was visibly emotional and surmised that giving up her business was hard to do.

"Being an immigrant, coming here, getting five locations in the city, seeing how powerful the city is, the state is, the country is, how much money, how much wealth -- what wonderful, smart people we have surrounded ourselves with -- that you can achieve anything you put your mind to, when everyone works together on one goal.

"And that's what we are ending up with? It's such a waste. And it's not worth my time anymore."

The bakery has sold hand-crafted traditional Russian pastries in the Seattle area since 1992.

See the interview with Olga Sagan:

Last week, Seattle's decline into lawlessness and squalor amid a homelessness crisis and the more recent efforts to defund police and soften the punishment for crime was documented in a video by a local reporter.

KOMO News reporter Jonathan Choe showed homeless people openly using drugs and trash covering the street in front of store windows still covered by plywood some 18 months after the 2020 riots and the takeover of a city neighborhood.

The Seattle Times reported last week that the office of Seattle's new Democratic Mayor Bruce Harrell, who is trying to reverse the previous administration's push to defund the police, said in a statement that the mayor is "continuing to advocate for hiring additional SPD officers so that there are adequate staff resources to respond to public safety emergencies, bolster police presence in locations where crime is prevalent, and help reset norms downtown and citywide."

"Further, he is driving efforts specifically to prevent gun violence, including through community-based programs, regional coordination, and other innovative solutions," the mayor's office said.

Officials 'struggling to understand why'
"No city matches Seattle for electing lunatic socialists to the city council as well as Congress," wrote Powerline blogger Steven Hayward on Monday.

"So having demonized police and letting the city descend into anarchic chaos, Seattle is now surprised and 'rattled' by a sharp rise in crime, he wrote, referencing a Wall Street Journal story Monday.

The Journal said: "Long one of America’s safest cities, Seattle had 612 shootings and shots-fired incidents last year, nearly double its average before the pandemic. The city has just experienced its two worst years for homicides since the 1990s, when murder rates were at all-time highs. Gunfire has erupted all across surrounding King County, not just in neighborhoods plagued by violence."

The paper said "officials around the country are struggling to understand why."

Hayward commented: "Maybe 'officials around the country' are officially idiots.

The Journal story offered some clues, he noted.

Nightly protests in the summer of 2020 after the killing of George Floyd by a Minneapolis police officer pulled Mr. Diaz’s officers away from their focus on gun violence, he said. The city council responded by cutting millions from the police department’s budget, including cutting the salary of then-chief Carmen Best, part of a national push to reallocate police funds to social programs.

Demoralized officers have since left in droves, similar to other cities, said Travis Hill, a recently departed police sergeant who spent 14 years on the force. Letting protesters take over a precinct during the city’s unrest in 2020 was particularly disheartening, he said. “When you don’t feel the city has your back, your proactive work goes down,” Mr. Hill said.

About 360 officers left Seattle’s force in the past two years, leaving about 950 in the department to battle the rise in shootings. At the beginning of the pandemic, Seattle had 1,305 officers.

Stops and other activity initiated by officers dropped by 27% in 2021, and police response times reached historic highs, according to the department.

Hayward concluded: "I'm sure another tax increase and more social workers will fix everything."