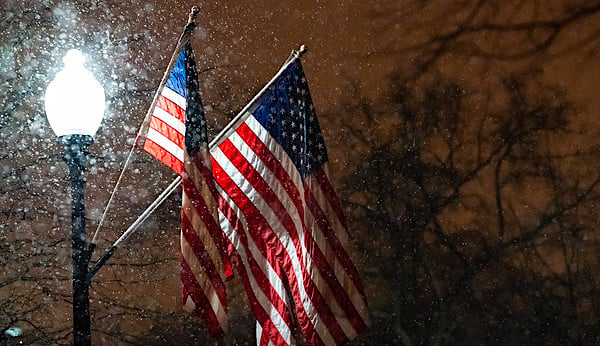 The Biden administration has allowed a more than eleven-fold increase in the number of illegal immigrant offenders let out of Texas prisons and into the general U.S. population, despite federal immigration law requiring ICE to take convicts into custody after serving their time, usually in advance of deportation.

The disclosure emerges from state-initiated litigation that is beginning to shed light on what critics call the administration's secretive and lenient handling of immigrants beginning last year – treatment that is imperiling public safety, alarmed state authorities say.

Soon after President Biden assumed office a year ago January, agents of federal Immigration and Customs Enforcement began dropping their usually automatic requests to take custody from Texas authorities of immigrant convicts set to be released from the state's prisons and jails, so they could be deported.

In the past, few such convicts were exempt from the process. From 2017 to 2020, ICE had declined to take into custody from Texas no more than a dozen such so-called "detainers" a year – typically those in poor health or with unresolved immigration issues.

But from January 2021 to February of this year, Texas law enforcement officials testified in federal court last month, ICE declined to take custody of 170 – a number Texas persuaded ICE to winnow down to 141, but still an exponential increase over the years of the Trump administration. That increase reflects the impact in just one state of the new nationwide policy.

Louisiana Attorney General Jeff Landry, whose state has joined Texas in suing the Department of Homeland Security and other federal immigration agencies over the issue, said testimony in the case being heard in U.S. District Court in Houston makes clear the Biden administration does not want the public to see how similar releases unfolded nationally in its first year.

Arizona, Ohio, and Montana are pursuing a similar lawsuit in Ohio. Last week the judge in that case, U.S. District Judge Michael Newman, appointed by President Trump, issued a preliminary injunction favoring the three states. "Can the Executive displace clear congressional command in the name of resource allocation and enforcement goals? Here, the answer is no," Newman wrote.

Perplexed and irate Texas authorities said they learned about the new ICE policy on Feb. 5, 2021, just 16 days into the new administration, upon being informed that ICE in a single day would drop detainers on 11 released inmates – a typical annual number in previous years. ICE for the most part brushed aside their complaints, Texas officials said.

“They said, 'It's coming from above and we're just following the orders,'" testified Jason Clark, chief of staff for the Texas Department of Criminal Justice. “I was alarmed by the changes that they had made,” Clark said, “and whether those persons were going to be released back into the public.”

ICE did not respond to inquiries from RealClearInvestigations.

Detainer information is not public, the Texas Department of Criminal Justice said, and thus the names, criminal records and current status of all the illegal immigrant convicts were not disclosed. "Of course, the States of Texas and Louisiana must do what they can to protect their citizens, so some of these criminal aliens have remained in state custody at the State’s expense," the states said in their original motion last year.

But in court it emerged that among those released after a "final order of removal" – and thus subject to deportation, at least in past years – was repeat offender Guillermo Torres, who was serving a five-year sentence after violating parole for smuggling more than 50 pounds of marijuana. Torres is a member of the Mexicles, a street gang with ties to drug cartels, according to Clark.

Also avoiding deportation was Ruben De Leon, who had served five years for a 2016 conviction for intoxicated assault with a vehicle and serious bodily injury, according to Clark.

Both men are now free. "We don't know where they're at," Clark testified.

In more than two dozen cases, Texas authorities' pleading managed to change minds at ICE. Initially exempt from a detainer, Clark said, was Juan Marroquin, who was being released after serving two years for molesting a 3-year-old and violating the terms of his probation. "Again, I had to intervene and call ... to ask ‘Why is this person not being deported?’" Clark said.

He was less successful in the case of Jose Lara-Lopez, who served two years for sexually assaulting a 16-year-old. ICE officials dismissed Clark's pleas, and "again reiterated that this was the new guidance that was coming down," he said.

Precisely how many convicts have been released under the new policy nationwide is one of numerous questions that former ICE officers and others say the Biden administration refuses to answer. Citing unnamed sources within DHS, the Washington Times reported on March 16 that in 2021, ICE  issued 46% fewer detainers to law enforcement agencies than it had the year before, while arresting 48% fewer convicted criminals and deporting 63% fewer criminals.

ICE did not respond to questions from RCI about the accuracy of the unreleased figures, or when it plans to release a more comprehensive and detailed annual report the agency has provided in the past.

The administration's lack of transparency, former ICE officers and others say, is notably reflected by the withholding of ICE’s long delayed annual Enforcement and Removal Operations (ERO) report, which should provide statistical detail about how the agency and its field offices are handling the record surge of immigrants.

Traditionally, ICE has presented that report in December, two months after field offices turn in their data to headquarters. Those reports have provided a full complement of facts and figures on arrests broken down by crime categories, detainers and more. The agency did not meet that deadline.

Instead, on March 11, ICE released a shorter, congressionally mandated "annual report," which lacked much of the detail and precision of previous Enforcement and Removal Operations documents. The 31-page March report contains just seven pages addressing Enforcement and Removal Operations in general terms, while the comparable fiscal 2019 report had 32 pages dedicated exclusively to ERO.

“My biggest concern is people will think this is the enforcement report - it’s not,” said Jon Feere, an analyst with the Center for Immigration Studies who was a Trump administration appointee who served at ICE from 2017 to 2021.

The annual report and an accompanying press release stressed how new ICE policies, crafted through three separate memos issued between January and September 2021, were intended in large part to ensure that U.S. immigration enforcement operations “uphold our values as a nation,” according to acting ICE Director Tae Johnson. To that end, the Biden administration stressed “prioritization” and “discretion” for field officers deciding when to make an arrest.

As it proclaims these values, critics say, the March report obfuscates critical data. While a total number or arrests is given – “74,082 administrative arrests of noncitizens” – there is no breakdown of where or when the arrests were made. It also introduces new categories such as “aggravated felons” that traditionally were not used by the agency and lack precision.

“The Biden administration is doing everything in its power to keep criminal aliens in our communities, and the reason they haven't released the [ERO] report is because they don't want the public, or the courts, to fully understand the harm to public safety and national security they've created,” Feere said. “Thousands of deportable criminal aliens are in our neighborhoods precisely because of this administration, and the public deserves transparency.”

ICE’s March release also lacks data that would allow a comparison of what current ERO operations look like on the border and in the interior, an important metric in terms of evaluating both the agency’s effectiveness and pinpointing where issues with public safety may be most acute.

Both Feere and Robert Moore, liaison to ICE at Texas Criminal Justice, said the ICE agents and officials they’ve spoken with are fuming over the new policies they are forced to follow, and the blanket the administration has thrown for months over the genuine annual report.

The White House issued a version of the report earlier this year, but veteran ICE bureaucrats refused to sign off on what they regarded as a whitewash, Feere said.

“I don’t think they’re very happy about it,” Moore testified in the Texas lawsuit as he recounted phone conversations with ICE officials about dropped detainers.

One goal of the Biden administration’s secrecy, experts said, may be to keep federal judges who are dealing with litigation over new immigration policies unclear on what exactly has happened. In his preliminary ruling in Ohio, however, Judge Newman expressed little confusion while siding with Arizona, Montana, and Ohio. He wrote that the administration's 2021 memos that stress "prioritization" and allow wide discretion in ICE arrests violate the clear intent of Congress.

After Texas and Louisiana won a preliminary injunction last year against the Biden administration's new DHS policies, the case has returned to federal district court after the 5th Circuit Court of Appeals narrowed the ruling.

Thomas Homan, whom President Trump named acting ICE director from January 2017 to June 2018 after more than three decades with the federal immigration service, testified as a witness for the two states. Homan told RCI that the current policies reflect a desire to relax immigration law and that in the process the administration is gambling with public safety.

“There’s been no valid reason for the drop in detainees and crime rates haven’t gone down, we know that,” Homan told RCI. “Public safety is significantly threatened by this. They don’t really want to arrest these people and remove them.”

Federal government lawyers have argued that the litigation amounts to a disagreement over policy, and that Mayorkas' memos fall within the discretion Supreme Court decisions have given secretaries to craft such procedures. The states countered with the same argument Judge Newman supported, in that DHS is ignoring clear congressional intent.

Some longtime ICE agents told RCI that what happened in 2021 merely accelerated disturbing trends and policies that have bedeviled the agency since the Obama administration. They also agreed with concerns raised by Clark, Feere, and others that rather than lead to increased safety, the new policies have effectively paralyzed ICE operations by subjecting them to prior approvals, review boards, and the like.

The upshot is a kind of national sanctuary policy, according to Homan and others. During the Trump administration, several cities controlled by Democrats refused to comply with ICE’s own detention requests, instead springing some illegal immigrants that in the past would have been deported.

Homan pointed to the case of David Mora, an illegal immigrant who killed his three daughters, their chaperone, and himself in a Sacramento church. The Merced County Sheriff’s Office said California’s sanctuary law meant ICE was never even notified when Mora was released from mental health custody last April.

“We don’t know if ICE is getting anyone out of Rikers Island, Cook County, or L.A. County jails,” Homan said, referring to New York, Chicago and Los Angeles. “They’ve left a bunch of data out, but it’s clear the new policy has failed memorably and the real report must be devastating.”