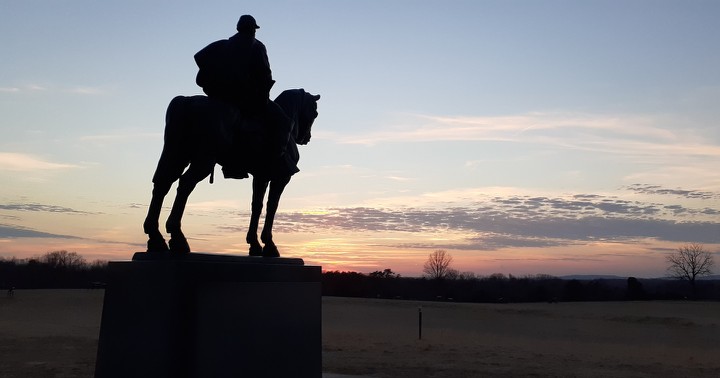 "There is Jackson standing like a stone wall! Rally behind the Virginians!"

Many years ago, in my capacity as California state director of the American Family Association, I had the great privilege of sitting at the head table next to Hollywood legend Jane Russell at a special banquet of Eagle Forum California in honor of its founder (and Ms. Russell's traveling companion), Phyllis Schlafly. Phyllis gave the most hopeful and inspiration speech I have ever heard, detailing her eyewitness view of the rise of the conservative movement from Barry Goldwater to Ronald Reagan. It was one of the most memorable milestones in my career as a Christian social and political activist.

I don't remember if she specifically cited Joseph Farah by name, but the closing crescendo of her speech emphasized the amazing potential of the internet to facilitate a quantum leap forward for the conservative movement. And, of course, Joseph Farah was THEE pioneer of online conservative media through his WorldNetDaily internet news site, whose power and influence began a meteoric rise after its founding in 1997. WND was the first online news organization to gain official recognition in the Washington, D.C., press pool (after a hard-fought battle), and Farah himself was having a profound influence on conservatism as the ghostwriter of Rush Limbaugh's second book "See, I Told You So" (which sold 4 million copies in the first two months).

Of course, the left recognized the threat to their media hegemony posed by WND and pushed back hard with every weapon in their arsenal, including lawsuits – but in the midst of that intense battle Joseph Farah stood like a stone wall, giving strength and encouragement to the hundreds of budding conservative journalists who had joined the battle in the cause of truth. Indeed, there might never have been a "new media" if not for Joseph and WND. I highly recommend his 2007 "inside story of the new media revolution" titled "Stop the Presses," which reads like a culture-war version of the history of World War II. It is really must-reading for anyone interested in overthrowing the corporate "news" industry, which President Trump famously (and truthfully) branded "the enemy of the people."

Just days ago, I experienced another memorable career milestone when I met Joseph Farah in person for the first time, when my wife, Anne, and I took him and his wife, Elizabeth, to lunch in a suburb of Washington, D.C. The next day I went back to get a selfie photo with him to put on my office shelf right next to my picture with Rush Limbaugh. It is so very satisfying to finally meet one of your culture war heroes and to discover he is just as much a champion of right and truth in person as in the image portrayed to the public.

I confess I felt something of an urgency in wanting to have this meeting at this point in time, because I am very concerned about the survival of WND. As you may know, WND and Joseph Farah were early targets of the "cancel culture," and there has been a concerted effort by the hard left to totally destroy them. Google's "demonitizing" of WND nearly killed it, and put such strain on Joseph as he tried hold things together that he had a series of debilitating strokes. That was three ago. It has been a great struggle for him to regain his health. Meanwhile, the news site continued to fight through the herculean efforts of a core team led by another of my heroes, WND Vice President David Kupelian.

To the eternal shame of the truly evil editors of the Washington Post, they ran one of the nastiest hit pieces of all time against Joseph personally, while he lay in a hospital bed just days after a massive stroke, clinging precariously to life. Thank God he survived and has recovered nearly to his former self.

I hadn't planned it this way, but on our entire drive from Memphis to the Washington area, we were from one to three hours ahead of the truckers' convoy heading to D.C. All along the I-40 and I-81, we saw patriots along the roadside and in the truck stops waiting like townies on the Fourth of July for the parade to come through. The closer we got to D.C. the more there were, until on the last 200 miles or so nearly every highway overpass was crowded with flag-waving familes holding signs against tyranny.

I wish Phyllis could have lived to see this day, because, despite all the pain the globalists have put us through in the past few years, conservatism has finally come fully of age in response to their fascism. Some of the newbies who only had their eyes opened in or since the 2016 election season might like to credit it all to President Trump, but it was the grinding slog of incremental steps against impossible odds by Phyllis and Joseph and all of the other pioneers of the conservative movement that made today's uprising possible.

Yet even in our hope and encouragement, the reality is that we may not prevail in this fight. The enemy may prove too strong and too devious. One test of whether we deserve to win is how we honor those who came before us and whose survival under enemy attack is most tenuous. Because if they kill the heroes, all the army will be demoralized.

Stonewall Jackson's courage and resolve would not have been enough to prevail against the superior numbers and power of the opposing army that day in Manassas if reinforcements had not rallied to him because of his inspiring stand.

We must not let the enemy destroy the Stonewall Jackson of the conservative media: Joseph Farah and his WND. I strongly urge you to rally to his support by giving generously to the nonprofit WND News Center and to educate all of your America First friends and allies that they owe Joseph Farah and WND far more honor and respect than they realize.

Scott Lively
Scott Lively is an attorney, pastor, human rights consultant and missionary with service in more than 50 countries. He is the author of eight books including "Redeeming the Rainbow," a textbook on pro-family advocacy and opposition the the LGBT agenda, and his most recent work "The Prodigal Son Prophecy: God's Amazing Plan for the Restoration of the Two Hebrew Houses and the Salvation of the Gentiles." All of Scott's books are offered freely in PDF and/or video form at his website https://www.scottlively.net/subscribe/. He can also be reach by email at [email protected]
Porn for priests
Pope Benedict and his recently revealed Antichrist letter
Christian Zionism? No, Christian Shilohism
The myth of the 'gay conservative'
Satan's Rainbow Synagogue
See more...