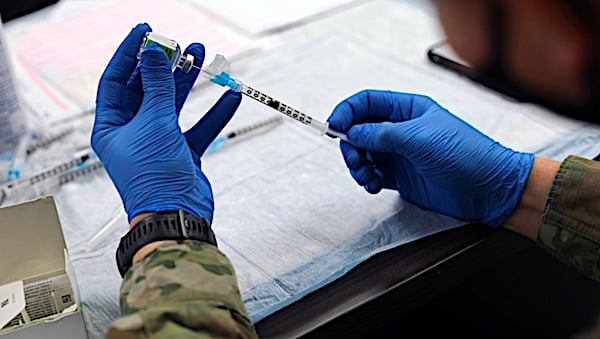 Army Spc. Anthony Spalding prepares a vaccine for an Afghan evacuee at Fort McCoy, Wisconsin, Dec. 8, 2021, as part of Operation Allies Welcome. Afghan children received their influenza vaccine, and those over the age of five were vaccinated against COVID-19. (U.S. Army photo by Pfc. Caitlin Wilkins)

An Army flight surgeon testified in federal court that she was ordered by high-level command not to discuss the controversy over Department of Defense data indicating a massive spike in serious injuries and illnesses among military personnel when the vaccines were rolled out in 2021.

Dr. Theresa Long was testifying March 10 in the case of a Navy SEAL commander who refused to receive a COVID shot. She told Judge Steven Merryday of the U.S. District Court for the Middle District of Florida in Tampa that she was observing cases of the demyelination of the central nervous system in military personnel.

As WND reported, three Department of Defense whistleblowers have presented evidence from the Defense Military Epidemiological Database (DMED) that show a nearly 1,000% increase overall in diseases and injuries in 2021 compared to the previous five years.

The non-profit Liberty Counsel, representing the commander, obtained a temporary restraining order from Judge Merryday blocking the Navy from punishing the commander because of his vaccination status. The commander asked for an exemption on religious conscience grounds, and Merryday ruled the Navy appears to be in conflict with the federal Religious Freedom Restoration Act.

The government was in court asking the judge to set aside the injunction while the case is on appeal.

Asked about the data in the Defense Military Epidemiological Database, Long said she had been "ordered not to answer that question."

"Ordered by who?" Merryday asked.

Is the U.S. government criminally responsible for the deaths of COVID-vaccine recipients?
99% (1570 Votes)
1% (15 Votes)

Long replied that the order came from high-level command.

Attorney Matt Staver of Liberty Counsel, representing the Navy commander, followed up, asking Long why the data is relevant to the case.

"I have so many soldiers being destroyed by this vaccine. Not a single member of my senior command has discussed my concerns with me," she said amid tears.

"I have nothing to gain and everything to lose by talking about it," Long said.

She added that she is willing to lose her career "because I am watching people get absolutely destroyed."

She said she regularly has been contacted by military personnel who have been injured by the shots, and most are pilots, who "have to meet one of the highest fitness standards."

Amid the pressure to get vaccinated, Long described an atmosphere of low morale in which there have been at least two suicides.

'Suppression of scientific dialogue'
The flight surgeon Chambers testified that he was ordered to make sure troops received the shots and was told that religious exemptions would be denied.

He said that up to 80% of military personnel have contracted COVID-19 despite having had two shots. However, he said, among the unvaccinated, the infection rate was 15%.

Chambers said he has had to delay his plan to retire in 2023 because he developed demyelination of his central nervous system after being vaccinated.

Tankersley, a recently retired flight surgeon, said he has witnessed during the pandemic an unprecedented "suppression of scientific dialogue."

He said the shots are neither safe nor effective, explaining the delivery mechanism of the mRNA vaccines bypasses the natural immune system and creates inflammation that can inhibit the body's innate immunity.

Tankersly said he has treated more than 200 COVID patients with no fatalities using treatments such as ivermectin. Meanwhile, the Defense Department insists that the only way to combat COVID is to force vaccination and get rid of personnel who won't comply.

Staver said in a statement that he is "honored to serve the brave men and women of the military."

"I am dismayed by the abuse and propaganda forced upon them from the White House and the Department of Defense," he said. "The truth will prevail, and freedom will win."