The hypocrisy and sanctimony playing out over the corporate media outlets about Putin's savagery is galling. For example, on Feb. 28, Sean Hannity proclaimed that a murdering thug of a leader who invades a sovereign country and kills innocent people needs to know that he will be forthrightly removed. Mark Esper, Trump's defense secretary, concurred. "For the sake of what is decent in the world," seconded Sen. Ben Cardin, a Democrat, Putin must be taken out.

Putin is savage all right, and his is a war of aggression. But how dare we?!

Remember the little Iraqi boy with a charred torso? Uncle Sam did that. 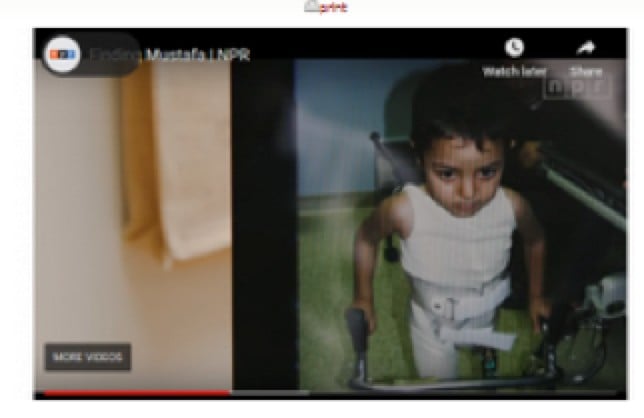 What about this armless Iraqi child and thousands like him? Did Putin disarm him? No; an American-dropped dumb bomb did. 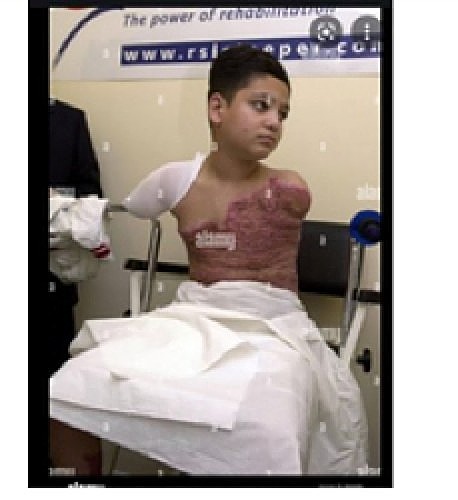 Look at little Shakira, a Pakistani tot "burned beyond recognition by a U.S. drone and left for dead in a trashcan." There were thousands of these children, every bit as precious as Ukraine's. 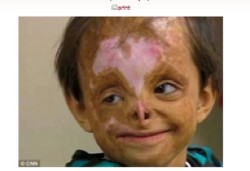 If Putin belongs in The Hague's International Court of Justice, so do Genghis Bush, Dick Cheney, Condi Rice and their countless culprits – including Colin Powell, posthumously.

America is still the undisputed leader in attacking sovereign nations and killing their kids. Russia's foreign meddling since the early 1990s is insignificant by comparison.

Nevertheless, it is always asserted, never argued, that the difference between, say, a Putin invasion and an American one is that the latter is by good people for good causes. Alas, the broken children we've shown you, now adults, have not regrown their limbs. Iraq has been destroyed for good. Not counting the number of refugees displaced internally or exiled, children orphaned, women widowed, people plunged into permanent poverty, birth defects and environmental contamination – between 183,535 and 206,107 Iraqis were killed directly due to the unprovoked American invasion. This estimation is a most conservative one. Likewise, Libya is a failed state with a vibrant slave trade. Who can argue with such a record of moral superiority?

Another insult to the intelligence is to have to endure conga lines of cretins expatiating on foreign policy – from Fox's Harold Ford to Gillian Turner to Kayleigh McEnany – when we still have Pat Buchanan. The wise and brilliant Pat has borne witness to the events of history that have shaped the conflict between Russia and Ukraine, has chronicled the run-up to this war of aggression and repeatedly and futilely counseled on how to avoid it:

We were warned. Surround Russia with NATO members, refuse to negotiate in good faith and Putin will go to war. Yet, the stance on both sides of the Atlantic has been dismissive, even contemptuous, of Putin's reasonable, long-standing security concerns.

Writes Buchanan: "When Russia's Vladimir Putin demanded that the U.S. rule out Ukraine as a future member of the NATO alliance, the U.S. archly replied: NATO has an open-door policy. Any nation, including Ukraine, may apply for membership and be admitted. We're not changing that."

Certainly, the U.S. has remained wedded to an ever-accreting, ever-inclusive, open-door, liberal vision of NATO membership. What for? Cui bono?

Indubitably, good-faith negotiations with Putin could have averted the invasion of Ukraine. Instead, the president of the Russian Federation was discounted and demeaned. Now, the failed leaders responsible should be made to eat their words.

There is something utterly obscene – as rudely shocking as the front-row viewing of the shock-'n'-awe visited on Iraq – about watching the displacement of people and the destruction of innocent lives in real time, on television, without lending a hand.

And I don't mean a military hand.

Ukraine's president, Volodymyr Zelensky – who is the toast of the town simply because he did not skedaddle from the mess in which he mired his country – to this ass with ears goes a special award for recklessness. Not fleeing a situation largely of your making does not a hero make. Curiously, we Americans have offered Zelensky the coward's way out, when we ought to have forced him to sit down with his foes.

Granted, America, as British paleolibertarian Sean Gabb quips, is "some kind of zombie apocalypse plus nuclear weapons that might not yet be past its use-by date. It has not won a war against an equally matched power since it defeated itself in 1865." However degraded, the onus is on the USA, the only so-called responsible superpower, to calmly negotiate with Putin on behalf of his innocent, weak victims. Instead, world leaders watch the suffering on TV and bemoan the fate of the sufferers. Both sides are a disgrace and a failure to have brought us thus far. Ditto NATO and the EU.

This is precisely what President Joe Biden should be shamed into doing now: Talk to Putin; thrash out a cease-fire, ASAP; haggle for the lives of the population under siege because they are led by imbeciles.

Ukrainians, for their part, are tireless and wily lobbyists in Washington, way more cunning than their American counterparts. For all intents and purposes, Zelensky, head of the corrupt American client statelet that is Ukraine, had tethered the fate of his country to America, NATO and the EU, constantly trying to bend these foolish and feckless entities to his will – too much of a clown to look out for his countrymen's safety, rather than his own popularity in the West.

Having sat out the '67 and '73 wars in Israeli bomb shelters – I still remember what old-school diplomacy and statesmanship – realpolitik – sounded like. Diplomatic tools like substantive talks, a cease-fire and an agreement between warring sides, however, have been utterly absent from the repertoire of the two tools, Presidents Biden and Zelensky.

Good old realpolitik is what Zelensky should have been practicing with his powerful neighbors and historic brethren, the Russians.

Realpolitik is practical politics, the art of getting along, differences and all, in a real world in which reality, including the differences between people and their political systems, is accepted and dealt with.

Contrary to proclamations, it is not a moral foreign policy that America practices but a moralistic one. Be like us or we'll destroy you! Instead of realpolitik, Zelensky adopted America's moralistic, impolitic, uppity manners. It took a war to get Zelensky to the negotiating table with Putin, where he ought to have been from the start.

Lastly, what had to drive the Russian Bear to distraction is the daily demented "Russia, Russia" monomania emanating from America.

The antiquated electrical grid fails. Russia. Birds fall out of the sky. Russia. Americans loathe each other. Russia. Democracy is a farce and a failure. Russia. Deplorables won an election. Russia. Deplorables elected a president: a Russian. A young and flighty Russian girl, Maria Butina, arrives in the country full of faith in the American system. She flirts with U.S. law makers, slips between the sheets with some. "A spy," we shriek! Jail her! Break the wanton waif! And, we did.

I believe that this dangerous, endless and mostly baseless barrage of bullying and berating finally helped push Putin over the edge.

Again, I grew up in Israel in a time when that country was, like Russia, vilified across the world. For the U.N. it was a daily ritual, a morning prayer, to open each session with a vote to condemn Israel's very existence. With a difference: Israel had the United States. It had the steady support of America. Russia is like South Africa, my birthplace, a friendless pariah. The ostensibly civilized world wishes its demise. As kids we felt only hatred for such a world that would heap hate upon us. South Africans felt the same. I can only imagine what Russians must feel when they hear every ignorant American TV twit talk non-stop bull's wool about their country.