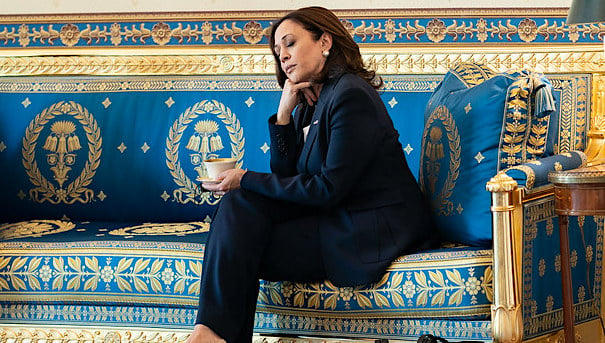 The White House has edited the transcript of a speech given by Vice President Kamala Harris after she wrongly said that Ukraine is part of the NATO alliance.

Robert Spencer in a column at PJMedia pointed out the correction to Harris' comments.

She had said, "The United States stands firmly with the Ukrainian people in defense of the NATO alliance."

On the transcript, later, the White House posted that she said, "The United States stands firmly with the Ukrainian people [and] in defense of the NATO alliance."

Explained Spencer, who characterized her flub as "stupidity," "You heard it. I heard it. The whole world heard it. Even CNN reported it. … At the winter meeting of the Democratic National Committee in Washington on Saturday, Kamala Harris said: 'The United States stands firmly with the Ukrainian people in defense of the NATO alliance.'"

Spencer explained, "Now, Ukraine is not actually in NATO, and so standing firmly with the Ukrainian people would not actually be an act in defense of the NATO alliance, and of all people, the person pretending to be vice president of the United States should know that. So over at WhiteHouse.gov, the ever-helpful anonymous wonks who record every august word and deed of the socialists, clowns, puppets, freaks, and saboteurs responsible for this period of American misrule knew that they had to do something to prevent the American people from realizing just how oblivious and out of touch our putative vice president really is.

"Voilá! Now it has her saying: 'The United States stands firmly with the Ukrainian people [and] in defense of the NATO Alliance.'"

He pointed out the use of the brackets means the "White House gremlins are tacitly admitting that she didn’t really say it. But the correction itself reduces an obvious revelation that the ostensible vice president is woefully ignorant of the basic things every public official should know to a simple slip of the tongue. She meant to say 'and' and didn’t; that’s all, MAGA rubes! Haven’t you ever had something come out the wrong way?"

Wait, does Kamala Harris really not know that Ukraine isn't a formal member of NATO? Or is she declaring that the US will treat Ukraine as a de facto member of NATO, and therefore go to war? pic.twitter.com/yil5LVHbIq