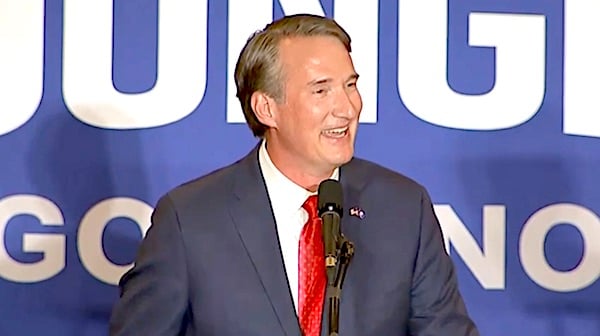 By Kevin Mooney
The Daily Signal

Government records indicate that Youngkin will rely on a mix of executive action, budget changes, and legislation to withdraw from the 11-state Regional Greenhouse Gas Initiative.

Some environmental activists and lawyers question the new Republican governor’s authority to exit the pact exclusively through executive action.

But Youngkin press secretary Macaulay Porter said the governor is committed to ending Virginia’s participation in the Regional Greenhouse Gas Initiative, a “cap and trade” agreement to limit carbon dioxide emissions that is widely known as RGGI.

“The governor pledged to withdraw Virginia from RGGI because of the unfair burden it places on Virginia ratepayers,” Porter said in an interview. “On Day One, he issued an executive order to do just that.”

“The executive action initiated the regulatory process to withdraw,” Porter added, “but he’s also supporting legislative action to make sure future governors cannot unilaterally put Virginia back into this failed and expensive program.”

Youngkin’s executive order set in motion a series of actions that will result in what it calls “a full report reevaluating the costs and benefits of participation in the Regional Greenhouse Gas Initiative,” while notifying RGGI officials that the governor intends to withdraw either by legislative or regulatory action.

The Daily Signal has requested a copy of that report, which was due within 30 days of Youngkin’s Jan. 15 order.

‘Change Not for Better’

The governor’s order provides for an “emergency regulation” enabling Virginia’s Air Pollution Control Board to consider repealing climate change regulations. Youngkin also backs a budget amendment that would start the process of withdrawing from RGGI.

In these states, government regulators impose an upper limit or “cap” on the amount of carbon dioxide emissions that power plants are permitted to emit. The initiative also creates “allowances” within interstate auctions that may be traded back and forth among companies subjected to the emission caps.

The idea behind cap-and-trade is to provide energy companies with financial incentives to reduce emissions. Companies that meet or exceed emissions targets may sell any excess allowances to companies that have not done so.

Bonner Cohen, a senior fellow with the Washington-based National Center for Public Policy Research, a free-market think tank, told The Daily Signal that he is concerned about environmental degradation that may result from Virginia’s increased reliance on solar and wind projects.

“We have been told that by joining RGGI, adopting net-zero carbon emissions goals, and embracing other schemes to promote ‘clean’ energy, we will become full participants in something truly ‘transformative,’” Cohen said in an email, adding:

Yes, transformative it will be, but the change will not be for the better. The increased reliance on wind and solar power will transform broad swaths of Virginia’s bucolic countryside and deep-blue offshore waters into a world of unsightly and inefficient industrial-scale wind turbines and solar arrays. The pollution potential caused by the disposal of used-up solar panels (tens of thousands of them), giant wind turbines, and dead batteries for when the sun doesn’t shine and the wind doesn’t blow will make the worst Superfund site look like child’s play.

On his first day in office Jan. 15, Youngkin signed several executive orders, including one to “reevaluate Virginia’s participation in the Regional Greenhouse Gas Initiative and immediately begin regulatory processes to end it.”

Virginia is not only the newest member of RGGI, but the first Southern state to join the climate pact. Northam had Virginia enter RGGI in 2020 with approval from the state Senate and House of Delegates, both controlled by Democrats at the time.

Virginia became a full participant in cap-and-trade regulations that began to set limits on carbon dioxide emissions in January 2021.

But where Northam saw the climate change initiative as a “unique opportunity” to confront the urgency of “environmental threats” facing the planet, Youngkin sees costly carbon taxes flowing from the regulations at the expense of Virginia ratepayers and businesses, without any environmental benefit.

“RGGI describes itself as a regional market for carbon, but it is really a carbon tax that is fully passed on to ratepayers, Youngkin said in a December speech to the Hampton Roads Chamber of Commerce. “It’s a bad deal for Virginians. It’s a bad deal for Virginia businesses, and as governor, I will withdraw us from RGGI by executive action. I promised to lower the cost of living in Virginia, and this is just the beginning.”

In his executive order, Youngkin called attention to a filing that Dominion Energy, the state’s largest utility, submitted to the State Corporation Commission, a regulatory agency with authority over utilities. In the filing, Dominion Energy estimated that RGGI would cost ratepayers between $1 billion and $1.2 billion over the next four years.

“Virginia’s participation in the Regional Greenhouse Gas Initiative (RGGI) risks contributing to the increased cost of electricity for our citizens,” Youngkin’s order says. “Virginia’s utilities have sold over $227 million in allowances in 2001 during the RGGI auctions, doubling the initial estimates. Those utilities are allowed to pass on the costs of purchasing allowances to their ratepayers.”

Before leaving office in January, Virginia Attorney General Mark Herring, a Democrat, issued a legal analysis in which he concluded that the governor cannot “repeal or eliminate” the regulatory requirements attached to the Regional Greenhouse Gas Initiative “solely through an executive order or other executive action.”

Herring narrowly lost his bid for a third term as attorney general to Jason Miyares, a Republican who previously was a member of the House of Delegates.

When The Daily Signal asked Miyares’ office whether the new attorney had an opinion on Youngkin’s ability to leave RGGI through executive action alone, Communications Director Victoria LaCivita said Miyares currently has no public comment on the matter.

“Because official opinions are considered confidential attorney-client privilege until issued as a formal opinion, the Office of the Attorney General cannot comment on any request we may or may not have,” LaCivita said in an email.

Critics of Youngkin’s move to withdraw from RGGI also include the nonprofit Southern Environmental Law Center, which has offices in Virginia and five other Southern states.

“This strongly supported and successful program cannot be undone by a simple pen stroke,” Nate Benforado, senior attorney with the legal advocacy group, said in a written statement in response to the governor’s executive order.

“The General Assembly gets to decide the laws in Virginia, and the executive order—which asks state officials to develop an illegal repeal—is a dead end,” Benforado said.

RGGI, he said, has produced “millions of dollars … to help communities deal with flooding and to lower energy bills for Virginians who need it most.”

Regardless of how the legal debate over the governor’s order shakes out, a Youngkin aide who asked not to be identified told The Daily Signal that “the governor is pursuing several means to remove Virginia from RGGI” and the executive action “is the first step in a regulatory process.”

A proposed amendment to the state budget (HB 29) would direct state agencies to “begin terminating” Virginia’s membership in RGGI and prohibit officials from spending related revenue without the governor’s approval.

“We are pursuing multiple options,” the Youngkin aide said.

In his executive order, Youngkin points out that more than 100,000 Virginia households were in need of financial assistance to cover energy expenses in 2019, costing the state $46 million.

Since it is evident that many Virginians are “struggling to pay their energy bills,” the Institute for Energy Research argues in a recent blog, it is “illogical [for Virginia] to participate in a program like RGGI that raises energy costs.”

The Washington-based nonprofit supports free-market policies in the energy sector.

“People benefit more from lower costs overall than by being reimbursed later on for a higher upfront cost,” the institute says in the blog.