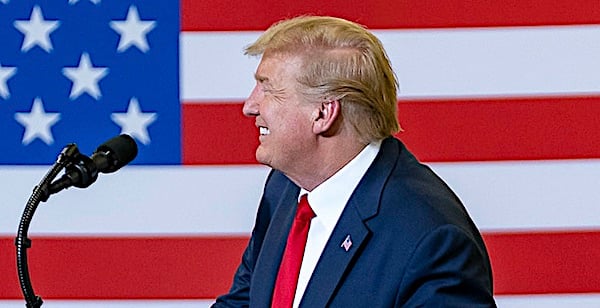 The investigation in Wisconsin of the 2020 election anomalies, which already has uncovered "widespread" problems, has been extended.

The announcement by Wisconsin House Speaker Robin Vos confirmed that a contract with former state Supreme Court Justice Michael Gableman has been renewed.

The move came just after President Trump praised the investigation and urged an extension.

He said, on social media, "The special counsel appointed by the Wisconsin Assembly to investigate the crimes of the 2020 election did an outstanding job. He discovered many pieces of evidence that indicate foul play. Anyone calling themselves a Republican in Wisconsin should support the continued investigation in Wisconsin without interference. After all of the evidence the report brought to light, how could anyone want to stop it?"

The Gateway Pundit reported after that statement, Vos said, "Media reports and the statement put out by Representative Brandtjen were incorrect. The Office of Special Counsel will remain open as we guarantee the legal power of our legislative subpoenas and get through the other lawsuits that have gridlocked this investigation."

The report explained that Gableman still is planning for subpoenas to various Democrat mayors and elections officials and voting machine companies to give him the chance to get more answers about the disputed procedures that were used in the state.

WND already has reported that a number of complaints have been filed with the Wisconsin Elections Commission over that election.

One charged that the mayor, a former mayor and city clerk in Milwaukee were involved in bribery over their actions leading up to and during the election.

The allegations are that the officials acted in violation of Wisconsin's bribery law by "accepting private money from the Center for Tech and Civic Life in order to facilitate in-person and absentee voting and to purchase and place absentee ballot drop boxes."

"Arizona, Georgia and Texas passed legislation addressing this issue; and, in Michigan, Pennsylvania, and Wisconsin, the legislature passed laws regulating this conduct, but those laws were vetoed by Democrat governors. Three other states, Minnesota, Iowa, and South Carolina have passed bills regulating this conduct, and are now waiting for those bills to be enacted," he said.

The Milwaukee complaint followed similar complaints against officials in Racine, Green Bay, Kenosha and Madison, which also asserted violations of election law and bribery of election officials by the Center for Tech and Civic Life.

The legal team explained, "The Milwaukee complaint contends that Barrett and Owczarski entered into an agreement with the Center for Tech and Civic Life, a partisan, special interest organization, to accept $3.4 million to facilitate in-person and absentee voting in the city, which is a violation of Wisconsin law. The Center for Tech and Civic Life is a non-profit Chicago-based organization, led and staffed by former Democratic activists and funded by billionaire Facebook founder Mark Zuckerberg and his wife, Priscilla Chan, to influence the 2020 election."

Kaardal explained the case details a massive scheme on the part of the Center for Tech and Civic Life to usurp the administration of the election, a core traditional governmental function.

"Under the guise of COVID-19 prevention and via the illegal dumping of private money into the municipal process, the Center for Tech and Civic Life handed control of the 2020 election in Wisconsin over to private partisan interests, in the form of its 'partners,'" the legal team said.

"We can’t undo the wrongs of the 2020 election," Kaardal said. "But it is incumbent upon us to ensure that the corruption that infected Wisconsin’s voting process is rooted out and that the state’s election integrity is preserved. Wisconsin’s voters deserve to know the truth and they need to be assured that the corruption has been eliminated, allowing for fair and honest elections from this point forward."

In Wisconsin, actually, it is illegal for anyone to "take money" to induce a voter to go to the polls.

"The evidence in this complaint is overwhelming and condemning," said Kaardal. "Even on the surface, given all benefit of doubt, there is no question that Mayor Barrett, and Clerk Owczarski accepted private money from the Center for Tech and Civic Life to facilitate in-person and absentee voting in Milwaukee, as well as illegal ballot drop boxes. This is in violation of Wisconsin election law."

WND previously reported that it already had been confirmed by a study that Zuckerberg's decision to donate some $420 million to various leftist elections officials across America to "help" them accommodate COVID during the 2020 president race essentially "bought" the vote for Joe Biden.

WND also reported that Margot Cleveland, a graduate of Notre Dame Law, a former law clerk for a federal appellate judge and a senior contributor to The Federalist, pointed out the Wisconsin Office of Special Counsel concluded that "widespread" voter fraud was evidence in the 2020 race.

She reported, "Special Counsel Michael Gableman, the retired state Supreme Court justice appointed by the Wisconsin Assembly to investigate integrity concerns about the 2020 election, vetted more than 90 nursing homes in five different counties before concluding there was 'widespread election fraud at Wisconsin nursing homes in November of 2020.'"

She explained, "According to the report, nursing home staff and administrators illegally handled absentee ballots, illegally assisted with 'marking' residents' ballots, illegally 'witnessed' the voting, and possibly included forgery of the elderly residents' signatures. Under Wisconsin law, these violations of the election code constitute fraud."

She noted that just one of the key findings in the OSC report that was given to the Wisconsin Assembly found, "Rampant fraud and abuse occurred statewide at Wisconsin’s nursing homes and other residential care facilities."

The district attorney, Patricia Hanson, then claimed she didn't have jurisdiction and she would not be filing any charges.

That's after the sheriff's investigator, Sgt. Michael Luell, explained the only legal way for residential care home residents to vote requires municipalities to send two special voting deputies, who must personally deliver ballots, which can be filled out by the voter with help from only a relative or an SVD. The deputies then must seal the ballot and delivered it to an elections clerk.

"The Ridgewood Care Center in Racine County violated every one of those mandates, Luell explained, with the Wisconsin Election Commission (WEC) holding blame for the blatant disregard of state election law taking place at residential facilities because the commission had directed municipalities not to 'use the Special Voting Deputy process to service residents in care facilities,' and to instead 'transmit absentee ballots to those voters by mail,'" The Federalist report said.

What is known about the 2020 election is that study of Zuckerberg's money concluded the results essentially were bought for Biden. Also, various state and local elections officials simply canceled their own state laws regarding mail-in ballots to accommodate COVID, actions that were not legally allowed. Third, legacy and social media all worked to conceal accurate – and damaging – reporting about the Biden family overseas business schemes just before the election. A Media Research Center study revealed had those reports been more widely published, enough voters would have turned away from Biden to cost him the election.

Bob Unruh
Bob Unruh joined WND in 2006 after nearly three decades with the Associated Press, as well as several Upper Midwest newspapers, where he covered everything from legislative battles and sports to tornadoes and homicidal survivalists. He is also a photographer whose scenic work has been used commercially.
Veteran complains about gov't incompetence, officials suggest she DIE
Lawsuit challenges election favoritism by Wisconsin city
Poll: Do voters even like Elon Musk's shakeup at Twitter?
Major U.S. city gets serious warning for using killer robots
Restaurant refuses to serve customers BECAUSE they're pro-life, pro-family
See more...