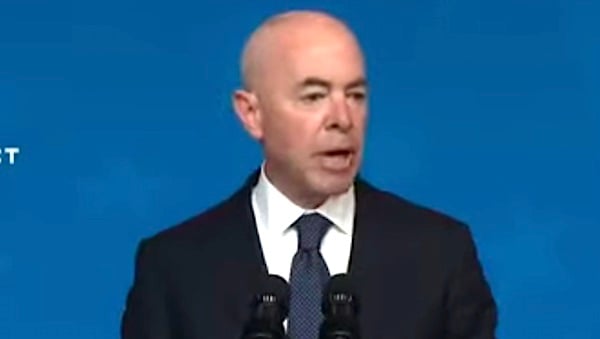 House Republicans pressed Homeland Security Secretary Alejandro Mayorkas for answers Thursday as every sign appeared to point to a rising surge of illegal immigrants trying to cross the southern border.

According to U.S. Customs and Border Protection, agents last month logged over 221,000 “encounters” with illegal aliens along the border, a 33% jump from February.

In testimony before the House Judiciary Committee, Mayorkas argued that the situation at the border is under “operational control,” as the law requires.

Republicans on the committee repeatedly rejected this claim, some saying President Joe Biden’s appointee should be impeached and removed for intentionally neglecting his duty under the law. They pointed to the huge increase in illegal immigrants trying to cross into America and what they said is a lack of policy to address the real issues driving the crisis.

Here are six highlights from the hearing.

1. ‘It’s by Design’
“The chaos on our southern border is not an accident,” Rep. Jim Jordan, R-Ohio, said during his opening statement about the surge of illegal aliens since Biden was sworn in as president Jan. 20, 2021.

Is the Department of Homeland Security manufacturing an intentional border crisis?
100% (25 Votes)
0% (0 Votes)

Border Patrol agents had 221,303 encounters last month with illegal immigrants, the highest number for one month on record, Jordan said, arguing that the increase is the result of Biden administration policies.

“President Biden on Day One said there’ll be a moratorium on deportations,” Jordan, ranking member of the Judiciary Committee, said. “He ended [the] ‘Remain in Mexico‘ [policy]. He terminated agreements with Northern Triangle countries, and he stopped building the wall.”

The big increase in illegal immigrants at the southern border is an “intentional” result of DHS policies implemented under Mayorkas, the Ohio Republican said, adding: “It’s deliberate. It’s on purpose. It’s by design.”

It wasn’t the best use of funds, Mayorkas responded.

On his first day in office, Biden halted construction of the wall along the U.S.-Mexico border.

2. ‘Inherited a Mess’
Judiciary Chairman Jerrold Nadler, D-N.Y., addressing Mayorkas in his opening remarks, said: “You inherited a mess when you took over the department, and no one can solve overnight the problems left for you by the previous administration.”

Through “neglect and often malice,” Nadler told Mayorkas, “your predecessors more or less dismantled our immigration system and ignored the grave and growing threat of domestic terrorism.”

Mayorkas echoed these sentiments in his testimony, saying, “we inherited a broken and dismantled system” from the Trump administration.

When Rep. Darrell Issa, R-Calif., challenged Mayorkas on these remarks, the homeland security secretary said he was “speaking of a broken system before the prior administration.”

The nation’s immigration system has been in need of reform for a long time, Mayorkas added.

3. End of Title 42 to ‘Make Matters Worse’
The wave of illegal aliens headed for the southern border only will grow with the end of a public health measure called Title 42, which will “make matters worse,” Jordan said.

The Biden administration has put an expiration date of May 23 on Title 42, which immigration officials have used to deport illegal immigrants from some countries quickly to slow the spread of COVID-19.

“We all know that after Title 42 is repealed, 18,000 immigrants a day are going to result, coming over that border,” Rep. Mike Johnson, R-La., said, adding that such a surge will lead to “a total collapse of operational control.”

Issa said he recently traveled to the border and spoke with Border Patrol agents who say the Biden administration effectively has ended Title 42 already.

“When we were at the border a week ago, we saw that, on your orders, orders from Washington, but I have to presume they were yours, Title 42 has already ended,” the California Republican told Mayorkas. “Your customs people were ordered to [bring in], and they were bringing in every day, as many as they could get from down in Mexico, [including] Title 42 people that had been refused, and bringing them back in.”

Mayorkas said it was “factually incorrect” to say that officials already have ended Title 42, and denied giving any order to end the measure early.

4. ‘Comprehensive’ DHS Plan
Republican and Democrat lawmakers questioned Mayorkas on his plan to address the increase in migrants unlawfully coming across the southern border.

“We understand that immigrants make us stronger,” Rep. Greg Stanton, D-Ariz., said, adding, “which is why most Arizonans support modernizing our nation’s immigration system, including a pathway to citizenship.”

“But we also know that our border must be secure,” Stanton said. “And if it isn’t secure, there are real consequences that Arizonans pay the price for.”

Stanton expressed concern over a lack of resources, specifically resources provided to nongovernmental organizations, or NGOs, to address the rise in illegal immigration.

He recently met with a mayor in Arizona whose city has been “processing about 300 migrants per day through a local nonprofit,” Stanton said, “but they’ve been told by the federal law enforcement to expect that number to jump to 1,000 per day by this summer.”

“They’re not ready” to process that many illegal immigrants, Stanton said.

“Secretary, will you commit to getting your partners the resources that they desperately need?” he asked Mayorkas.

“Congressman, one of the six pillars of our plan is to bolster the capacity of nonprofit organizations and to coordinate with the city, with local, and state officials,” Mayorkas said, referring to the six-point DHS approach to managing the expected increase in illegal immigrants.

The homeland security secretary repeatedly referenced the “six pillars” throughout the House hearing, noting that the plan is both “comprehensive” and “very detailed.”

Rep. Chip Roy, R-Texas, told Mayorkas that the only “plan” the homeland security secretary is offering is to “process aliens faster and encourage more to come.”

“That is false,” Mayorkas responded.

“It’s not false. The entirety of your plan says that,” Roy shot back.

5. Where Are 42 on Terrorist Watch List?
In one of the more lively exchanges of the hearing, Jordan pressed Mayorkas on the whereabouts of the 42 known individuals on America’s terrorist watch list who were caught attempting to cross the southern border since Biden took office.

“Forty-two illegal immigrants … encountered at our border are on the terrorist and no-fly list. Are any of them still in our country?” Jordan asked.

Jordan, whose time expired as he continued to press Mayorkas for an answer, didn’t receive one that appeared to satisfy him.

When it came time for Louisiana’s Johnson to question the homeland security secretary, he first yielded to Jordan.

“Have any of the 42 illegal migrants on the terrorist watch list or no-fly list encountered on our southwest border been released into the United States?” Jordan asked.

“I will provide that data to you with respect to the disposition of each one. I do not know the answer to your question,” Mayorkas replied.

“The secretary of homeland security does not know the answer to the status of 42 individuals who came to our southern border illegally, are on the no-fly list and the terrorist watch list,” Jordan said. “You do not know whether they have been released or not into the country. That’s your testimony.”

6. ‘You Should Be Impeached’
Multiple Republican lawmakers called for the impeachment and removal of Mayorkas, even going as far as to call his handling of border security treasonous.

“Americans are mad and they are particularly mad at you,” Rep. Ken Buck, R-Colo., said.

Talking to constituents, Buck said, he learned that many believe Mayorkas has acted intentionally to make the southern border less safe, an action some consider “treason.”

Americans are seeing a “literal invasion of lawless masses flooding over our border from more than 160 countries,” Johnson said later in the hearing.

“The safety and security of the American people are being directly threatened, and innocent children, sir, are being abducted, assaulted, raped, and murdered by human traffickers,” he told Mayorkas.

Johnson called for Mayorkas’ resignation last summer, saying the homeland security secretary appeared “unable or unwilling” to do his job.