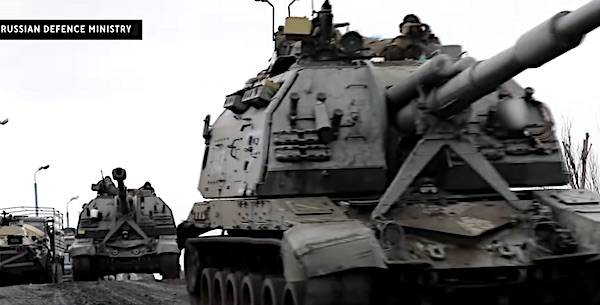 A posting on a Chinese website charges that Russia's attack on Ukraine "violated the basic rules of human civilization."

And it urges the world to look beyond Vladimir Putin's reign.

China, which is known to have reached multiple agreements with Russia over food and energy purchases in the days leading up to the February invasion of Ukraine by the apparently partly conscripted Russian army, hasn't made many significant public statements about the conflict, although it has called some of the reports of heinous massacres disturbing.

But according to a report from the Middle East Media Research Institute, the more volatile messaging appeared on the weixen.qq.com website.

And it had not yet been removed by the Chinese Communist Party's "cyberpolice," the report said.

"The article stated that Russian President Vladimir Putin had signed a joint statement with Chinese President Xi Jinping that offered several conditions for China's satisfaction. The reason for this was given as Putin's manipulation of China in order to trap Beijing into an 'evil-like and unkind position' in the war on Ukraine.

"However, the articles stresses that China will never attack Ukraine, stating: 'It is this war that violated the basic rules of human civilization, which brought the whole of Russia into a boundless abyss while bringing huge humanitarian disaster to the Ukrainian people. And it was opposed by all the people who love peace in the world, including the Russian people,'" the report said.

"It now seems that Russia's failure is only a matter of time," the article warned. "There should be no doubt about it. For international strategists, they already start to consider how to clean up Russia's post-war mess and enter the post-Putin era."

The article pointed out, MEMRI reported, that Feb. 4, 2022, won't be remembered as the day of the Winter Olympics in Beijing, but of the day "the Russian president made a historic visit to China."

An agreement between the two nations gave China "almost got everything it wanted – that is to say, almost all of China's international diplomatic demands have been fully supported by Russia, which was unimaginable in the past."

"Including the Belt and Road, origin-tracing of the novel coronavirus, Taiwan issue, Fukushima nuclear wastewater in Japan, big data, informatization (Russia not only clearly stands with China, but also expressed its willingness to 'deepen' the 'cooperation' between the two countries in informatization), the Shanghai Cooperation Organization, ASEAN, etc.," the report said.

It continued, "But what did China give Russia? China didn't seem to give much. In addition to both sides recognizing Taiwan as China's territory since ancient times, there are two main points. First, the two sides oppose the continued expansion of NATO and call on NATO to abandon the Cold War ideology, respect the sovereignty, security, interests and diversity of civilization, history and culture of other countries, and treat the peaceful development of other countries in an objective and fair manner. Second, China understands and supports the Russia's proposal to build a legally binding long-term security guarantee in Europe."

The article pointed out that Qin Gang, the Chinese ambassador to the U.S., later published an article in the Washington Post denying China knew anything of Putin's agenda or war plans.

"Let me say this responsibly: assertions that China knew about, acquiesced to or tacitly supported this war are purely disinformation. All these claims serve only the purpose of shifting blame to and slinging mud at China. There were more than 6,000 Chinese citizens in Ukraine. China is the biggest trading partner of both Russia and Ukraine, and the largest importer of crude oil and natural gas in the world. Conflict between Russia and Ukraine does no good for China. Had China known about the imminent crisis, we would have tried our best to prevent it," he explained.

The article accused Russia of violating "the conscience and justice of mankind" as well as the "basic rules of human civilization."

"As a country, China has suffered from wars and aggressions. So China deeply feels the great pain brought to mankind by war. At the same time, China is very peace-loving and has very deep and painful memories of such so-called 'special military operations.' Any Chinese who has a conscience and memory of history should strongly condemn this war of aggression which has brought great suffering to the Ukrainian people. In the face of human conscience, in the face of right and wrong, the response should be clear and unambiguous."

The article went further, suggesting Russia cannot win, that "there should be no doubt about that."