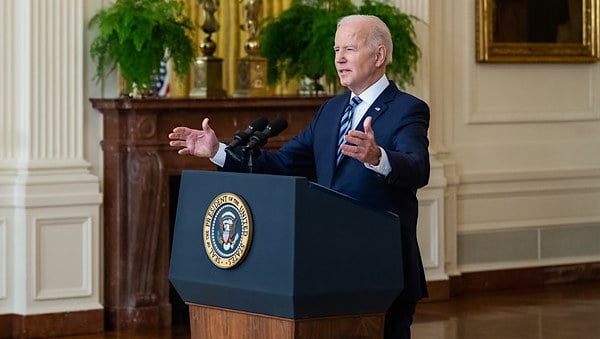 President Trump openly clashed with members of the American legacy media, calling them out for their bias and favoritism, multiple times.

He ended up describing them as the enemy of America, and he still gets criticized for his opinions about those corporations that openly promoted the now-debunked Russian collusion conspiracy theory that Democrats created to use against him.

But now there's another resident of the White House. And he, too, is lashing out angrily at the media.

The Hill reports that Biden has condemned media magnate Rupert Murdoch, who created Fox News, as the "most dangerous man in the world."

That description comes from a forthcoming book by people who also write for the New York Times – one of Trump's frequent media targets.

CNN reported it got excerpts from the book called "This Will Not Pass" by Jonathan Martin and Alexander Burns, and they show Biden claimed Fox News was "one of the most destructive forces in the United States."

Fox News, of course, is one of the more prominent media outlets to feature voices that question the Biden agenda, not just repeat its talking points.

The book apparently said Biden claims Fox is a "torrent of anti-Biden programming, stoking skepticism about vaccines and disseminating wild conspiracy theories about the January 6 attack."

CNN reported Biden's comments to Martin and Burns are the first he's made publicly about Murdoch.

The Hill said the White House and Fox didn't respond to requests for comment.

But the report explained since he announced his candidacy, Biden "has regularly sparred with Fox News reporters."

It's because they have asked questions about his son Hunter Biden's overseas business scandals, including payments from questionable sources in China and Russia.

Also, Fox News has been one organization unafraid to point out the evidence of mental instabilities in the president, shown by his verbal failures and more.

"Biden in January infamously was caught on a hot mic chiding Peter Doocy, once of Fox’s White House corespondents, calling him a 'stupid son of a b----' after Doocy had asked a question about inflation," the report said.

Acccording to Mediaite, many Biden fans also have attacked Fox for the same reasons, and they blame Rupert Murdoch and his son Lachlan, now the company's CEO, for allowing on the air hosts like Tucker Carlson, who has been uninhibited in his criticism of Joe Biden.