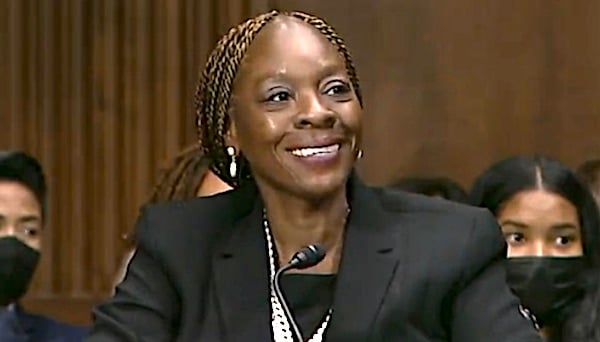 Abudu, the strategic litigation director at SPLC, said she joined the organization in February 2019.

“2019 was the year the SPLC paid $3.4 million in response to defamation lawsuits. 2019 was the year Charity Watch gave your organization an ‘F’ rating. The SPLC has been labelled by the left-wing policy journal Current Affairs as an outright fraud that uses willful deception designed to scare liberals into writing checks,” Hawley said.

The SPLC publishes an annual “Hate Map” which features several conservative and Christian organizations, including the Family Research Council (FRC), which was targeted in an attempted mass shooting in 2012, Fox News reported. The shooter, Floyd Corkins, saw the FRC on the map, which is labeled as anti-LGBTQ, in the lead-up to the shooting, CNN reported.

“I can’t believe you’ve been nominated for this position. I can’t believe that the President of the United States would nominate someone from [the Southern Poverty Law Center] with this record,” says @HawleyMO to Biden’s latest far-left judicial nominee pic.twitter.com/JBI9z4YaXP

“The progressive journalist Alexander Cockburn said this about SPLC: ‘I regard it, the southern poverty law center, collectively as one of the greatest frauds in American life,'” Hawley said. “Liberal death penalty abolitionist Stephen Bright refused to accept an award named after the founder of the SPLC, saying in his words ‘the SPLC has long been run by a conman and a fraud.’ Also in 2019, SPLC employees told the press, ‘We were part of a con and we knew it.’”

Hawley grilled Abudu about the organization’s record and asked if she was concerned by the criticism SPLC had received, prompting her multiple times to answer the question directly.

“Senator, again, my work with the Southern Poverty Law Center has been to uphold the constitutional rights of individuals who without pro bono counsel would not be even able to have access to justice,” Abudu responded.

The SPLC did not immediately respond to the Daily Caller News Foundation’s request for comment.