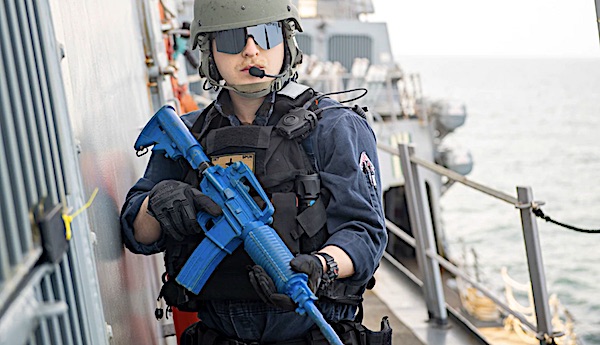 Chinese military forces reportedly stalked a U.S. Navy destroyer as it passed through the Taiwan Strait on Tuesday, according to an announcement from the People’s Liberation Army.

Colonel Shi Yi of the People’s Liberation Army (PLA) Eastern Theater Command announced his military was on high alert monitoring the USS Sampson guided-missile destroyer as it sailed through the Taiwan Strait, according to an official Chinese language PLA bulletin.

“All too often the U.S. carries out such provocative operations, sending a misleading message to the ‘Taiwan Independence Faction’ in a deliberate destruction of peace and stability in the Taiwan Strait, which we resolutely oppose,” the colonel said, according to a Daily Caller News Foundation translation of the PLA bulletin.

The People’s Republic of China maintains that Taiwan is an “island of the motherland” and Xi Jinping has repeatedly vowed that “reunification” with Taiwan is a prerequisite for realizing the Chinese Dream of “national rejuvenation.”

The PLA Navy reportedly responded to the USS Sampson’s arrival by directing a guided missile frigate and an amphibious landing ship through the Miyako Strait, according to the Times report.

The Miyako Strait is located roughly between Taiwan’s northeast tip and Okinawa, Japan, a stretch of sea which The Diplomat characterizes as a “critical chokepoint for Chinese military operations.”

The USS Sampson’s freedom of navigation exercise through the Taiwan Strait was confirmed by a Tuesday announcement from the U.S. Navy’s 7th Fleet.

The USS Sampson’s crossing was the fourth instance of a U.S. Navy vessel sailing through the Taiwan Strait in 2022, according to Stars and Stripes, a newspaper under the jurisdiction of the Department of Defense.