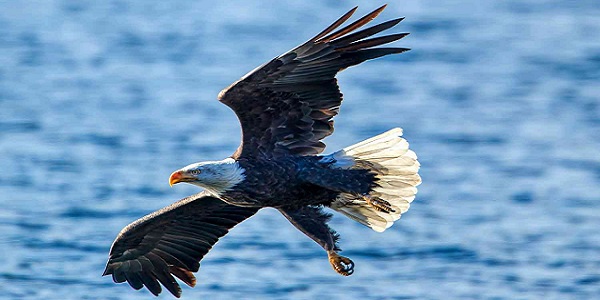 I’m old enough to remember when environmentalists cared about protecting our birds, bats, and whales. Alas, concern about protecting our wildlife has been lost amid the headlong rush to cover the countryside with oceans of solar panels and forests of wind turbines in the hope that they will save us from climate change.

For proof of that, consider the reaction – or rather the lack of reaction – to this month’s prosecution of NextEra Energy by the Department of Justice for multiple violations of the Migratory Bird Treaty Act by America’s biggest “green” groups.

First, some background. As I explained in a recent article, Florida-based NextEra, the world’s biggest producer of renewable energy, was sentenced to probation and $8 million in fines and restitution after the company pled guilty to three misdemeanor violations of the MBTA for killing at least 150 Bald and Golden Eagles at 50 of its wind projects in eight states. The company must also implement a plan to protect eagles which could cost another $27 million.

The prosecution is a big deal. It appears to be the first federal legal action against a wind company under the MBTA since 2014. Furthermore, the Justice Department's April 5 press release on the agreement with the company reads like an indictment: It says that NextEra repeatedly ignored warnings from federal authorities that its proposed wind projects in Wyoming would kill eagles. Despite the warnings, the company went ahead with the projects. The press release says the company showed “blatant disregard” for federal law. A close reading of the press release shows that the company repeatedly ignored warnings from federal officials about the deadly effect its wind project would have on eagles. Indeed, it’s clear to me that the company should have been charged with felony violations of the Bald and Golden Eagle Protection Act.

But none of these facts appear to matter to America’s biggest climate activist groups. The Sierra Club didn’t issue a press release on the matter. Nor did the National Audubon Society, Natural Resources Defense Council, or Environmental Defense Fund. The silence of the NGO-Industrial Complex shows that the biggest “green” groups in America are completely in the tank when it comes to renewable energy. They aren’t concerned about preserving rural landscapes. Nor are they concerned about the ongoing slaughter of our wildlife by the wind industry. Instead, they are focused almost solely on the issue of climate change mitigation. In their view, it seems, any wind turbine is a good wind turbine. Or put another way: we have to kill our birds and bats in order to save them.

The same attitude seems to prevail when it comes to protecting the endangered North American Right Whale. As I explained in these pages back in January, two foreign companies, Avangrid Renewables (a subsidiary of Spanish utility Iberdrola) and Copenhagen Infrastructure Partners are pushing the Vineyard Wind project, an 800-megawatt facility that would put dozens of massive wind turbines smack in the middle of right whale habitat. A study published last year by the New England Aquarium, NOAA Fisheries, and the Center for Coastal Studies found that 327 unique right whales have been spotted in the waters where the Vineyard Wind project is planned. That’s a huge number given that there are fewer than 500 North Atlantic right whales left on the planet.

Fortunately, a few groups are speaking out for wildlife. The American Bird Conservancy has been on the right side of MBTA enforcement for years. On April 7, the group’s president, Mike Parr, issued a blistering response to NextEra’s claims that it had “never sited a wind turbine knowing an eagle would fly into it nor have we taken any action in disregard of federal law." Parr responded, saying “the company seems to want to blame the laws and the birds for its violations...Blaming the birds is like directing cars to drive on the sidewalk and then blaming pedestrians for being run over. It is well-known that if you put turbines in eagle habitat, there will be fatalities.”

I interviewed Parr back in 2020 for a piece I wrote in Forbes about a Bald Eagle that was killed by a wind turbine in Ohio. At that time, Parr told me that his group is not anti-wind. Instead, he said it is seeking a “middle-ground” on regulations. But he also said that “The wind industry could prevent a lot of these bird kills, but they don’t...The regulations have all been undone in their favor and against protection.” Indeed, the prosecution of NextEra, while welcome, shows yet again, that the wind industry is still getting favorable treatment from federal regulators.

But it’s not just the big activist groups who are disregarding the slaughter of our wildlife. Eugene Robinson, a columnist for the Washington Post, published a column on April 18 in which he, in effect, defended NextEra. He wrote, “Using wind turbines to generate electricity, meanwhile, has a carbon footprint far smaller than that of coal, natural gas or even solar panels. I hate losing a single bald eagle. But I would hate even more losing our singular, endangered planet.”

Robinson, like the NGO-Industrial Complex, is ignoring the fact that NextEra acted deliberately and put its wind turbines in the middle of known eagle habitat so it could collect more subsidies. As the DOJ explained, NextEra “received hundreds of millions of dollars in federal tax credits for generating electricity from wind power at facilities that it operated, knowing that multiple eagles would be killed and wounded without legal authorization, and without, in most instances, paying restitution or compensatory mitigation."

Furthermore, while the DOJ says NextEra killed 150 eagles, that number represents only a fraction of the actual death toll. The DOJ's prosecution only focuses on NextEra's operations in eight states and it only counts the bird carcasses that have been found and determined to have been killed by turbines. That tally doesn't include the tens of thousands of turbines operated by other companies. Furthermore, biologists don't search the areas around wind turbines every day, and many of the birds killed by turbines are carried away by scavengers. Back in 2013, Joel Pagel, one of the U.S. Fish and Wildlife Service’s top raptor biologists, told me that the number of fully documented cases of eagles being killed by wind turbines represents “an absolute minimum”  of the actual number.

Wind turbines are also taking a deadly toll on bats, which are important pollinators and insectivores. A 2020 study by biologist K. Shawn Smallwood estimated turbines are killing some 2.2 million bats in the U.S. per year.

Robinson’s column in the Washington Post rhymes with that of other apologists for Big Wind who are eager to dismiss the industry’s subsidized slaughter of our bats and our most-iconic birds. Among their most-common excuses are that “it’s only a few eagles,” or “cats kill lots of birds.” These excuses are nonsense on stilts. Imagine the outcry if the oil and gas industry was killing our eagles at the same rate the wind industry is. Furthermore, house cats are not killing our eagles. Wind turbines are. And the more turbines get built, the more eagles will be killed.

I’m a proud birdwatcher and have been for more than 30 years. Over the past nine months, I have seen both the Bald Eagle and Golden Eagle in the wild. This spring, I’ve seen the endangered Golden-cheeked Warbler and other warblers here in Austin, including a confusion of Nashville Warblers in our yard. The Migratory Bird Treaty Act of 1918 is one of our oldest wildlife laws. I’m glad that the Department of Justice and the Fish and Wildlife Service are enforcing it even though America’s biggest NGOs don’t seem to care.

Their execrable silence makes me long for the old days when environmental groups cared for, you know, the environment.

Robert Bryce is the host of the Power Hungry Podcast, executive producer of the documentary, Juice: How Electricity Explains the World, and the author of six books, including most recently, A Question of Power: Electricity and the Wealth of Nations. Follow him on Twitter: @pwrhungry