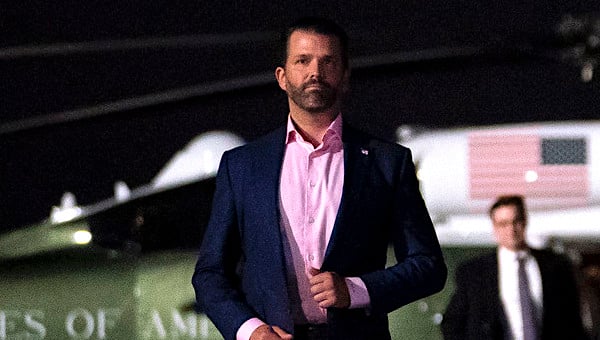 Donald J. Trump Jr. walks to board Air Force One at Dobbins Air Reserve Base in Marietta, Georgia, Tuesday, Jan. 4, 2021, for a return flight to Joint Base Andrews, Maryland. (Official White House photo by Tia Dufour)

Twitter is claiming the recent surge in followers experienced by right-wing accounts since Elon Musk’s takeover appears to be organic, but the picture may be more complicated.

Republican Twitter accounts saw a massive surge in followers after reports Monday that Twitter was on the verge of selling itself to Elon Musk, while the accounts of Democratic lawmakers shrank considerably, according to an analysis Tuesday by USA Today. Twitter claimed the wild swings in follower counts are organic and simply the result of new accounts being created and existing accounts being deactivated.

“We’ve been looking into recent fluctuations in follower counts. While we continue to take action on accounts that violate our spam policy which can affect follower counts, these fluctuations appear to largely have been a result of an increase in new account creation and deactivation,” the company said in a statement Wednesday to the Daily Caller News Foundation.

Twitter did not comment when asked to provide data supporting its claim or how it came to its conclusion.

Bouzy pointed out that several right-wing Brazilian politicians including President Jair Bolsonaro saw similar spikes in followers as American Republican politicians. Bouzy said this was evidence the surge in followers across conservative accounts may be due to inauthentic users, as Musk’s purchase of Twitter was unlikely to influence Brazilian Twitter users in the same way it may influence American Twitter users.

Is Twitter desperately trying to cover up its misdeeds before new management comes in?
99% (705 Votes)
1% (5 Votes)

“It’s just not adding up,” Bouzy said, referring to Twitter’s explanation for the swings. “We’re looking at the accounts and they don’t all appear to be legitimate.”

While I’m awesome and totally deserving of 87,000 new followers a day it seems that someone took the shackles off my account. Wonder if they’re burning the evidence before new mgmt comes in? pic.twitter.com/9Mso48qyNP

Other researchers agreed with Twitter that the swings were probably organic.

“It’s the most likely explanation,” Derek Willis, lecturer in data and computational journalism at the University of Maryland, told the DCNF, explaining that, if the sudden swings in follower counts were due to bots, there would be a record of previous fluctuations.

“Substantial swings in follower counts (and especially drops) among official accounts are very rare. Most of them don’t lose any or perhaps a handful of followers in a given day,” Willis said, adding that “with bot activity, this in theory could happen at any time. But it hasn’t.”

Over 70% of the official Twitter accounts belonging to Republican members of Congress grew in followers as of Tuesday morning, according to USA Today, with Republican Ohio Rep. Jim Jordan seeing the biggest bump of 63,735 followers.

However, of the 270 official Twitter accounts belonging to Democratic lawmakers, 268 lost followers, according to USA Today. House Speaker Nancy Pelosi and Vermont Sen. Bernie Sanders saw the biggest drops in followers, down 14,432 and 21,640 respectively.

“While I’m awesome and totally deserving of 87,000 new followers a day it seems that someone took the shackles off my account,” Donald Trump, Jr. tweeted Tuesday. “Wonder if they’re burning the evidence before new mgmt comes in?”