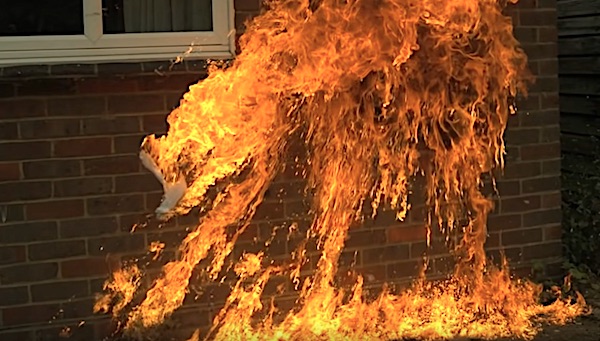 On Earth Day 2022, the U.S. Department of Justice announced that a suspect affiliated with the Earth Liberation Front has admitted to arson and arson conspiracies in the states of Oregon and California.

Officials with the DOJ identified the defendant in the cases as "Pacific Northwest environmental extremist, arsonist and former fugitive" Joseph Mahmoud Dibee, 53.

He pleaded guilty for his role in two arson conspiracies targeting commercial and government-owned animal processing facilities in Oregon and California, authorities said.

Court documents charged that beginning in October 1996 and continuing through December 2005, "Dibee and at least 15 other individuals affiliated with the Earth Liberation Front and Animal Liberation Front, loosely affiliated environmental extremist groups, knowingly conspired with one another to damage or destroy various commercial and government-owned properties."

The federal government explained the case: "Dibee and his co-conspirators held meetings to plan arsons of targeted sites, conducted research and surveillance of the sites and discussed their planned actions using code words and code names. The conspirators designed and constructed destructive devices which functioned as incendiary bombs to ignite fires and destroy targeted sites. During their self-described 'direct actions,' the conspirators dressed in dark clothing and wore masks and gloves to disguise their appearances. Some conspirators acted as lookouts while others were responsible for placing, igniting or attempting to ignite the improvised incendiary devices."

The targets included the Cavel West Meat Packing Plant in Redmond, Washington, which was destroyed by incendiary devices in 1997, and the Bureau of Land Management's Wild Horse Corrals in Litchfield, California, where a barn and its contents were destroyed.

The prosecutors said the radicals used Dibee's residence in Seattle to build the "devices."

Dibee and others were indicted in 2006 by a federal grand jury in Oregon, and later in California and Washington.

"The conspirators, together known as 'the Family,' were ultimately linked to more than 40 criminal acts between 1995 and 2001 and caused more than $45 million in damages," the DOJ charged.

While Dibee had fled the U.S. in 2005, he was arrested by Cuban authorities in 2018 and he was returned to the United States.

The government said it would recommend a prison term of 87 months, and a sentencing hearing is scheduled July 27 in Oregon.

The plea agreement that resolved the case includes Dibee paying restitution to his victims as the court orders.