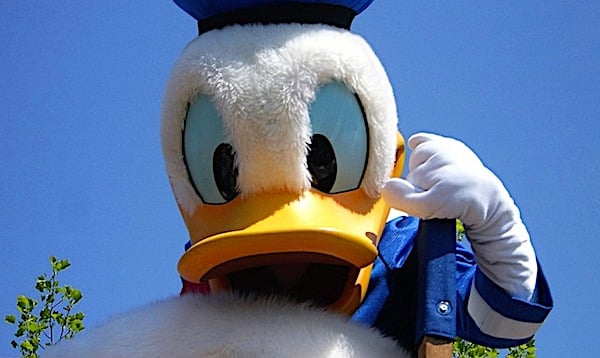 Lawmakers in Florida, responding to the Disney corporation's abrupt support for a pro-LGBT agenda for its children's products, are considering this week a move that would withdraw the entertainment giant's authority to make decisions for its own parks there.

Back when Disney moved to the state, a special district was set up, essentially giving the company its own government for its parks.

Now that status is in danger.

WFTV in Orlando reported this week lawmakers, in special session, are to be considering an end to the special provision given to the Walt Disney World Resort.

Republican Gov. Ron DeSantis confirmed the fate of the special district is now on the lawmakers' agenda

The report explained, "The purpose of the special session, which starts at noon on Tuesday and continues through Friday, is to redraw the state’s congressional maps after DeSantis vetoed the maps passed by the legislature during its regular session and called for a special legislative session to draw them again."

But the report said the "last-minute addition" of an option to "terminate" the special district follows tension created by the company when it blasted the state's Parental Rights in Education Law.

Critics have slammed it as the "Don't Say Gay" law even though it doesn't say that.

Should Florida yank Disney's special taxing district to prevent it from governing itself?
100% (55 Votes)
0% (0 Votes)

It is the Reedy Creek Improvement District that gives Disney authority to govern itself like a city.

A repeal would mean that authorities in Orange and Osceola counties suddenly would have oversight of the park and its activities.

It explained Disney's special district "was created by the Legislature in 1967. It spans two counties and 25,000 acres, and gives the company broad powers to control what happens on Disney property. Reedy Creek levies taxes and controls everything from roads to the water and electric systems in a 38.5-square-mile area covering four theme parks, two water parks, more than 40,000 hotel rooms and a slew of restaurants and retail stores."

"If Disney wants to embrace woke ideology, it seems fitting that they should be regulated by Orange County," Roach wrote at the time.

The state's law explains: "Classroom instruction by school personnel or third parties on sexual orientation or gender identity may not occur in kindergarten through grade 3 or in a manner that is not age appropriate or developmentally appropriate for students in accordance with state standards."

Multiple Disney officials have lashed out angrily at the state's effort to protect young children.

The Daily Caller recently reported that four Disney employees were among those arrested in a successful human-trafficking sting.

And WND reported Disney's "embrace of radical transgender activism largely is influenced not by disgruntled and activist employees but by the entertainment giant's biggest investors."

That's according to entrepreneur and political commentator Vivek Ramaswamy.

The author of 2011 New York Times bestseller "Woke, Inc.: Inside Corporate America’s Social Justice Scam" explained in a Fox News interview what he believes prompted Disney CEO Bob Chapek to speak out against Florida's parental rights legislation, which was mischaracterized by opponents as the "Don't Say Gay" bill.

He pointed out that the company's three largest shareholders are the nation's three largest asset managers, BlackRock, State Street and Vanguard Group. Together they manage more than $20 trillion, which is more than the GDP of the United States.

"Actually, if you’re a CEO in a public company today, you find yourself sandwiched not just between your progressive, woke employees," he said, but also the shareholders, who are "quietly whispering in your ear that they want to see you doing the same things too."

"So it runs far deeper, and it's far more complicated," said Ramaswamy, the executive chairman of the biopharmaceutical company Roivant Sciences.

Disney CEO Bob Chapek appeared to bend the knee to a small group of radical employees, but the real problem runs deeper: his top 3 "shareholders."

They represent a $20 trillion cartel that pushes companies to advance political agendas. And they're using your money to do it. pic.twitter.com/sXLDR9Bu5Y