Franklin Graham, who heads the worldwide Christian ministry Samaritan's Purse, says Disney has "gone too far" and now it's going to cost the company "big time."

His comments came over the weekend in response to the fracas that has developed in Florida over Disney's open advocacy for the LGBTQ agenda – and its attacks on the state of Florida for a law that protects young children in school from indoctrination efforts by those promoting transgenderism and the like.

"LGBTQ activists are using corporations to force their agenda on the public, and companies may want to take another look at what they are allowing to happen," he explained. "Disney has gone too far. The people of Florida have revolted, and it’s going to cost Disney big time."

He pointed out the state's decision to rescind a special district set up to allow the corporation great freedom to operate its businesses and parks.

"Disney had a special tax status in the state which they benefited from in a huge way—but because they came out against the parents of Florida, the governor and legislators have revoked that status," Graham wrote in an online post.

"What has happened at Disney is moral failure. Walt Disney had a vision for wholesome family entertainment. He was committed to the family," he said.

But now, "The morals of the corporate leadership of Disney today are in the gutter, and they want to redefine family counter to God’s original design and flaunt sin. Thank God for Gov. Ron DeSantis who is willing to take a bold stand. We need more leaders like him. God bless him and the Florida legislature."

He pointed out there's "a TON of fun things for families to do [in Florida] other than supporting Disney."

The Washington Examiner explained it was Disney's "outspoken criticism" of the state's "Parental Rights in Education Act" that provoked the war.

WND reported on Friday that DeSantis has signed legislation that eliminates the Reedy Creek Improvement District, that special government privilege that was created nearly 60 years ago and allowed the Disney megacorporation to run its parks and other properties in Florida essentially without government oversight. 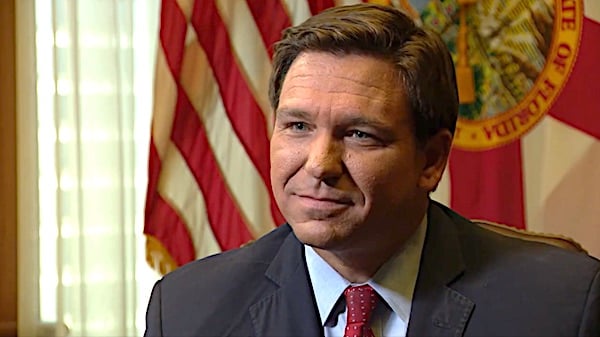 DeSantis had requested the legislation because of Disney's decision to bash a new state law that bans LGBT indoctrination in public schools for students in kindergarten through grade 3.

Joe Biden had, only hours earlier, lashed out angrily at the GOP for its provision to protect parental rights and children in Florida.

He was trying to raise money for Democrats when he blasted DeSantis and his state.

"Christ, they're going after Mickey Mouse," he said in a profane rant.

Earlier in the week, Colorado Gov. Jared Polis, a homosexual, invited Disney to move to the mountain state, claiming that there, the government doesn't interfere with the internal workings of corporations.

He was, however, wrong, as Colorado has actively attacked multiple Christian-owned companies for declining to violate their owners' faith standards by promoting homosexuality.

The state even famously earned a public rebuke from the U.S. Supreme Court for its interference in Masterpiece Cakeshop, whose owner, Jack Phillips, was ordered into a reindoctrination program by the state for refusing to promote homosexuality with his baking artistry.

The court gave Phillips the win in his dispute with the state because of Colorado's public "hostility" to Christianity.

Even now, Colorado is demanding to control how a web company, 3030 Creative which designs websites for weddings, runs its operations. The state is demanding the owner, a Christian, promote same-sex weddings online. The state even banned her from explaining she cannot do that because of her religious faith.

That case now is at the Supreme Court.

In Florida, Disney's operations now will be regulated by two counties, Orange and Osceola, in which its properties lie.

The counties then will assume all of Reedy Creek's assets, including taxing authority, and liabilities.

WND reported earlier when the House voted for the plan 68-38, after the state Senate adopted it 23-16.