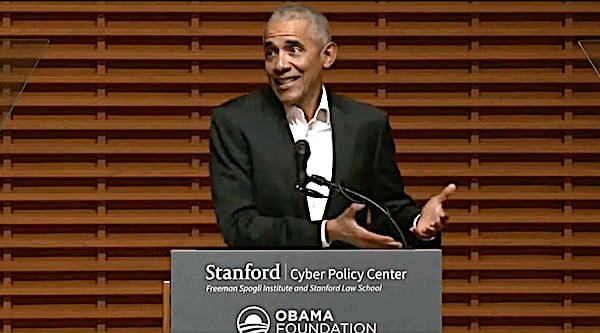 In a speech at Stanford University on disinformation, former President Obama scolds people who have chosen not to take the experimental COVID-19 vaccine shots. (Video screenshot)

In a direct appeal to the Silicon Valley tech giants to censor "misinformation" on social media, former President Obama on Thursday unwittingly affirmed the contention of critics of the COVID-19 vaccines that the fact that clinical trials have not been completed makes the people who have received the shots part of an experiment.

"Despite the fact that we have now essentially clinically tested the vaccine on billions of people worldwide, around one in five Americans is still willing to put themselves at risk, and put their families at risk, rather than get vaccinated," he said in a speech at Stanford University.

"People are dying because of misinformation."

The former president's remarks illustrate the danger of censoring "misinformation," if only because one person's misinformation might well be another person's evidence-based opinion or eventually become common knowledge.

Twitter, YouTube, Facebook and other social media platforms notoriously have censored the voices of some of the world's most highly qualified medical scientists because their views don't align with the ever-evolving government and establishment media position on the pandemic and related issues.

President Biden and CDC Director Rochelle Walensky, for example, assured Americans when the vaccines were rolled out that if you get vaccinated – for a disease that the CDC says has a survival rate of nearly 100% for people without chronic comorbidities – you won't get infected and you won't transmit the virus.

That hasn't turned out to be true, confirming the censored warnings of scientists such as Dr. Robert Malone and Dr. Peter McCullough, who in January observed the "crumbling" establishment narrative that included "false statements regarding asymptomatic spread, reliance on lockdown and masks – which obviously didn't work – the suppression of early treatment, the mass promotion of vaccines that failed."

And Walensky had to admit at a forum last month that the CDC exercised "too little caution and too much optimism" about the effectiveness of the vaccines in preventing infection, transmission and deaths. And she acknowledged science isn't "black and white," it's "gray," and "sometimes it takes months and years to actually find out the answer."

In February, suggesting Americans can't handle the "answer," unnamed CDC officials told the New York Times that the agency had withheld most of its data regarding COVID-19 for fear it would be misinterpreted by critics.

Regarding the vaccine "experiment," Obama and Biden administration officials don't mention the fact that clinical trials are ongoing for vaccines that came to market under emergency use authorization in less than one year while vaccines normally require a process that takes five to 10 years, in part because of the need to test for long-term side effects.

Among the thousands of pages of FDA documents on the Pfizer trials – which the agency was forced to release after pressing for a 75-year delay – is evidence the agency had concern about many serious side effects that a growing number of people now are reporting to have suffered.

Obama's comment Thursday about the clinical testing of the vaccines on the global population echoed a revealing remark by a member of the FDA vaccine panel last fall prior to a vote on whether to recommend the Pfizer vaccine for children ages 5-11.

Dr. Eric Rubin, editor-in-chief of the New England Journal of Medicine, reflected the reluctance of members to recommend the Pfizer vaccine for young children because of the lack of safety data. Rubin said that, for example, myocarditis is “a side effect that we can’t measure yet.” But he concluded the shots should be given to children anyway.

"We're never going to learn about how safe the vaccine is unless we start giving it," he argued. "That’s just the way it goes."

NOW - Obama: "Despite the fact that we have now essentially clinically tested the vaccine on billions of people worldwide. Around 1 in 5 Americans is still going to put themselves at risk... rather than get vaccinated." pic.twitter.com/w6KCFhAsXf

The New York Times reported on Thursday ahead of Obama's Stanford appearance that "in many private meetings and public appearances over the last year, the former president has waded deeply into the public fray over misinformation and disinformation, warning that the scourge of falsehoods online has eroded the foundations of democracy at home and abroad."

In his Stanford speech, the paper said, he was "expected to add his voice to demands for rules to rein in the flood of lies polluting public discourse."

It was under Obama that the Justice Department and the FBI pursued the Trump-Russia collusion hoax adopted by establishment media as the unassailable truth, while it now appears that it was Hillary Clinton who colluded with Russia to try to win the 2016 election, suggests evidence in a special counsel investigation.

Letting the data speak
Meanwhile, CDC and U.K. government data have indicated that the COVID-19 vaccines not only are ineffective in preventing cases and transmission, they rapidly lose protection against severe illness or death while posing risks.

Last month, a former adviser to the FDA commissioner who continues to serve in an oversight role said the agency is ignoring its requirement to disclose clear safety and efficacy problems with the COVID-19 vaccines. Also in March, an Army flight surgeon testified in federal court that she was ordered by high-level command not to discuss the controversy over Department of Defense data indicating a massive spike in serious injuries and illnesses among military personnel when the vaccines were rolled out in 2021. And, mounting reports of serious injury and death on the CDC's vaccine-injury website, an analysis of CDC data by a former Wall Street executive an an insurance industry expert shows an alarming rise in excess deaths among Millennials over the past year coinciding the COVID vaccine rollout.