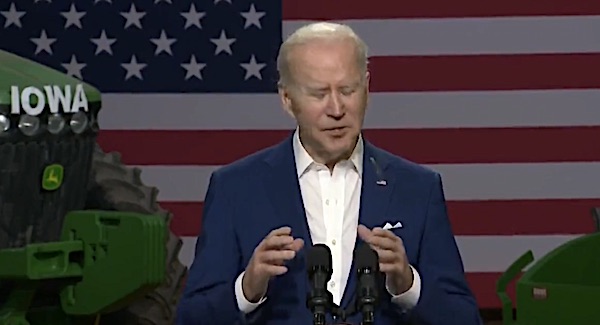 Did a bird poop on Joe Biden during his speech in Menlo, Iowa, on Tuesday, April 12, 2022? (Video screenshot)

UPDATE Monday, April 18, 2022 at 10:48 a.m. Eastern: A fact check by Politifact, one of Facebook's partners, indicates: "Something did stain the president's suit during his speech, but it was distillers grains, according to reporters in the room and the White House. A video clearly shows particles flying around from a giant, nearby grain pile."

Is it a message from above?

Joe Biden was the recipient of a "gift" from the heavens Tuesday when something dropped on him during his televised speech.

The president was speaking in Menlo, Iowa, during the first stop of his administration's new "rural infrastructure tour."

As Biden said, "It's not hyperbole. It's about being made in America," a dropping of something that itself was made in America suddenly appeared on the left shoulder of the president's blue blazer near the neckline.

And, of course, the video was posted on social media.

Did a bird just poop on Joe Biden? pic.twitter.com/p2Ywv8CbRU

UPDATE: While social media went wild with the video, fact-checkers at Politifact indicated: "Video from the scene clearly shows what one newspaper called distillers grains flying around from the top of a large pile near where the president was speaking."

The providential dropping is uniting Americans, with reactions online including:

Biden's dropping incident is reminiscent of a series of times when Barack Obama was bugged by flies and bees during his time in the Oval Office.

In fact, by 2013, the fly cases were so numerous, websites were asking if Obama himself were the biblical "Lord of the Flies."

WND's Jerusalem bureau chief Aaron Klein wrote at the time: "Religious and other websites are using the headlines to point out that a biblical reference for Satan, the Semitic deity Beelzebub, literally translates from Hebrew into 'Lord of the Flies.'"

As Obama nominated two new members of his second administration, a swarming fly stole the show.

"This guy is bothering me here," said Obama, who repeatedly swatted at a large black fly buzzing near his face.

It was not Obama's first brush with a fly while the cameras were rolling.

In 2010, he halted a speech about health-care reform as a fly zipped around him.

During a June 2009 CNBC interview, Obama killed a fly on camera.

"Get out of here," the president said with his eyes on the fly before the interview began. When the fly persisted, he killed it with a single blow.

A posting at the popular Free Republic Web forum discusses Beelzebub and asks, "Is the White House fly infestation evidence of demonic presence and influence there?"

At RevalationNow.net, a posting by "editorial staff" muses about whether Obama is possessed by a demonic entity.

"I feel like I am watching a horror movie and the secret evil character is revealed by the evil signs around him," the post reads.