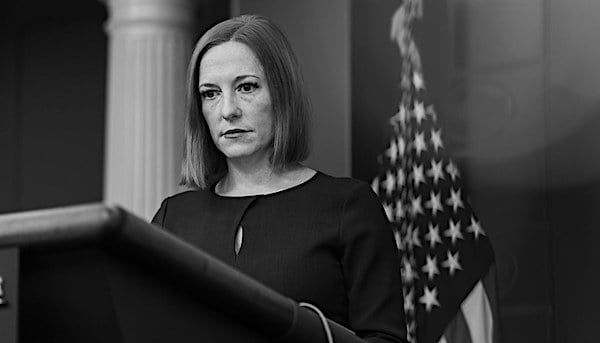 A watchdog group is calling for an investigation now into the actions of White House Press Secretary Jen Psaki.

According to a report in the Washington Examiner, she used the bully pulpit of her position at the White House to disparage a competitor to her expected future employer.

"Jen Psaki's reported efforts to secure a job with a major news organization while she serves as White House press secretary created a gauntlet of ethical obstacles," explained Michael Chamberlain, the director of the watchdog organization called Protect the Public's Trust.

"Despite her statements to the contrary, she appears to be willing to simply plow through without any regard to these additional obligations," he explained. "Her latest – the demeaning of Fox News, a competitor of her prospective employer, while seeming to act in her official capacity – appears to be a misuse of her official position."

He said it would be "hard to see" how the American public would not perceive the appearance of a conflict of interest.

Reports have circulated that Psaki soon will leave her White House position to join MSNBC as a commentator, reportedly after MSNBC won a bidding war for her with CNN.

"While federal law requires officials to recuse themselves from any particular matters involving prospective future employers, Psaki continues to interact with MSNBC and CNN reporters during televised press briefings," the report said.

And it was during an appearance on a leftist podcast that she was asked about and she delivered a blunt condemnation of Fox News, with whom she would be competing while working for MSNBC.

She charged during that interview that Fox News "might make anyone sound like a stupid son of a b****."

She was referring to Fox White House reporter Peter Doocy, who repeatedly has asked Psaki among the toughest questions she faces as a representative of the White House.

The Examiner reported the watchdog also wants released all records relating to Psaki's job negotiations, "including, but not limited to, records of any formal recusals, Stop Trading on Congressional Knowledge Act of 2012 (STOCK Act) notifications, and records of advice the White House Counsel's Office has provided to Ms. Psaki to aide compliance during her job search."

Other experts already had told the Examiner that Psaki's situation created major concerns.

Walter Shaub, who was an ethics adviser to Barack Obama, previously told the Examiner such situations "bother" him.

"There are some things a press officer might normally participate in that do directly affect the financial interests of a media outlet, such as deciding which outlets get credentialed to participate in White House briefings or giving an exclusive to one outlet, so I'm guessing they're requiring her to recuse from any of those types of activities," Shaub said at the time.

"I think the White House should take this opportunity to offer the public some transparency into its thinking," he said.

"I know it’s annoying to be asked tough questions, but it’s literally your job to answer them in that role, and you’d do better to be honest," Kelly said.

It was back on April 14 when podcaster Dan Pfeiffer asked Psaki about Doocy.

Psaki said, "Well, he works for a network that provides people with questions that -- nothing personal to any individual, including Peter Doocy -- but might make anyone sound like a stupid son of a b****."

Fox defended Doocy, explaining he comes up with his own questions and he is a "terrific reporter."

The Examiner explained, "This most-recent dust up between Psaki and Doocy has its roots in a January hot mic moment where President Joe Biden called Doocy a 'stupid son of a b****' after the Fox News correspondent asked him if inflation would be a 'political liability' in November’s midterms."