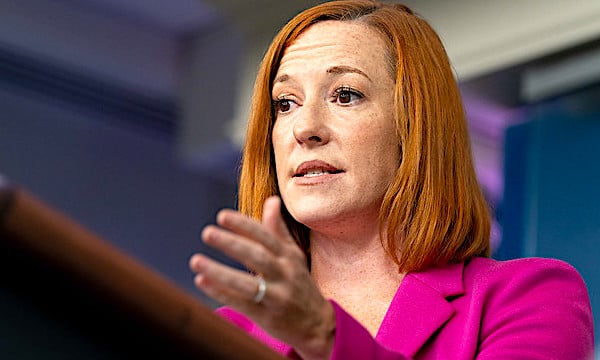 One of Joe Biden's biggest campaigns as president has been to promote gender fluidity: Boys can be girls and girls can be boys if they choose.

He's implemented that very practice in a number of ways, including by making accommodations for the gender confused in America's border policies and even working on new rules that would force doctors and nurses who have faith-based objections to mutilating the bodies of children with sex-change surgeries to do exactly that.

The newest evidence of his campaign is a statement that comes from his White House spokeswoman, Jen Psaki.

JEN PSAKI: Teachers should talk with kindergarteners about if they’re “a girl or a boy.” pic.twitter.com/CeDSEU0boX

She is objecting to a new law in Florida that prevents teachers of students in kindergarten through third grade from indoctrinating them in gender-swap ideology.

She claimed, "The law's not about teaching sex education. It's about teaching about gender identity. … What do you do if a parent or a kid … in one of the elementary schools … [asks] what about Sally. Sally has two moms. [or] I'm not sure if I'm a girl or a boy."

She claimed the children across America "are experiencing these moments in these lives."

RNC Research, which posted her comments online, said, "JEN PSAKI: Teachers should talk with kindergarteners about if they're 'a girl or a boy.'"

It is Walt Heyer, who transitioned from male to female and lived that way for eight years before transitioning back who wrote recently about teachers who were "coaching students into gender confusion" at a California school.

"One mother testified that the teacher gave a boy's name to her daughter without the mother's knowledge. Then when she met with the teacher to protest, the school called child protective services on her," he explained.

The teachers also were instructing others how to run a gender club in a school in a conservative community by hiding the true nature of their events from parents.

That, he said, is "cultural Marxism."

He bluntly charged that encouraging children into a transgender agenda is "child abuse."

That's the same conclusion from authorities in Texas, who have been instructed to investigate parents who are pushing their children into a transgender identity.

Heyer was equally blunt about the "treatment" imposed on children, as being "hideous and barbaric."

He cited the "puberty-blocking drugs" and "anabolic steroids" in preparation for the plan, to "butcher healthy body parts – genital removal for boys and mastectomies for girls. Most of the damage is irreversible and all of it is unnecessary."

He charged, "It’s vital to stand up for parental rights, to question indoctrination in schools, and to protect children."

One key, he said, being pursued by schools is to "destroy parental rights and student safety: Schools and school boards keep information from parents, such as allowing children to use different names and pronouns, wear different clothing and use restrooms of the opposite sex without alerting their parents."

Heyer was one of a long list of those who have experienced gender dysphoria to warn the Supreme Court to leave the legal definition of "sex" alone.

That was a few years ago when the issue was pending before the court, regarding the 1964 Civil Rights Act, that forbids discrimination based on "sex," meaning male or female.

It's one of the areas Biden has worked to redefine, so that "sex" would mean a perception of gender based on dysphoria.

The dispute also appeared recently on Tucker Carlson's Fox News show, when he interviewed someone who had been victimized and hurt by the transgender agenda: