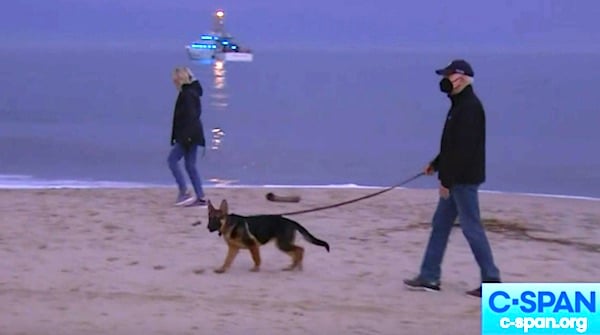 Joe Biden took in millions of dollars for book and speaking fees as soon as he left the vice president's office, where evidence now shows he routinely met with those business leaders from whom his son, Hunter, was taking pay.

He used some of those millions for a vacation home, and now he spends an estimated one-quarter of his time in his plush residences in Wilmington and Rehoboth Beach, in Delaware.

But, according to a new report from Just the News, the U.S. Secret Service doesn't have any records of who comes there to meet with, and potentially influence, him.

At least that's was the Secret Service says.

"The Secret Service, according to a New York Post report, kept no record of the president's official or unofficial visitors," Just the News confirmed. "The admission from the Secret Service came in response to a Freedom of Information Act request from the news outlet."

That original Post report explained the Secret Service "dubiously claimed" that there were no records of visitors to Biden at his Delaware estates.

The agency said it had no information to provide under the federal Freedom of Information Act because of that.

The Post documented that, "little is known about who stopped by for official meetings or less formal lobbying efforts — such as by members of his family and their associates."

The Post said it tried to get visitor log records, but Secret Service Freedom of Information Act officer Kevin Tyrrell claimed "[t]he Secret Service FOIA Office searched all Program Offices that were likely to contain potentially responsive records, and no records were located."

The complete absence of records was claimed at a time when Hunter Biden remains under criminal investigation for possible tax fraud and various other international business dealings.

That apparently is because he would "routinely seek[] business in countries where his father held sway as vice president," the report said.

Already, multiple scandals about the Biden family's international business dealings have come to light because of a laptop that Hunter Biden abandoned at a repair shop. Legacy media outlets claimed originally that it was "Russian disinformation" and suppressed its information.

That, a Media Research Institute study found, likely turned the outcome of the 2020 president election from President Trump to Joe Biden.

The Post confirmed, "Documents and photos from a laptop that formerly belonged to Hunter Biden indicate that he introduced his dad to business associates from China, Mexico, Russia and Ukraine — including at the vice president’s residence in Washington."

The report pointed out Biden was at his Delaware homes for 99 days during his first year in office, including events that constituted "official business."

"The president sometimes speaks about how his houseguests influence his views on policy. For example, in January, Biden said that a family friend gave him an education about rising prices amid four-decade-high inflation," the report confirmed.

He said, at the time, "I was sitting in my kitchen yesterday and here’s a sunroom off the kitchen and my wife was there with her sister and a good friend named Mary Ann. And she was saying, 'Do you realize it’s over $5 for a pound of hamburger meat? $5?'"

The group Citizens for Responsibility and Ethics in Washington previously fought for records of President Trump's meetings at Mar-a-Lago in Florida, and got some information, but it was not detailed, the report explained.

The Post noted that Tom Fitton, of the watchdog Judicial Watch, also has sued for presidential visitor logs, and ended up charging the Secret Service with playing a "shell game" – "potentially claiming that the Delaware logs belong to the White House rather than the protective agency."

Fitton said the agency knows who visits Biden at his homes, but is keeping that information away from the public.

It was Merrick Garland, now Biden's leftist attorney general, who wrote an opinion when he used to be a judge that presidents can pick and choose what they want to reveal through visitor logs.

The Post explained, "The links between Joe Biden and his son’s business ventures often are murky. Then-President Donald Trump’s defense team at his 2020 impeachment trial cited Obama-era visitor logs that indicated then-VP Biden met with his son’s business partner Devon Archer around the time Hunter Biden joined the board of Ukrainian energy company Burisma, where he earned a reported $1 million per year."

The report continued, "Trump attorney Pam Bondi argued that Trump should not have been impeached for pressuring Ukraine to investigate the Bidens because the elder Biden may have had his own hand in the deal."

Since then, other documentation – even photographs – have confirmed Biden, as vice-president, met with his son's associates multiple times while Hunter Biden was getting money from those associates.

Since Joe Biden became president, Hunter Biden has launched an "art career" through which he's seeking "as much as $500,000 from anonymous buyers of his novice works," the Post said.

That, the report found, is a situation which experts call "ripe for potential influence-peddling."