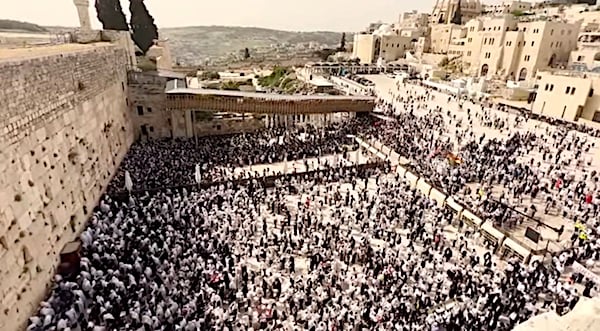 The bi-annual priestly blessing at the Western Wall in Jerusalem, Israel, on Monday, April 18, 2022.(Video screenshot)

One of the biggest news agencies in the world is being mocked for "incredibly poor journalism" after calling a Jewish priestly blessing at the Western Wall in Israel a "mass," a term referring to the main religious rite in the Catholic Church.

Reuters wrote on Monday: "Thousands of Jewish worshippers prayed at the Western Wall at a special mass called 'Priestly Blessing,' which takes place during the holiday of Passover, under heavy Israeli security."

Israel365News is reporting on the matter, with a headline stating: "Reuters thinks that Jews hold Catholic prayer ceremonies (seriously)." 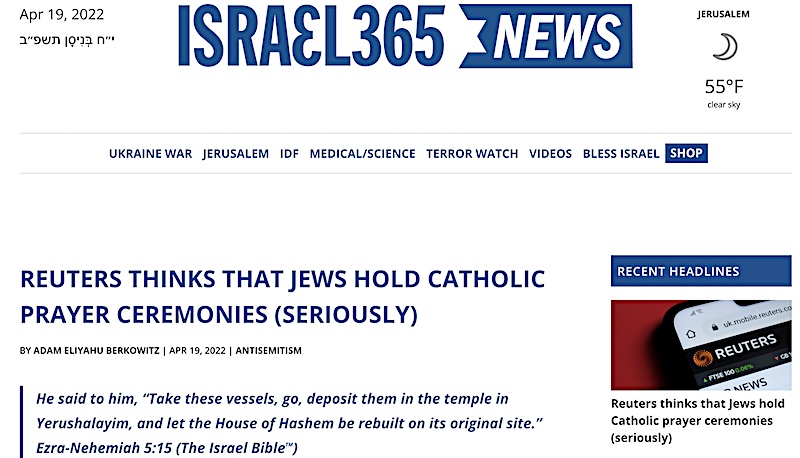 "Though the post could have been perceived as a typographical error, an amended headline posted three hours later was even more egregious," said Adam Eliyahu Berkowitz of Israel365News.

The second Reuters headline read: "At the holiday of Passover, thousands of Jews returned to the Western Wall after more than two years to pray at the Western wall at a special mass." 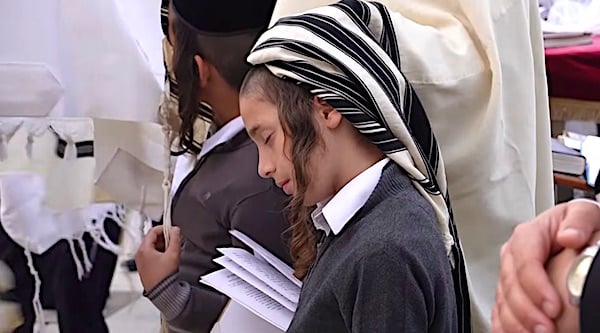 The media watchdog Committee for Accuracy in Middle East Reporting and Analysis, or CAMERA, publicized the error on its Facebook page, stating:

"Reuters, a mainstream wire service whose stories get carried in media outlets all over the world, posted a tweet referring to a gathering of Jewish worshipers at the Kotel as 'a special mass.'

"Is Reuters even trying anymore?" it wondered.

Reuters has since deleted its tweets, and updated its headline on its YouTube page to remove yet another reference to a Catholic mass, correcting it to "priestly blessing."

"Referring to Jewish prayer as a Catholic Mass can be understood in terms of replacement theology in which the Church replaced Judaism in the covenant with the God of Israel," reports Berkowitz.

"In replacement theology, the Vatican and Mass replaced the Jewish Temple in Jerusalem and the Temple Service.

"At the very least, it is cultural appropriation and incredibly poor journalism. Many of the social media responses from Israeli and Jewish people expressed a feeling of being insulted."

Hundreds of Bible prophecies have finally been unsealed! Learn what is never discussed in most churches, but should be!