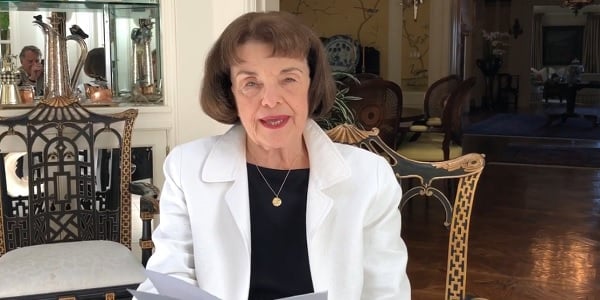 A recent report confirmed some Democrats, anonymously, have expressed high levels of concern about whether Sen. Dianne Feinstein, D-Calif., has the mental capability to continue to perform her duties in the U.S. Senate.

Those Democrats have not talked with Senate Majority Leader Chuck Schumer about their concerns, he has confirmed.

But he has had talks with Feinstein, himself.

"I've had a good number of discussions with Senator Feinstein, but I'm keeping them to myself," Schumer said, according to a new report from Fox News.

WND had reported earlier that Joe Biden, nearly an octogenarian, is well known for his diminishing mental capacity, and Nancy Pelosi, already an octogenarian, also has a history of those "deer-in-the-headlights" stares when she's lost her train of thought, and has simply stopped trying to complete a sentence.

The report said it was based on comments from one state lawmaker, four federal lawmakers and three former staffers. They were anonymous.

They said, the report confirmed, "they are concerned California Sen. Dianne Feinstein … can no longer fulfill her job duties..." They said it appeared her staff was doing much of the work.

In fact, some lawmakers reported "they had to reintroduce themselves to Feinstein multiple times during an interaction that lasted several hours."

And instead of addressing policy, the 88-year-old Feinstein repeated small-talk questions, without any "apparent recognition the two had already had a similar conversation."

The Chronicle reported, "The episode was so unnerving that the lawmaker — who spoke to The Chronicle on condition they not be identified because of the sensitivity of the topic — began raising concerns with colleagues to see if some kind of intervention to persuade Feinstein to retire was possible."

In a new interview, Schumer said no Democrats have approached him with concerns about Feinstein's health.

"Pressed about the reporting at a news conference Tuesday and whether Democratic lawmakers raised these concerns with him, Schumer said, 'No. They have not,'" Fox reported.

But the report pointed out that, "Schumer stopped short of offering a resounding endorsement for Feinstein's fitness for office."

The Chronicle reporting said Democratic lawmakers confirmed Feinstein's mental health is "bad, and it's getting worse."

Feinstein said any perceived failure could be attributed to the recent death of her husband.

"The last year has been extremely painful and distracting for me, flying back and forth to visit my dying husband who passed just a few weeks ago," she told Fox News Digital. "But there’s no question I’m still serving and delivering for the people of California, and I’ll put my record up against anyone’s."

The Chronicle said all of its sources wanted anonymity, because of their relationships with the senator.