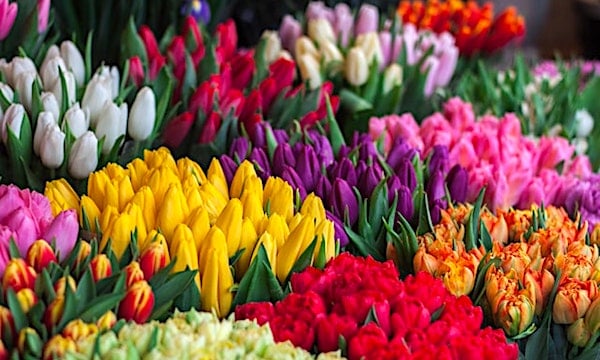 (Photo by John-Mark Smith on Unsplash)

Fresh cut flowers normally bring joy. But Andy Forde got nothing but grief when he tried to open a floral cart in Forsyth County, Georgia, north of Atlanta.

Forde got the business idea during the early months of the COVID-19 pandemic. “I noticed everybody was angry at this or that,” he says. “I see it in many places. But flowers make people smile.”

The venture was not his first attempt at entrepreneurship. Forde previously applied for permits to run a mobile hot dog stand, but regulators told him no. Undeterred, he swapped ketchup and mustard for daisies and roses.

He believed the switch would boost his chances for approval. “How could anyone oppose flowers?” Forde says. So he visited Forsyth County offices and got all the necessary paperwork.

That’s when he hit the first roadblock. The county required Forde to conduct land surveys, submit site plans and obtain tax records at each venue before rolling onto any property with his mobile shop, an Old West wagon with a canvas top.

Compliance might have been possible for a business anchored in one place, but Forde intended to move around. Discouraged, he returned to Forsyth County offices and met with the head of Planning and Community Development. The meeting did not go well, so Forde pivoted again.

He tried selling flowers in neighboring counties, but officials everywhere told him he needed a business license from his home jurisdiction. Forde returned to Forsyth County offices, but again met resistance. Despite his best efforts, the government nipped his dream of selling flowers in the bud.

Rather than accept this violation of his right to earn an honest living, Forde decided to launch his own War of the Roses. He reached out to our public-interest law firm, the Institute for Justice, which sent a letter to Forsyth County on March 31, 2022, demanding that officials reverse their denial of Forde’s business license.

Regardless of the outcome, the dispute will not affect the economy in any significant way. Forde is just one entrepreneur with modest plans for growth. But his case is not isolated. “Barriers to Business: How Cities Can Pave a Cheaper, Faster and Simpler Path to Entrepreneurship,” a new Institute for Justice report, shows out-of-control regulatory regimes from coast to coast.

Launching an Atlanta bookstore is not much easier, but entrepreneurs who persist at least have a chance. Many jurisdictions block mobile and home-based enterprises altogether — or set up insurmountable barriers that work the same as automatic rejection.

Officials in Buford, Georgia, for example, routinely block home-based businesses no matter what applicants do. Public records, obtained by the Institute for Justice, show recent rejections of a home-based craft business, a home-based real estate appraisal company, and similar enterprises.

Mobile vendors face additional challenges in Georgia — even when they acquire all the necessary licenses — because the state allows each county to set up its own rules. The regulatory patchwork means that mobile vendors must submit additional paperwork and pay additional fees every time they cross county lines.

“If you only have to do it once, it’s not too bad,” says Tony Harrison, president of the Food Truck Association of Georgia. “But you literally have to get 15, 20 or 25 permits.”

Forde cannot even get one permit in Forsyth County. He says officials told him they block mobile vendors because they want to protect existing businesses from competition. Beneficiaries might appreciate the favoritism, but picking winners and losers is not a legitimate public interest.

Other times, regulators have good intentions. They multiply rules because they want to help, but they end up doing more harm than good. Something similar happens when gardeners overwater their plants. They kill with kindness.

Either way, the result is the same for people like Forde. He wants to do something meaningful, but the county won’t let him. “It’s not really about the flowers,” he says. “It’s about meeting people, sharing some fun, and making a living.”

Instead of stifling growth, regulators should get out of the way and let businesses blossom.

Daryl James is a writer and Daniel Rankin is an attorney at the Institute for Justice in Arlington, Virginia.