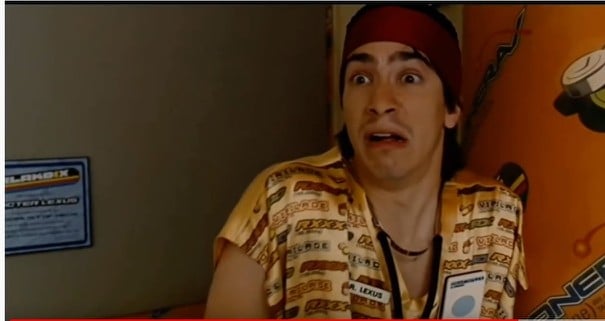 "Why come you don't have your COVID tattoo," he yelps, cowering in the corner. "Where's your bar code?"

In the film "Idiocracy," Mike Judge's genius of a satire (really a documentary, if you think about it), Luke Wilson plays Joe Bowers, frozen by the military in 2005, "who accidentally wakes up in 2505 to find a broken-down, thuggish America, where language has become a patois of football chants, hip-hop slang and grunts denoting rage, pleasure and priapic longing, where citizens are obese, violent, ever-horny and narcotised by consumerism." (As I said, a documentary. Citations here.)

The "dumb-a** dystopia" depicted in "Idiocracy" has evolved (devolved, rather) because low-IQ individuals, so robust, have out-bred the intelligent (yes, Judge openly references IQ as a measure of intelligence). Consequently, nothing gets fixed. There are garbage avalanches. A Gatorade-like drink has replaced water in irrigation. Because growers don't know better, nothing grows. 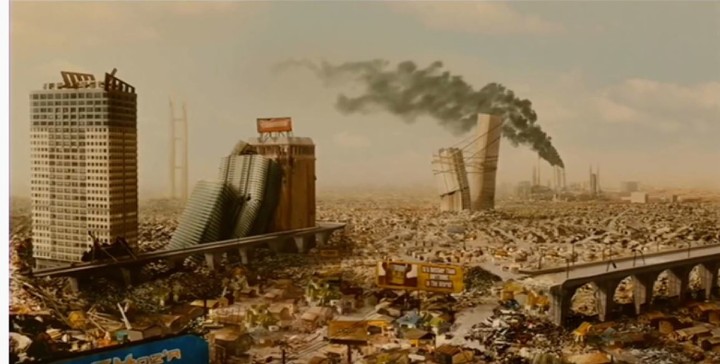 The most watched show on the "Violence Channel" is "Ow, My Balls!" The "highest grossing movie of all time is called 'A**,' and consists of 90 minutes of the same naked, hairy butt on screen." Audiences are enraptured. All enterprises are sexualized; Starbucks offers a "full body latte." Costco is an Ivy-League law school.

Or, a medical school, in my tale of woe. "Idiocracy" is the perfect metaphor for my own visit to a Washington state doctor's office.

I had scheduled an appointment with this "medical professional," in the Seattle area. When done right, these things consume time. There are elaborate forms to fill in, which I do meticulously online (especially given my allergies), in hopes of a better outcome in the office.

And the doctor's office has become its own obstacle course. Combine endemic, Idiocracy-like institutional rot, with the control COVID has bestowed on some exceedingly mediocre and malevolent minds – and one can never be too prepared.

In the case of this grubby little shop, the pronoun slot alone on the attendant patient forms ought to have been a portend of what was to come. My choice of pronoun would have been "grammatical" had that option been offered. Otherwise, I never dignify the pronoun charade. See below: 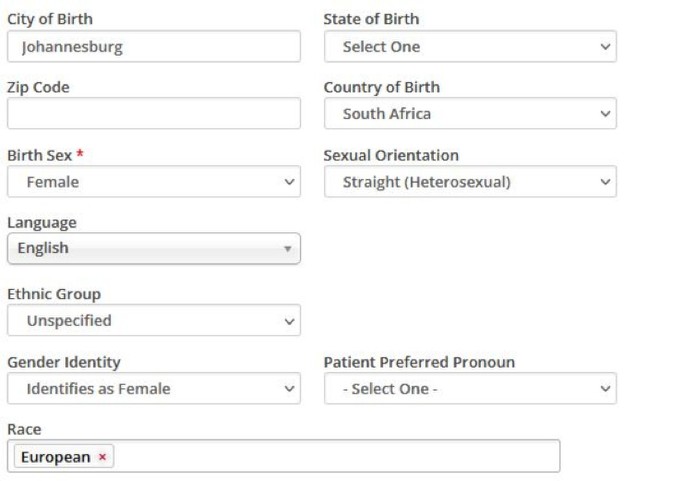 Exhaustive though it was, the "ethnicity" slot didn't offer the "Jewish" designation, which might have entitled me to a wee bit more grace from the graceless. Inappropriately prurient and medically unnecessary, in this context, information was solicited about the patient's sex life. These inquiries remained unanswered, obviously.

This was a consultation, nothing more. But this was also the state of Washington! On the Pacific Coast, kindness, congeniality and rationality don't come naturally. Neither does an adherence, it would appear, to the spirit of the Hippocratic Oath:

I will remember that there is art to medicine as well as science, and that warmth, sympathy, and understanding may outweigh the surgeon's knife or the chemist's drug.

State-of-Washington statists are generally aloof, opprobrious, insular, dour and, it would appear, deeply and studiously dumb. Unkind cuts are an everyday occurrence around here, where the busybody mentality prevails and where difference is deviance.

Stand still long enough, and they'll tell you how to live. They'll even give chase to deliver a "corrective" sermon. A helmeted cyclist once chased me down along a suburban running trail. My sin? I had fed the poor juncos in the dead of winter. (Still do. Bite me, you bully.) This, as the first homeless person just ensconced himself (or herself or its non-binary selves), with the accouterments of homelessness, on one of our little city's main streets, a thing no one, but no one, will protest.

Washington woke would sooner flout the spirit of the Hippocratic Oath than speak ill of the grotesquerie that is unfolding on our streets. Since the term "virtue signaling" has become a cliché – a term insufficient to the task – let me offer an improvement. The progressive's preening aims to emphasize his or her own providential purpose in the universe. To that end, progressives like to discredit the rest of us. That's more like it.

When the appointment was scheduled, not a word of warning was forthcoming about the inquisition, the third degree, that would ensue at the front desk on the day of the visit. I'm healthy, masked and without fever. That ought to have been the end of it.

It was not. Shoved in my face on a stark sheet of paper, bereft of the office's masthead, was the demand for my vaccination status. Well, of course. Doctor Lexus (diploma via Costco) wasn't owning this disgrace. This was nothing to boast about.

I refused to divulge my vaccination status.

A commotion ensued, as the front-desk collective drew closer, bristling with hostility. The scene was straight out of "Idiocracy." An unscannable, a person without a barcode, was loose among the human herd and it was desperate to recover the safety and security that comes with the warm smell of the herd.

Substitute "COVID" in the dialogue between Joe Bowers, the Idiocracy's protagonist, and the "tarded" Doctor Lexus, who discovers Bowers doesn't have the identifying, state-mandated tattoo – and you get an idea of the exchange I had with representatives of one of the Evergreen State's "tarded" doctors (language a bit salty):

Dr. Lexus (IQ around 60), whose speech embodies the best of Beavis and Butthead's repartee – his affect even better – first "listens" to his patient, Joe Bowers (who, with an IQ of 100, is the smartest person in America circa 2505). Bowers tells doctor he doesn't know what's going on. He's seeing things. It could be because of the drugs the Army put him on. Could the good doctor just get him well enough to get back to base (America circa 2005)?

"Right, kick-a**. … Your s--t's all retarded. What I do is like (stops for a Beavis and Butthead interluding chuckle as he loses train of 'thought'), err, like you know what I mean, like ah ah ah."

AND: "Don't worry scro," Doctor Lexus assures his panicked patient. "There are plenty tards out there living really kick-a** lives. My first wife was 'tarded; she's a pilot now."

Doctor (borderline retarded): "OK. It will be this many dollars. And if you could just go ahead and, like, put your [COVID] tattoo in …"

Joe (realizing the date on the bill is 2505): "That's weird. This thing has the same misprint as that magazine. What are the odds of –"

Yes, the office of the Washington doctor had encountered an unscannable: me. The process of rejection took time. First, greedy mitts reached for my medical insurance card, but were told (slowly), "No service rendered; no payment."

An exceedingly pleasant office manager then appeared. She presented the COVID Protocol on a plain sheet of paper, again without any identifying office markers but pock-marked with contradiction and medical disinformation. We talked through the contradictions to which the poor girl copped and for which she apologized, ashamed.

Me to Office Manager: You are aware that I could shed as much virus whether vaccinated or not?

Me: So, if I don't divulge my vaccination status?

She: You may come back when you are ready to.

Me: So, if I confess to being unvaccinated, will the doctor examine me?

OM: Yes, but he will leave the door open and the fan on.

Me: Having stripped me of my dignity, will he at least remove my mask, for that is surely necessary for a complete examination?

Me: That's not medicine. It also implies that I will be receiving inferior treatment and possibly an inferior outcome to a vaccinated individual.

She: I'm sorry. You are being very nice and polite about this. I just work here.

Unlike this medical Idiocracy, the wily little RNA strand that is COVID acts rationally.

The COVID index that matters is mortality; not the number of infected, with which we must learn to live. COVID is morphing in ways evolutionarily conducive to its long-term survival. It is, for the most – and just like the flu – living with its hosts, not killing them off.

The trajectory of a pandemic is such that it sees the infectious agent powering it become less lethal, not more lethal. COVID is thus now endemic. While the current BA.2 variant du jour is more transmissible, it is also much more benign than previous variants. It is as it should be. This, independent, honest epidemiologists will confirm. For their part, human beings have been acquiring natural immunity; and communities herd immunity.

The only deviants in this sad saga are those who've empowered themselves to deploy COVID as a cudgel against their betters.

Ilana Mercer
Ilana Mercer has been writing a weekly, paleolibertarian think piece since 1999. She's the author of "Into the Cannibal's Pot: Lessons for America From Post-Apartheid South Africa" (2011) & "The Trump Revolution: The Donald's Creative Destruction Deconstructed" (June 2016). She's on Twitter, Gab, YouTube & LinkedIn; banned by Facebook, and has a new podcast.
@IlanaMercer
The D-Bomb, realpolitik & Zelensky's self-serving 'heroics'
To hell with Iran, China & Hunter: Americans are suffering
The hell with Hunter: Call Joe in for hearings … on treason
Gov. Marvelous: Ron DeSantis delivers 'first principles' in action
Race and sex hegemons to control the skies
See more...