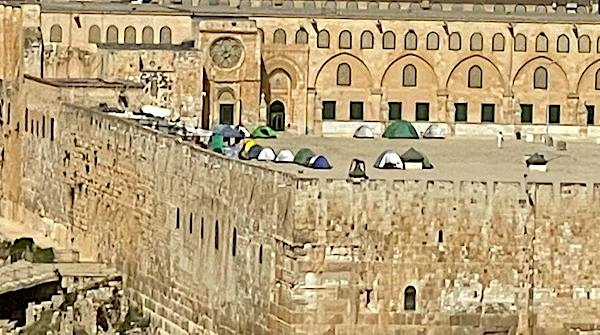 (ISRAEL365NEWS) -- A picture of a tent city erected on the Temple Mount has gone viral on social media in Israel.

The image, caught by Israel365 News‘ Josh Wander, shows a tent city adjacent to the Al-Aksa Mosque on the holy site. The mosque has been used as a headquarters for hundreds of Arab rioters who have attacked Israeli police since the beginning of Ramadan earlier this month.

It appears as though the tent city is being used to house the rioters during Ramadan, giving easy access to the mosque that they have essentially transformed into a makeshift fortress.

WND News Services
These reports are produced by another news agency, and the editors of WND believe you'll find it of interest.
Most populous state looks to keep last nuclear plant alive to stave off blackouts
Thieves crash car into luxury store in Beverly Hills, flee before police arrive
'Incendiary rhetoric': CNN has hissy fit over criticism of FBI
Not a joke: Look who says Americans should 'absolutely' trust FBI after Trump raid
Whitmer rakes in cash from Hollywood, billionaires while blasting others' 'special interests'
See more...