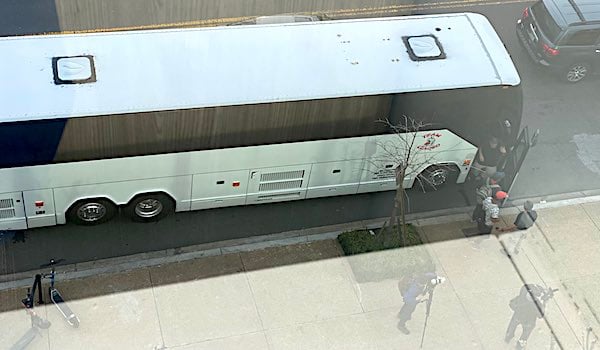 A bus carrying illegal migrants from Texas to Washington, D.C., pulls up right in front of the building that houses Fox News, NBC News and C-SPAN on Wednesday, April 13, 2022. (Photo courtesy John Roberts of Fox News via Twitter)

The first bus, which arrived in D.C. on Wednesday morning, had 24 migrants from Colombia, Cuba, Venezuela, and Nicaragua, and, the second bus, which arrived during the early morning hours on Thursday, had 14 migrants from the aforementioned countries, Abbott spokesperson Sheridan Nolen told the Daily Caller News Foundation. A third bus arrived with around 30 migrants on Friday morning, according to Fox News.

Abbott pledged April 8 that he would bus migrants to D.C. after the Centers For Disease Control and Prevention (CDC) announced it would lift Title 42, the public health order used to expel migrants during the pandemic.

Texas Governor @GregAbbott_TX carries out his pledge to transport illegal migrants to Washington, DC. The bus pulled up right in front of the building that houses @FoxNews , @NBCNews and ⁦@cspan⁩ pic.twitter.com/KsrP04LSuw

The migrants have to voluntarily choose to board Abbott’s buses. Once they arrive in D.C., the migrants are helped by groups like Catholic Charities, which gives them a list of programs and services they offer, and can offer to refer them to other nonprofits in the area, organization spokesperson Kate Kennedy to the DCNF.

After they have been dropped off at D.C.’s Union Station, the migrants are able to get train, bus or metro tickets to their destination.

It’s unclear how much the busing will set back taxpayers as the TDEM hasn’t provided information on the operation’s total cost, nor the cost of each bus trip.

Abbott’s office didn’t respond to a request for comment on the cost.

WND News Services
These reports are produced by another news agency, and the editors of WND believe you'll find it of interest.
Major city to pay for travel costs when its employees seek out-of-state abortions
More than 40 migrants found dead inside 18-wheeler in Texas heat
Susan Collins failed 'to do her homework,' former law clerk charges
Former Dem candidate accuses Biden of 'lying' to Americans
Man wins $100,000 testing lottery strategy he saw on TV
See more...