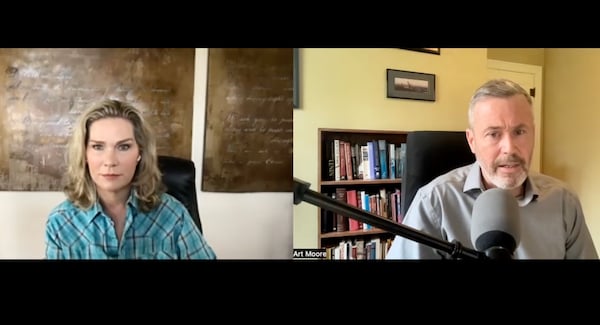 The conventional establishment narrative is that while there were instances of vote fraud in the 2020 presidential election, there's no evidence that there was enough to affect the outcome.

And if there were enough fraud to make a difference, how could that be proved?

In a video interview Thursday with WND, True the Vote founder Catherine Engelbrecht says that after more than 15 months of tedious investigation, she and her colleagues have a massive volume of hard data they will release to the public after their probe is featured in the upcoming film "2000 Mules," produced by Dinesh D'Souza.

The evidence – including cell phone location data, surveillance video and whistleblower testimony – supports the hypothesis, she said, that amid the many "dirty," out-of-date voter rolls and the unprecedented distribution of mail-in ballots, a highly coordinated operation in the key battleground states collected ballots and paid "mules" to literally stuff them in the unattended drop boxes that became a center of controversy.

And that evidence indicates that the fraudulent votes affected the outcome of the 2020 presidential election.

"The facts are the facts, and you cannot look away," Engelbrecht told WND.

She said the investigation – conducted with data analysts Gregg Phillips – identified non-profit groups at the nexus of the multi-state operation, which she described as a collection of "micro-insurgencies" involving thousands of "ballot traffickers" who engaged in patterns and modes of operation that "point to organization."

Engelbrecht said she is not at liberty to name those groups now, but they are identified in a complaint True the Vote filed in Georgia that prompted an investigation by the Georgia State Elections Board and Secretary of State Brad Raffensperger.

Earlier this week, Georgia state investigators issued subpoenas that signal they are engaged in a wide-ranging probe into the alleged ballot trafficking, Just the News reported.

Engelbrecht told WND she has been looking forward to the opportunity — after the film "2000 Mules" premieres next week — to "pull the rip cord" and release the evidence to the public.

"We're going to make all of this data, all of this video, available publicly for crowdsourcing," she said.

"You’re going to be able to see for yourselves."

And she expects much more to be found through the crowdsourcing, "because we only scratched the surface."

The surveillance videos alone provide clear evidence of criminal behavior, with numerous instances of people breaking Georgia law by putting more than one ballot in a drop box.

That presents Americans with "a moment of decision," she said.

The left, she said, will "stop at nothing, and if you let them get away with it, it's going to continue."

"Look, we're fighting for control of the free world. This is not a game. This is not for the faint of heart," Engelbrecht said.

Government will not correct itself, she emphasized, and nothing will happen if people think somebody else will take care of it.

"But the one thing they can't stop, and they never count on," she said, "is the rise of the American people to say, 'No more.'"

The subpoenas issued by Georiga officials target the possible source of funding for the operation and any eyewitness participants. The True the Vote complaint last November alleged that as many as 242 people illegally gathered third-party ballots during Georgia November 2020 election and subsequent U.S. Senate races.

The subpoenas seek the identities of the "network of non-governmental organizations that worked together to facilitate a ballot trafficking scheme in Georgia" as well as any information about 10 "hubs" the group alleged coordinated the ballot trafficking.