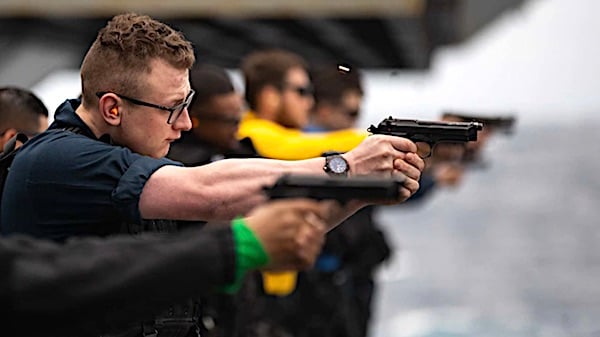 The Second Amendment Foundation is joining the arguments in court against the extraordinary process the state of Hawaii requires people to go through if they want to purchase a gun.

The organization announced it has filed a friend-of-the-court brief on behalf of consumers who, in Yakutake v. Hawaii, have challenged a couple of "cumbersome" state laws.

"This is a case," explains the brief, "where a state-actor purports to comply with the Constitution’s text and Supreme Court case law, while intentionally undermining the fundamental right at issue. In fact, Hawaii is only engaged in a kind of malicious compliance."

The foundation explained that in order for someone to purchase a gun in Hawaii, he or she "must first go to the police station to apply for a purchase permit. Then the applicant must wait 14 days for a background check. Next, the person must go back to the seller, show the permit—which is only good for ten days for a handgun and one year for a long gun—complete the transaction and within five days bring the firearm back to the police station for inspection."

The filing explains, "Hawaii has erected nonsensical hoops for gun-buyers to jump through to exercise a fundamental right. The passive-aggressive regulations at issue in this case are mirrored by remarkably similar barriers to voting that were struck down by the Supreme Court more than 50 years ago."

Alan Gottlieb, founder of the SAF, explained, "If law-abiding citizens were subjected to similar laws while attempting to exercise any other constitutionally-enumerated right, it would be an outrage. The requirements to merely buy a handgun are solely designed to discourage Hawaii citizens of doing so. The two Hawaii requirements are disgustingly obvious in their intent, which is why the District Court found for plaintiffs Todd Yakutake and David Kikukawa."

In fact, the district court that heard the case originally concluded Hawaii "had failed to produce any evidence to justify its scheme under any standard of review."

"It is alarming that such statutory requirements to impede and discourage gun ownership exist anywhere in the country," Gottlieb said. "Hawaii’s gun control scheme is deliberately complicated, and ultimately frustrating. It cannot be allowed to stand."

It's far from the only gun dispute that has developed in Hawaii. Several years ago WND reported on the state's ban on the open carry of firearms.

At that time, George K. Young Jr. challenged the state's latest version of a ban on the public carry of weapons.

It was lawyers Herbert Titus, Robert J. Olson, William J. Olson and others with William J. Olson P.C. who filed a brief on behalf of Gun Owners of America, the Heller Foundation, Virginia Citizens Defense League, Conservative Legal Defense and Education Fund and others opposing the state's demand for another hearing, after the court ruled against the state.

"Hawaii's petition for rehearing triumphantly declares that 'Hawaii has regulated the public carry of firearms for over 150 years,' pointing to various enactments in 1852, 1927, and 1934," the brief explains.

The state argues such restrictions have been widespread and longstanding.

"This is quite an assertion. ... For most of Hawaii's history, the island nation had no republican form of government – rather, it was a monarchy, ruled by kings and queens. Even after later transitioning to a constitutional monarchy, the Kingdom of Hawaii Constitution of 1940 did not recognize a right of the people to bear arms."