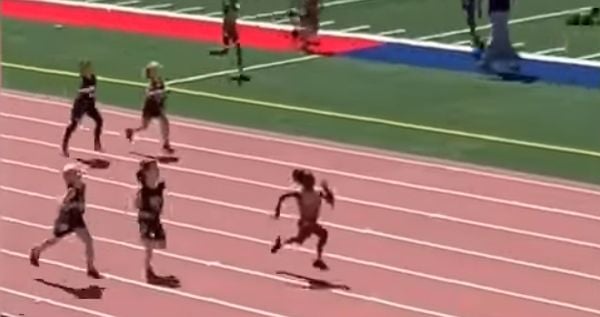 (ESPN) – Terence "Bud" Crawford – who has yet to lose a fight in his professional career (38-0, 29 KOs) – is in the midst of an astonishing rise in the boxing world, but it's the talent of his daughter, Talaya, which currently has our jaws on the floor.

On Saturday, 7-year-old Talaya ran out of her shoe on the starting blocks of a 200-meter sprint at her AAU track meet at Northwest High School in Omaha, Nebraska. While the inopportune start to the race would have been enough to make a less-determined individual give up, Talaya had different plans.

After doubling back and calmly putting her shoe back on as the rest of the pack sprinted away, she orchestrated a comeback effort worthy of mention alongside the Cleveland Cavaliers' 2016 NBA Finals victory and the New England Patriots' Super Bowl LI win – that's only slight hyperbole. Talaya closed the gap between her and the other runners, eventually overtaking the leader to achieve a comfortable first-place finish.