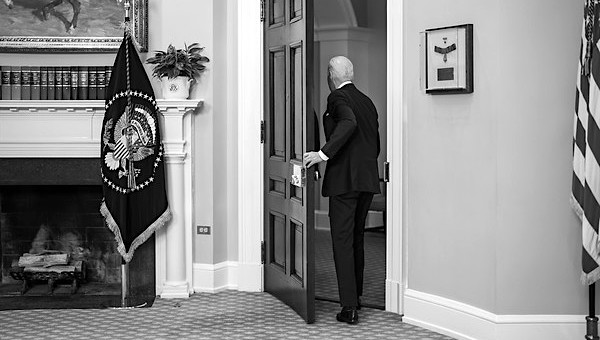 Joe Biden departs after delivering remarks on a successful counterterrorism operation in Northwest Syria, Thursday, Feb. 3, 2022, in the Roosevelt Room of the White House.(Official White House photo by Cameron Smith)

With inflation sky-high, workers’ real earnings falling, and interest rates expected to soar over the next few months, national employment numbers that continue to show, at least for now, a rebound from the steep, COVID-19-related recession of 2020 are practically the only economic indicator Joe Biden can still point to as evidence that his less than a year-and-a-half-old presidency hasn’t been a disaster for America.

But judging by his recent public statements, President Biden remains as determined as ever to destroy the current Right to Work protections in 27 states that are the main reason the U.S. employment picture isn’t totally dark in 2022.

In states that have Right to Work laws on the books prohibiting the termination of employees for refusal to join or pay dues or fees to a union they don’t want, and never asked for, aggregate employment is now roughly 880,000 higher than it was in February 2020, the last month before the COVID-19 lockdowns began, according to the U.S. Labor Department (DOL) household survey.

Meanwhile, in the 23 remaining forced-dues states as a group, DOL data show employment is still nearly 1.5 million below what it was pre-COVID-19.

Painfully slow employment growth is a long-term problem for states where firing workers for refusal to bankroll a union to whose monopoly-bargaining power they are subject remains permissible. Among the 22 states that had Right to Work laws in effect for the entire decade from 2011 to 2021, employment grew by an impressive 13.2%

Meanwhile, aggregate employment in the 23 states that still lack Right to Work statutes or constitutional amendments grew by just 5.7%, or less than half the Right to Work average.

No wonder elected officials who are genuinely committed to expanding employment opportunities for all Americans are currently fighting to build Capitol Hill support for S.406/H.R.1275, also known as the National Right to Work Act. This much-needed reform would ensure employees in all 50 states have the freedom to choose for themselves whether or not a union deserves their financial support. It would accomplish this end simply by repealing all the provisions in federal labor law that authorize compulsory union dues and fees.

But Biden has made it clear, again and again, that his plan is to take federal labor policy in the opposite direction.

During his 2019-20 campaign for the White House, Biden made his intentions plain in videotaped remarks addressed towards Teamster bosses and militants in Las Vegas: “We should change the federal law [so] there is no Right to Work allowed anywhere in the country.”

Since shortly after he entered the Oval Office early last year, Biden’s weapon of choice for effectively abolishing the Right to Work has been S.420/H.R.842, cynically mislabeled by proponents as the “Protecting the Right to Organize” (PRO) Act.

The common aim of this enormous bill’s many provisions is to make herding employees into a union as easy as pushing a button. And the most damaging “PRO-Act” provision of all states that the extraction of forced fees from employees for union monopoly bargaining, regardless of whether it benefits or hurts them personally, shall be “valid” notwithstanding “any State or Territorial law.” In simple terms, it repeals all state Right to Work laws across the country, even though there is ample evidence that such laws foster economic growth by protecting employees’ individual freedom.

Big Labor Speaker Nancy Pelosi’s (D-Calif.) U.S. House rubber-stamped the “PRO-Act” in March 2021, without hearing or testimony. But since then union lobbyists have been unable to ram this power grab through the U.S. Senate due to intense public opposition mobilized by the National Right to Work Committee and other groups.

Joe Biden doesn’t care what the American people think. And this year, even as the evidence mounts that Right to Work states are the bulwark that is keeping the U.S. economy from collapsing under his bumbling interventions, he keeps exhorting the Senate to ignore public opinion, “finally pass the PRO Act,” and “send it to my desk.”

These are the words of a President who is dangerously out of touch with economic reality.

Stan Greer is the senior research associate with the National Institute for Labor Relations Research. Nothing here is to be construed as an attempt to aid or hinder the passage of any bill before Congress or any state legislature.