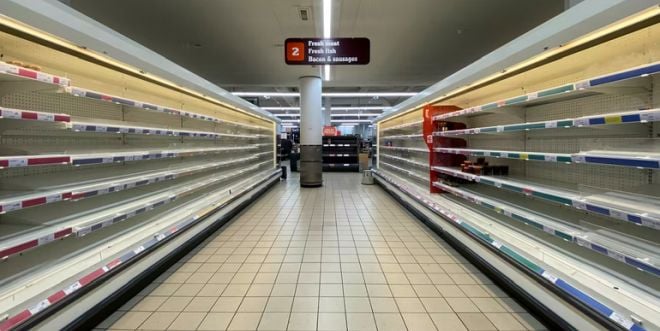 Joe Biden completely lost his cool during a speech at a union convention, going into a "rage" about food shortages under President Trump.

He asked audience members from the International Brotherhood of Electrical Workers to remember the lines of cars where people waited for "hours" for a box of food.

But his own claim, from just two years ago during the presidential campaign, assured Americans there was no "shortage" of food, it was just a shortage of leadership.

At Newspunch, a report called out Biden for the incident in which he "suddenly starts yelling about food shortages."

The report said Biden was angry and was "yelling about food shortages, caused by Democrat lockdowns, during the Covid pandemic."

"Remember those long lines you’d see in a television and people lining up in all kinds of vehicles just to get a box of food in their trunk? How quickly they forget people were hurting," he said.

Biden starts SCREAMING about food shortages... which are currently happening under his administration

A commentary at WLT said the speech was "extremely awkward and quite frankly it was disturbing too."

"Biden claimed while under the Trump administration people were waiting in line for boxes of food which couldn’t be any farther from the truth considering food shortages occurred directly after Biden took office," the commentary said.

But the facts are that there's a shortage right now, under his administration, of baby formula, a problem that's been in the headlines for weeks already.

Biden had bellowed, to union members, "God this is the United States of America! The idea that people would have to wait in line an hour, an hour and a half to get a box of food in their trunk, just unbelievable."

There was food handed out under President Trump. Many schools gave to students and their parents the breakfast and lunch items that they would have had at school, had those facilities not been locked down and locked up.

There also were shortages under President Trump, specifically of toilet paper, triggered by panic buying by the American public, when consumers would go and purchase four or five times of an item what they normally would buy.

Those glitches were worked out as the supply chain caught up at that point.

It was Fox News that said in 2020 Biden said, "We don't have a food shortage problem, we have a leadership problem."

Biden said, then, "We have plenty of food. It's being plowed under. You've got-- you're euthanizing cattle and pigs. They're out there making sure that they're pouring thousands of gallons of milk into the ground. It's not a food shortage. It's a lack of leadership-- a lack of leadership."

Such programs were used during the early part of the COVID pandemic, before much of the scientific community understood much about the China virus.

Biden did not mention the inflation, about 11% at the wholesale level, that is making it impossible for many Americans to buy the food that is in the stores, during the speech.

We don't have a food shortage problem — we have a leadership problem. pic.twitter.com/eFpJ8PGHGM

And, of course, whenever there's a pandemic like that from the Wuhan, China, coronavirus, it would be inevitable that there are glitches in the supply chain, including that for food.

.@PressSec says that economic and supply chain "challenges" were "inevitable" coming out of the pandemic. pic.twitter.com/o2t9tgBo8S

Back during the pandemic, President Trump repeatedly assured Americans there's enough food, it was just that the system of delivering it from field to wholesaler to store to consumer wasn't always smooth.

"You don't have to buy so much... Relax," he said. "We have no shortages, other than people are buying anywhere from three to five times what they would normally buy. There's no need for anybody in the country to hoard essential food supplies."