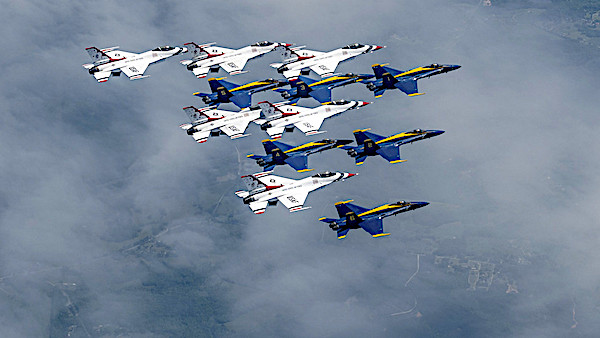 Joe Biden has told another of his stories in an address to the Naval Academy graduates.

And it wasn't even hours before its truthfulness was being challenged.

The New York Post said Biden reported applying for the academy, but bluntly said the dates claimed by Biden "don't add up."

"President Biden told graduating midshipmen at the Naval Academy Friday that he applied to the school in 1965 — but a quick check of his biography shows problems with the story," the report said.

Biden claimed he applied with a letter from then-Delaware Sen. J. Caleb Boggs, "but the year he cited – 1965 – is the same year he graduated from the University of Delaware."

"I was told the Class of ’72 is here. I was appointed to the academy in 1965 by a senator who I was running against in 1972 — never planned it that way. I wasn’t old enough to be sworn in. I was only 29 years old when I was running," Biden said. "He was a fine man. His name is J. Caleb Boggs. I didn’t come to the academy because I wanted to be a football star. And you had a guy named [Roger] Staubach and [Joe] Bellino here. So I went to Delaware.”

The post reported Bellino and Staubach are the only two Navy players to win the Heisman.

The report explained the U.S. was fully involved in Vietnam by the mid-1960s and had Biden gone to the academy, he would have needed to serve in the Navy on graduation.

Instead, the report said, he got five student draft deferments during his four years at Delaware and three years at Syracuse Law.

Biden also has claimed he has experience driving an 18-wheeler, but there's no evidence.

And he's also claimed, according to Real Clear Markets, that he grew up in a "family where the price at the pump was felt in the kitchen."

Only when Biden was growing up, "the price of gasoline was flat. At it was cheap."

In fact, a recent polling revealed that a huge number of Americans think Biden lied during his campaign just to get elected.

Paul Bedard in the Washington Examiner revealed the results of the Zogby poll.

He explained, "Voters are not buying President Joe Biden’s claim that he didn’t overpromise during the 2020 election but has been thwarted by the GOP, and they instead feel he lied just to get elected, according to a new survey."

The polling showed that 38.2% of the respondents said Biden has "delivered" on his campaign promises. But a plurality, 45.7%, said he was "was lying just to get elected."

The Gateway Pundit also reported now that as far back as 1987 a video showed "the many lies of Joe Biden."

In the clip, the much younger Biden claims to have graduated "in the top half of my class" before he later admitted to having graduated 76th in a class of 85.

Columnist David Harsanyi recently described how Biden "is compelled to lie about virtually every aspect" of a Georgia election law.

The comments came during Democrats' attempt to destroy the Senate filibuster and adopt their strategy to take over elections nationwide, and eliminate virtually all ballot integrity requirements from shore to shore.

Only weeks ago a report documented how Biden lies whenever he feels like telling one of his noted stories.

Like that one about the Amtrak conductor he had a conversation with, long after the conductor was gone from Amtrak. Or his house erupting in flames. Or his meeting with Nelson Mandela.

At that time, even the Washington Post took note of his falsehoods, with a "Four Pinocchios" for Biden's wild claim that he was "arrested" during a civil rights event.

According to Fox News, the "honor" went to Biden "over his false claim he was 'arrested' for the first time as a teenager while attending a civil rights protest in Delaware."

The Post's Glenn Kessler explained, "Biden claims yet another arrest for which there’s little evidence."

He wrote Biden, ahem, is "not always a reliable source."

Exaggerations? Whatever. It appears his claim doesn't "add up."

"I did not walk in the shoes of generations of students who walked these grounds. But I walked other grounds. Because I’m so damn old, I was there as well. You think I’m kidding, man. It seems like yesterday the first time I got arrested," Biden intoned in Atlanta.

In 2020, Biden was "forced" to admit that he made up a tale "of once getting arrested while trying to see Nelson Mandela in South Africa."

Fact Checker: Biden claims yet another arrest for which there’s little evidence https://t.co/tAFsyevN0i

But those incidents are far from all that contribute to Biden's reputation.

WND reported Biden's ability to – and apparent decision to – lie directly to the American public has been in display again and again.

Fox News reported on the time Chairman of the Joint Chiefs of Staff Gen. Mark Milley and head of U.S. Central Command Gen. Kenneth F. McKenzie confirmed they recommended the U.S. should maintain a presence of at least 2,500 troops in Afghanistan.

Political Editor John Daniel Davidson said it is a warning but lies share a lot of information with Americans.

"What we can conclude from this pattern of deception is simply that Biden does not feel the need to give straight answers about any decision he makes or policy he enacts," he wrote online at that time. "He will not be honest about what his advisers tell him or about what he intends to do on any given issue."

The Western Journal even reported when Biden claimed, falsely, about economic improvements under his watch.

"Rents are up. The cost of everyday items are up," a reported asked him. "Inflation in the U.S. is at a 13-year high. So when specifically should Americans expect those prices to come down?"

Biden claimed, "Things are a hell of a lot better, and the wages have gone up higher, faster than inflation."