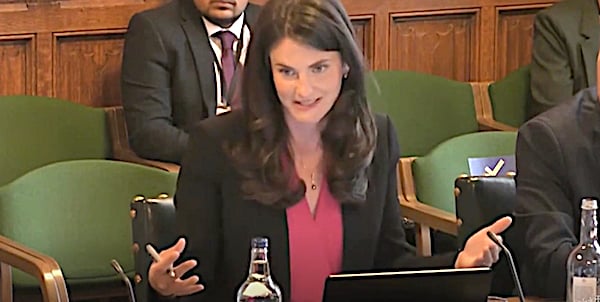 The director of the Biden administration's new disinformation board, Nina Jankowicz, advocated government-prescribed speech standards for online content during virtual testimony before the British Parliament.

Jankowicz told British lawmakers that in their censorship efforts they could seize user data from social media companies.

'Editing' tweets
On Tuesday, a video circulated on Twitter showing Jankowicz in an unidentified virtual meeting advocating having "trustworthy verified people" edit posts on Twitter that are contrary to establishment narratives.

She explained that as a "trustworthy verified" person on Twitter, she is eligible to do the "editing."

Jankowicz added that there are people who shouldn't be verified, "who aren't legit, in my opinion."

"They're real people, but they aren't trustworthy," she said.

"So, verified people can, essentially start to edit Twitter, the same sort of way that Wikipedia is, and add context to certain tweets," said Jankowicz.

As an example, she said, if President Trump were still on Twitter and made a claim about vote fraud, someone could "add context" from one of the 60 lawsuits or something an election official said.

Context would be added, she continued, "so that people have a fuller picture rather than just an individual claim on a tweet."

NEW - Biden's new "disinformation" czar wants "trustworthy verified people" like her to be able to "add context" to other people's tweets.pic.twitter.com/V4mLNsB5HV

Along with dismissing the Hunter Biden laptop story and the Wuhan lab-leak hypothesis, she promoted the fact-free dossier of Russian propaganda compiled by former British spy Christopher Steele as well as the false claim that Trump had a secret communication link with the Kremlin through a Russian bank.

In an interview, Jankowicz dismissed the concept of "the deep state" as an invention of the "conspiracy communities here in the United States."

“There is no deep state. I know because I work for the deep state, and they’re decent people” https://t.co/8MdLjyVMC6

Last month, DHS Secretary Alejandro Mayorkas testified to a House panel that the new new Disinformation Governance Board – dubbed the Orwellian "Ministry of Truth" by the Republican National Committee – will be tasked with countering disinformation regarding homeland security, particularly related to Russia and illegal immigration.

He said "the goal" of the new board "is to bring the resources of the department together to address this threat" of disinformation.