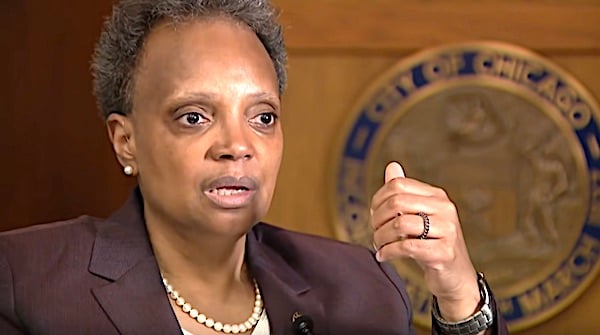 The Daily Caller News Foundation and reporter Thomas Catenacci scored a legal victory against Democratic Chicago Mayor Lori Lightfoot Monday after her office agreed to drop its policy of racial discrimination against journalists.

Conservative legal advocacy group Judicial Watch sued Lightfoot on behalf of the DCNF after she announced she would only take one-on-one interviews from “black and brown” journalists May 18, 2021. Her office did not respond to a May 20 interview request or two subsequent follow-up emails from Catenacci, who is white.

Lightfoot denied Catenacci’s request by “failing to respond in a timely manner,” the lawsuit argued, noting that Lightfoot was aware that Catenacci is “not a journalist of color.”

The DCNF agreed to dismiss the suit after Lightfoot’s communications director said their office had no plans to exclusively provide interviews to journalists of color in the future in sworn testimony March 3. This was a dramatic turnaround from a July interview after the lawsuit was filed in which Lightfoot told The New York Times she would “absolutely” racially discriminate again.

Lightfoot’s office reiterated that their policy would no longer include racial discrimination in a legal filing.

“I’m glad that Mayor Lightfoot finally realized that her racist policy was untenable. I hope all elected officials take note of our case and think twice before issuing similar policies,” Catenacci said.

“It’s amazing and sad that we had to do this in America 2022,” Daily Caller News Foundation Chairman Neil Patel said. “A government official discriminating based on race is as wrong as it gets. We are relieved that she finally relented.”

The lawsuit, which was filed by Judicial Watch in the United States District Court for the Northern District of Illinois, Eastern Division, alleged that Lightfoot’s denial violated Catenacci’s right to equal protection under the Fourteenth Amendment as well as his and TheDCNF’s First Amendment rights.

“It is incredible, in this day and age, that it took a federal civil rights lawsuit to force Chicago Mayor Lori Lightfoot to retreat from her racial discrimination against reporters,” said Judicial Watch President Tom Fitton.

Lightfoot’s office did not respond to the DCNF’s request for comment.