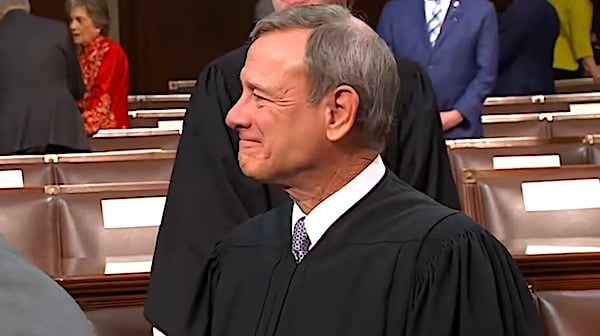 The chief justice of the U.S. Supreme Court has ordered police to investigate the source of a "draft" opinion that was leaked to the press that indicates the court's majority is ready to overrule Roe v. Wade and return regulation of abortion to the states.

The draft opinion was obtained by Politico, and it reveals – although as a draft it is not final – that at least five justices are ready to reject the shaky foundations of Roe nearly 50 years after it was created.

A statement from the high court said, "Yesterday, a news organization published a copy of a draft opinion in a pending case. Justices circulate draft opinions internally as a routine and essential part of the court's confidential deliberative work. Although the document described in yesterday's reports is authentic, it does not represent a decision by the court or the final position of any member on the issues in the case."

The statement included a comment from Chief Justice John Roberts, who said, "To the extent this betrayal of the confidences of the court was intended to undermine the integrity of our operations, it will not succeed. The work of the court will not be affected in any way."

He continued, "We at the court are blessed to have a workforce – permanent employees and law clerks alike – intensely loyal to the institution and dedicated to the rule of law. Court employees have an exemplary and important tradition of respecting the confidentiality of the judicial process and upholding the trust of the court.

"This was a singular and egregious breach of that trust that is an affront to the court and the community of public servants who work here."

He noted he has directed the Marshal of the Court to launch an investigation into the source.

It was Politico that obtained from a leaker inside the court a copy of a draft option written by Justice Samuel Alito that would, if it becomes final, simply throw out the pro-abortion precedents from 1973.

"We hold that Roe and Casey must be overruled,” Alito wrote in an initial majority draft circulated inside the court.

The report explained, "The draft opinion is a full-throated, unflinching repudiation of the 1973 decision which guaranteed federal constitutional protections of abortion rights and a subsequent 1992 decision – Planned Parenthood v. Casey – that largely maintained the right. 'Roe was egregiously wrong from the start,' Alito writes."

The report pointed out that the report is called a "draft," and justices have been known to change their opinions even late in the discussion process.

The case being decided is Dobbs v. Jackson Women's Health Organization, in which Mississippi adopted an abortion limit of 15 weeks, and that is being challenged by the nation's abortion industry.

Politico said, "The immediate impact of the ruling as drafted in February would be to end a half-century guarantee of federal constitutional protection of abortion rights and allow each state to decide whether to restrict or ban abortion."

It pointed out that no draft decision "in the modern history of the court" has been made public while a case is pending.

The draft states, "Roe was egregiously wrong from the start. Its reasoning was exceptionally weak, and the decision has had damaging consequences. And far from bringing about a national settlement of the abortion issue, Roe and Casey have enflamed debate and deepened division."

Politico continued, "A person familiar with the court’s deliberations said that four of the other Republican-appointed justices – Clarence Thomas, Neil Gorsuch, Brett Kavanaugh and Amy Coney Barrett – had voted with Alito in the conference held among the justices after hearing oral arguments in December, and that line-up remains unchanged as of this week."

The liberal bank of the court, Stephen Breyer, Sonia Sotomayor and Elena Kagan – are expected to dissent.

Politico said it got a copy of the draft opinion "from a person familiar with the court’s proceedings in the Mississippi case along with other details supporting the authenticity of the document. The draft opinion runs 98 pages, including a 31-page appendix of historical state abortion laws. The document is replete with citations to previous court decisions, books and other authorities, and includes 118 footnotes. The appearances and timing of this draft are consistent with court practice."

Monekypox virus: What to know