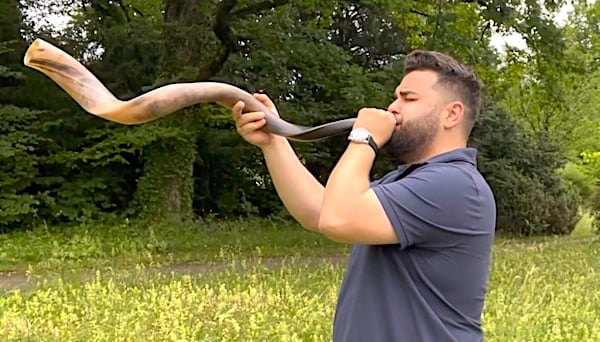 A man blows a shofar on May 23, 2022, outside the WHO World Health Assembly in Geneva, Switzerland. (Video screenshot)

(ISRAEL365NEWS) -- The U.N.'s World Health Assembly is the decision-making arm of the World Health Organization (WHO).

Delegations from all U.N. Member States attend the event. It is reported to hold an unprecedented vote whereby the WHO will assume control of all member state’s healthcare systems.

Jews and Christians who fear a one-world government with no checks and balances have sounded the alarm – or in this case, the shofar. Christians worldwide have united in a shofar ceremony with Israel365's Josh Wander to warn the world of a hostile takeover by blowing the shofar outside the WHO headquarters in Geneva, Switzerland. Wander is a Jew from Jerusalem. The concerned Christians he united with hail from countries such as Germany, Romania, and even Texas.